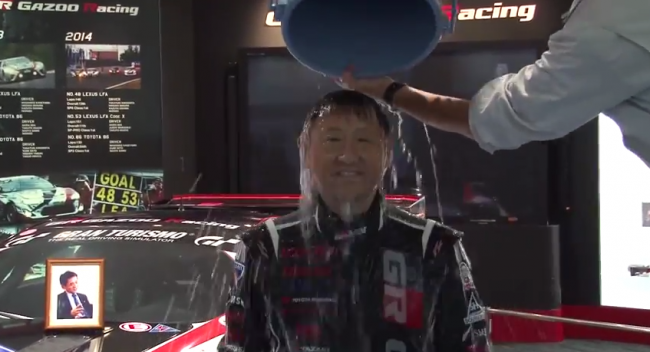 If you have an internet connection (or even just a TV or radio), you’re probably familiar with the ALS Ice Bucket Challenge by now. What started as a few people dousing themselves in icy water to raise money and awareness for charity went viral thanks to social media, hashtags, and plenty of celebrity endorsement. Some of our favorite videos so far have involved Dave Grohl and the Foo Fighters and Chris Pratt of Parks and Recreation.

But this is a blog about cars, so how is this relevant? Well, the ALS Ice Bucket Challenge is starting to reach auto makers as well as everyday folks and celebrities. Akio Toyoda, CEO of Toyota, was nominated by Yasushi Akimoto, a record producer, to take part in the challenge. Mr. Toyoda, having lost a close friend to ALS, was only too happy to step up to the challenge. You can watch his video below.

But Akio Toyoda isn’t the only Toyota employee who’s had the pleasure of being nominated and taking part in the ALS Ice Bucket Challenge. Julie Hamp, CCO of Toyota North American also took part, dedicating her soaking to Toyota NA, as well as her sister, who died from ALS last year. Hamp didn’t miss the opportunity to show off the Toyota fuel cell vehicle, either. She used the “emissions” (read: drips of water) from the car’s exhaust to top off her ice bucket before dumping it over her head. From a Toyota bucket, naturally.

Additionally, Toyota GB was nominated by Honda UK to take part, and sales director Ewan Shepherd and placement student Stilyana Podmolova were more than happy to step up. After being soaked with freezing water on what was probably a pretty chilly British summer day, they donated money to Macmillan Cancer Support, a UK-based charity.