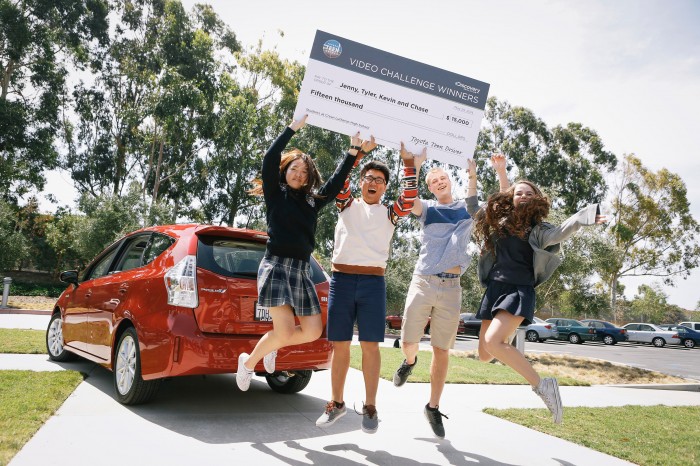 As technology advances, so do the number of distractions for drivers on the road—particularly teenagers. With the rise in the number of casualties caused by texting and driving, it’s more important than ever to urge teens to put down their cell phones and concentrate on the task at hand—arriving at their destinations in one piece. The Toyota Teen Driver Video Challenge asked students from across the United States to create short videos designed to inspire other teens to avoid cell phone use and other distractions while behind the wheel, and Toyota just announced the four winners—Jenny Kim, Tyler Koski, Kevin Kim, and Chase Masters—from Crean Lutheran High School in Irvine, California.

In the winning video, a young boy visits a tarot reader, who tells him that he has the power to change his future simply by avoiding driving distractions when he becomes a teenager. For their efforts in helping change the perspective of teen drivers, the winning team will get $15,000, plus the chance to work with a Discovery film crew to reshoot their video professionally. See the winning video below.

Second place went to Rachel Mallasch of Snoqualmie, Washington, who wins $10,000 plus a VIP trip for two to a show of her choice on Discovery’s Velocity network. Third place winner, Jake Martin of Amesbury, Massachusetts, gets $7,500. The challenge is currently in its third year.

Latondra Newton, Chief Corporate Social Responsibility Officer, Toyota Motor North America Inc., said, “At Toyota, we’ve had a longstanding commitment to offering programs and resources that help teen drivers stay safe and avoid distractions. This is the third year we’ve hosted the Toyota Teen Driver Video Challenge and once again, we were blown away by the level of creativity and passion that teens across the country brought to the topic.  All the entries were impressive, but we extend our heartfelt congratulations to the winners from Irvine, California.”