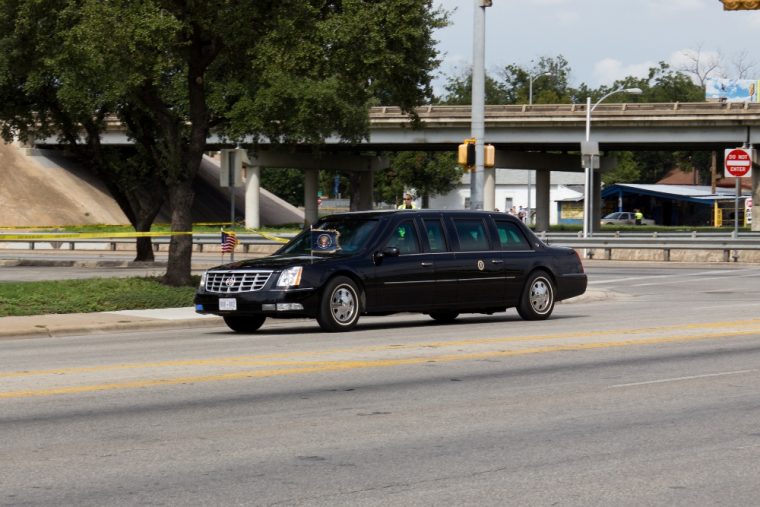 President Trump will be riding in Mr. Obama’s old limousine for the time being
Photo: © Steve

President Trump has owned a number of high-profile cars over the years, including a 1991 Acura NSX and 1997 Lamborghini Diablo VT, but now that he’s Commander-in-Chief that means he’ll be riding around in a heavily armored Cadillac limousine. There’s only one problem though: Cadillac still hasn’t put the final touches on Trump’s new ride, which means he’ll be cruising around in Obama’s old limo for at least a few months.

GM Awards: Did you know the Cadillac XT5 was named a Top Safety Pick+?

In November, Auto Week reported that a new Presidential limo would be making its debut on inauguration day, but Jalopnik revealed one day before the inauguration that this wasn’t going to happen. Jalopnik reported the limousine wasn’t being delayed and would still be debuting later this year. This is because Cadillac’s contract gives it the flexibility of delivering the presidential limousine within a specific window, rather than on a specific date. Fox News has reported that the completion date in Cadillac’s contract is March 30th.

There won’t be a new ‘Beast’ presidential limousine at tomorrow’s Inauguration after all https://t.co/qGISUNR3F9 pic.twitter.com/uXTookuHng

That means President Trump will continue using the armored limo that debuted back in 2009. Nicknamed “The Beast,” this limo is quite unique as it features eight-inch thick armor plating, five-inch thick bulletproof windows, and Kevlar-reinforced run-flat tires. In addition, the current presidential limo is powered by a Duramax diesel engine, according to Left Lane News. The automotive site explained this is because diesel is less volatile, making it not as likely to explode.

Spy photos have revealed that the new Cadillac limo will have a front end that resembles the Cadillac Escalade SUV. This is in contrast to the current presidential limo that’s based on the discontinued STS sedan.

Cadillac has built armored limousines for each US president since 1993. The last president to ride in a non-GM limo was George H.W. Bush. He instead used a Lincoln Town Car-based limo.