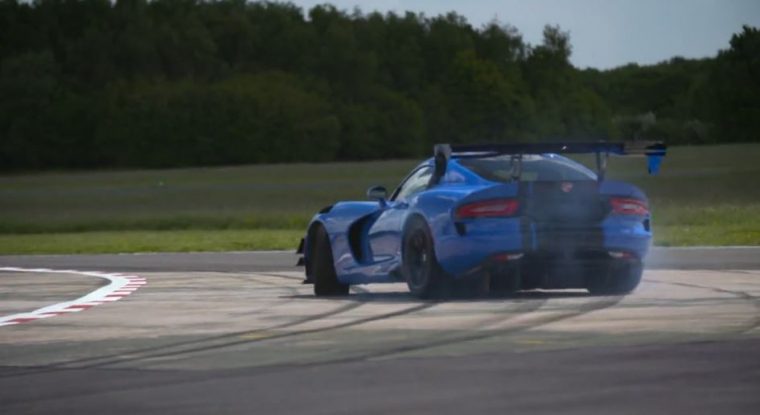 The Dodge Viper might be on its way out of the Dodge lineup, but it’s made one more person fall in love with it before it goes. In a recent video posted on TopGear.com, Chris Harris—one of the many hosts of the revamped Top Gear car show—got behind the wheel of the iconic American Dodge Viper ACR and was seriously impressed with its performance.

The End of an Icon: Find out more information about the demise of the Dodge Viper

Now, it’s no secret that the Viper ACR is one of the most lethal street cars in the industry. In fact, it’s the fastest street-legal car available—beating out the Corvette Z06 with ease. With an 8.4-liter V10 engine, this supercar pumps out 645 horsepower and 600 lb-ft of torque and Harris just can’t get enough.

While behind the wheel of the ACR, Harris’s excitement grows and grows as the video rolls. At first, he’s merely excited about the amount of downforce the ACR’s aerodynamics package creates. The package includes basically everything you could want and more, including a huge rear wing that looks like it’s been taken off a race car to a front splitter that will leave a lasting impression. Needless to say, it helps the track-ready Viper reach a top speed of 177 mph. Add its six-speed manual transmission, and it’s obvious that Harris is in love.

Dodge on Ice: Watch the Dodge Challenger Hellcat take on an icy track

“It’s hard to think of anything more American than a Dodge Viper ACR,” he states in the video. “Well… Donald Trump naked in a Corvette… No, I don’t want to think about that.”

Horrifying imagery aside, Harris couldn’t be more accurate about the iconic Viper. Currently, this supercar is hand-built in Fiat Chrysler’s Conner Avenue plant in Detroit. Created to give consumers pure power, it’s easy to see why Harris calls the Viper ACR “one of the most surprising cars [he’s] driven in ages.”

Check out Chris Harris taking on the track in a Dodge Viper on Top Gear’s website here.