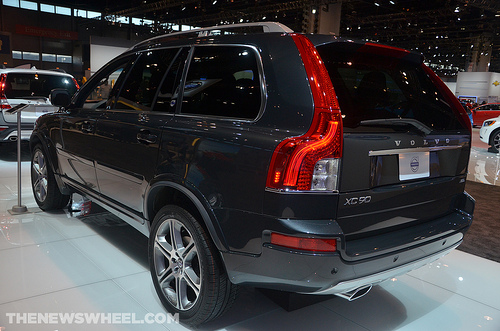 This week, Volvo is sure to wow the assembled masses at the 2014 Geneva Auto Show with the world premiere of the Volvo Concept Estate shooting brake, which is likely to steal a fair amount of attention for the Swedish automaker. Not to be ignored, however, is Volvo’s new touchscreen technology that will feature at the heart of the Concept Estate’s center console.

“The basic idea is to organize controls and information in a perfectly intuitive and user-friendly way. Everything is exactly where you expect it to be, making the drive more enjoyable, efficient, and safe,” says Thomas Ingenlath, Senior Vice President Design at Volvo Cars, in a press release.

Volvo’s new touchscreen will take the place of standard console knobs and buttons entirely, resulting in a smooth center stack that lets drivers control important aspects of their rides with as little as a flick or a swipe, a pinch or a poke.

While we can’t guarantee that the lovely, lovely Concept Estate will be brought to production (though we suspect it will heavily influence next generation Volvo wagons), we do know that Volvo’s new touchscreen will feature in the next generation of XC90, scheduled to release later this year.

The touchscreen interface will allow for ultimate control of music and climate control, and it can also interact with the digital information cluster. A stack of four flexible tiles—each displaying key functions such as media, navigation, and phone—is anchored by a notification band and digital climate controls.

We don’t know about you, but we certainly think an interface such as Volvo’s new touchscreen would grow on us with the quickness. How about you? Are you an old school button and knobber, or do you embrace new technologies with open arms and swiping fingers?