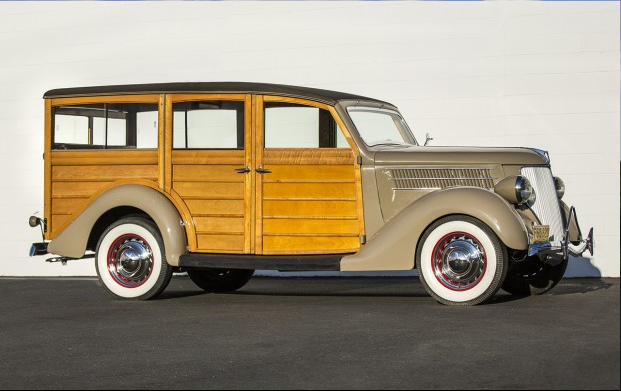 At today’s Gooding & Company at Pebble Beach, the assembled masses will be able to indulge in wave after wave of beautiful, elegant cars rescued from history. We’re talking cream of the crop: from Ferraris and Porsches of all kinds to the gorgeous 1955 Aston Martin DB3S and the sleek 1995 McLaren F1. We wanted to take a look at something apart from the sports cars and the roadsters, focusing instead on something that is beautiful and elegant in its own, entirely unique way: the 1936 Ford Deluxe Station Wagon.

Lot Number 27 is a 1936 Woodie Wagon equipped with an 85-horsepower, 221 cubic-inch L-head V8 mated to a three-speed sliding-gear manual transmission. It has four-wheel hydraulically-actuated drum brakes, a solid front axle with transverse leaf spring, and a live rear axle with transverse leaf spring. It’s an altogether weird-looking creature, but something in its wood-panel construction resonates with a part of you that loves old James Cagney movies and has always wanted to run bootleg liquor across the border.

Ford sold 7,044 Woodie Station Wagons in 1936, and though this means it’s not particularly rare, this particular 1936 Ford Deluxe Station Wagon is in exemplary shake. It’s expected that this model will fetch between $80,000 and $100,000 when it crosses the auction block today with no reserve.

We’ll keep an eye on this and all other classics being sold throughout the day, so stay tuned!