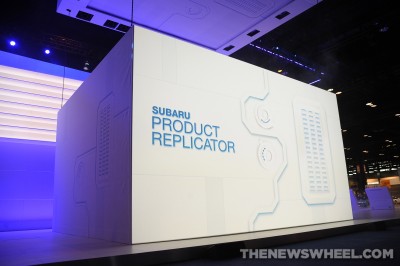 What’s in the box? WHAT’S IN THE BOX?

This morning at the 2014 Chicago Auto Show (CAS), Subaru President and COO Tom Doll stood before the assembled media and discussed the legacy of…well…the Legacy. He talked at length about Subaru’s five years of success and its recent auto show reveal victories (particularly the WRX and the WRX STI) before turning his focus to the sedan segment and the 2015 incarnation of the Subaru Legacy. 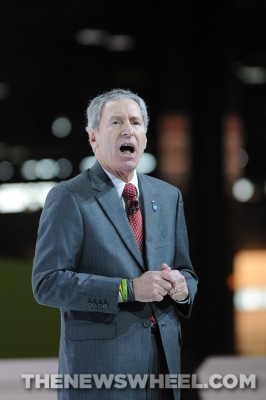 The setting was extravagant to say the least: the stage was done up to resemble an enormous 3D printing device. Before the big reveal, lights flashed and dry ice smoke poured out over the floor. Some booming techno accompanied images of the 2015 Legacy being constructed from sand were projected upon the side of the box that housed the vehicle. Slowly, it was lifted into the air, tension mounting, music growing louder, only to reveal… 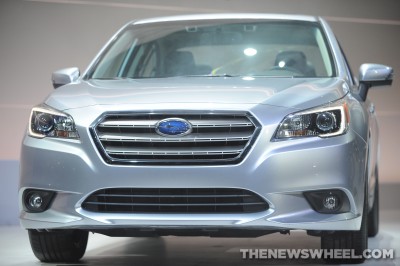 Yep. The 2015 Subaru Legacy is a sedan. It is a sedan with a Subaru badge on it.

Now, don’t get me wrong. We here at The News Wheel think that Subaru makes some pretty wonderful cars (we’re looking at you, BRZ) even if they look pretty dull at times (we’re looking at you reluctantly, WRX). The 2015 Subaru Legacy claims the largest passenger cabin in the midsize segment and class-topping fuel efficiency for all-wheel-drive sedans. It boasts standard Active Torque Vectoring for greater agility, as well as a number of safety and infotainment enhancements.

These are all great things. The lack of a manual transmission to truly draw the most out of either a 4-cylinder or 6-cylinder BOXER engine, however, is the opposite of a great thing.

And even at that, it all looks…somewhat dull.  The design language is inspired by the Legacy Concept that premiered at the LA Auto show last year, with a “nosecone” front section, heavily raked windshield, and aerodynamic elements that promise better fuel efficiency and performance. It’s definitely not an affront to cars, and it’s not hideous by any stretch, but it won’t do itself any favors by being so plain.

Still, I can’t help but find a bit underwhelmed by the 2015 Subaru Legacy itself, regardless of how thrilling the reveal process may have been. Subaru is more than welcome to change my mind when we get a closer look as CAS wears on.

Let us know what you think: will the 2015 Subaru Legacy make good on Tom Doll’s claim of being “the more interesting purchase in what can be a pretty vanilla segment,” or is it just another extract?