The 2016 Toyota RAV4 enters the crowded small crossover segment alongside a number of all-new competitors. Despite being in its fourth generation, the RAV4 still offers plenty of standard and optional features to get drivers excited, and the 2016 model year includes some thrilling new features to ensure the crossover doesn’t fall into a design rut. 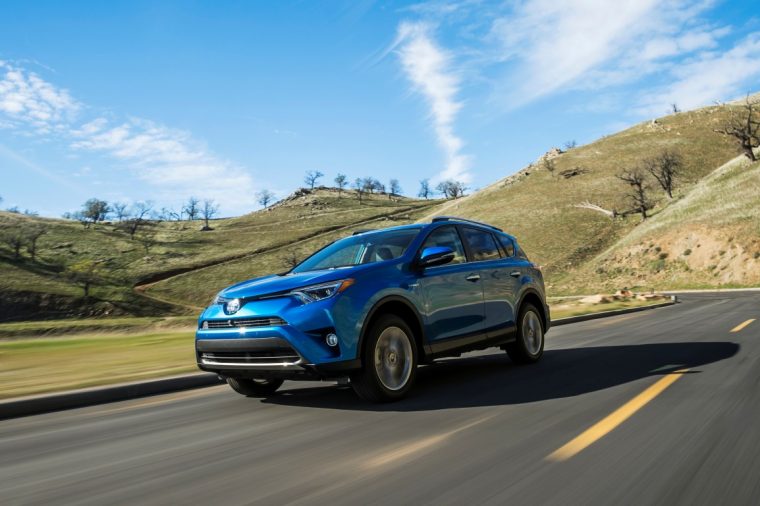 The Toyota RAV4 entered its fourth generation in 2013. For 2016, the lineup has been revitalized by the introduction of three new models—the gasoline-powered SE and hybrid versions of the XLE and Limited trims. The new RAV4 Hybrid is the eighth hybrid vehicle in Toyota’s lineup, and joins the Prius, Prius v, Prius c, Prius Plug-In, Avalon Hybrid, Camry Hybrid, and Highlander Hybrid.

The 2016 Toyota RAV4 comes in six available trim levels, including LE, XLE, XLE Hybrid, SE, Limited, and Limited Hybrid. The hybrid models have all-wheel-drive systems, while the gasoline models are available with either FWD or AWD. 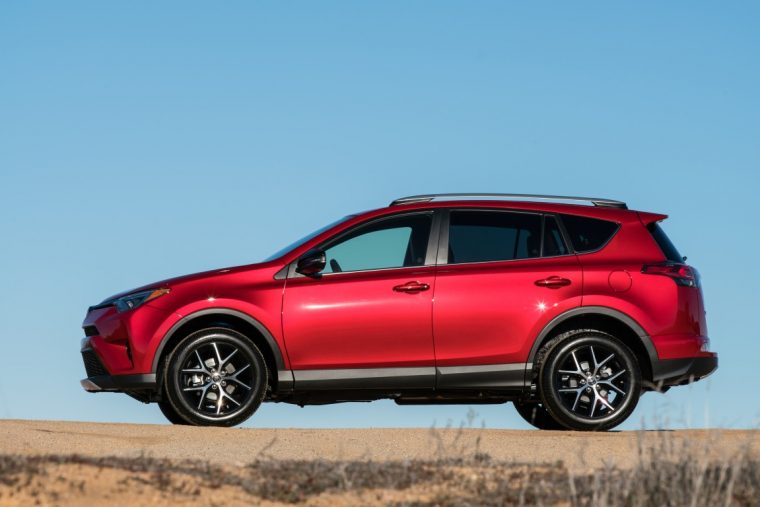 The 2016 Toyota RAV4 has kept much of its exterior styling from the previous model year, including its signature roof rails and boxy shape. A redesigned grille adorns the front of the crossover, highlighted by wrapped back headlight units on either side. The RAV4 also has a refreshed rear bumper, though the difference isn’t too visible.

Toyota offers 14 color choices for the 2016 RAV4, including the eye-catching Electric Storm Blue, and more traditional hues such as Black, Super White, and Classic Silver Metallic. 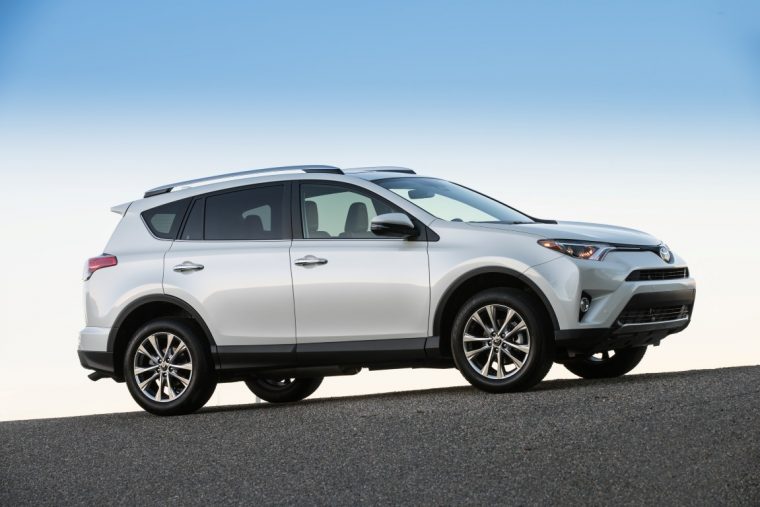 All gasoline models in the 2016 RAV4 lineup are powered by a 2.5-liter four-cylinder motor that’s good for 176 horsepower and 172 lb-ft of torque. This engine is paired to a six-speed automatic transmission that sends power to either the front wheels (with FWD) or all four wheels (with AWD).

The XLE Hybrid and Limited Hybrid models come with hybrid versions of the RAV4’s 2.5-liter engine. This motor has a combined horsepower rating of 194, making it more powerful than the gas-only version. This engine is mated to a continuously variable transmission. 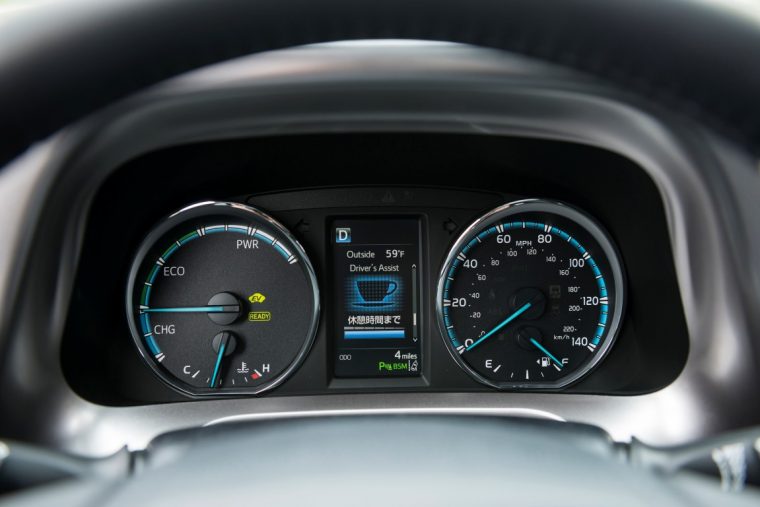 For a compact to mid-size crossover, the 2016 Toyota RAV4 has fairly impressive fuel efficiency ratings, especially if you choose a hybrid model. The 2.5-liter gasoline engine produces 23/30/26 mpg city/highway/combined with FWD, and 22/29/25 mpg city/highway/combined with AWD. This puts it slightly lower than the competition, but still not too shabby.

The hybrid models are another story entirely. Both models offer 34/31/33 mpg city/highway/combined, making them some of the most efficient crossovers on the market. 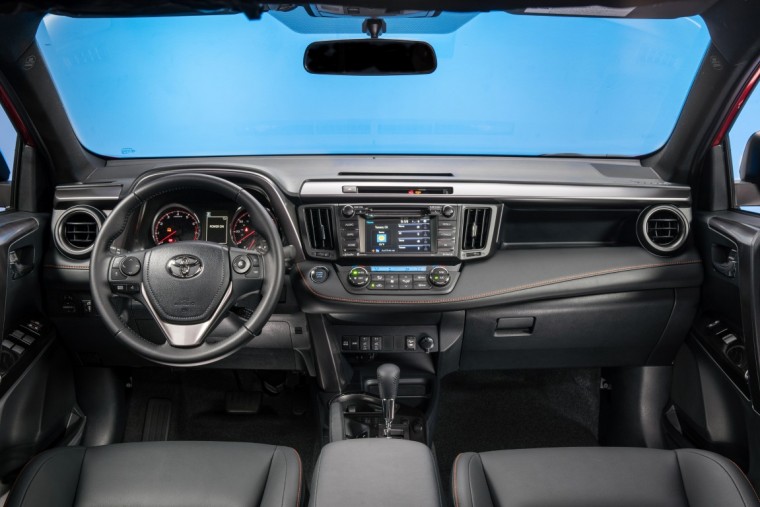 Toyota has tried to make the most out of the 2016 RAV4’s available storage space, with more compartments than ever before. Depending on the model, you can choose between cloth and leatherette upholstery, and higher trim levels offer two-tone designs that give the RAV4 a premium feel.

All models get some form of Toyota’s Entune infotainment system, from the most basic version (which includes Bluetooth and a backup camera) to the tricked-out version with navigation and Entune App Suite. From the LE to the Limited, you’ll be entertained no matter how long the journey. 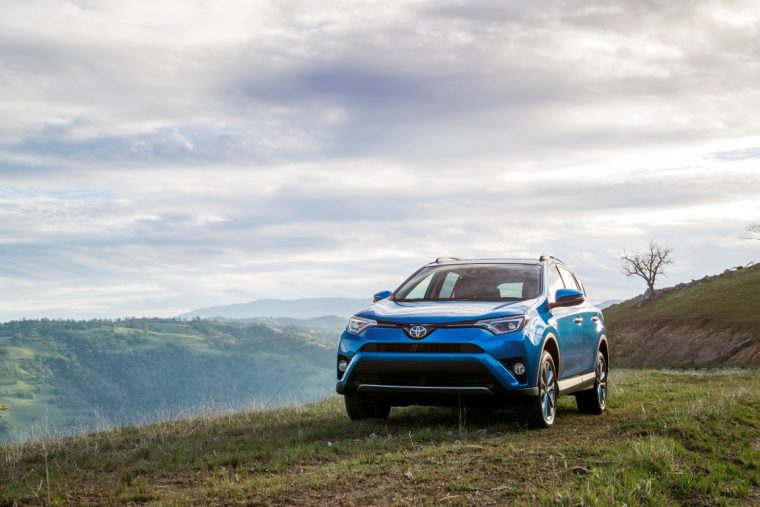 One of the most exciting things about the 2016 RAV4 is the availability of Toyota’s new Safety Sense P package, which offers forward collision warning, automatic emergency braking, lane departure warning, and automatic high-beam headlight control. Aside from that, the RAV4 was named a Top Safety Pick+ by the Insurance Institute for Highway Safety (IIHS), and received five stars in crash testing performed by the National Highway Traffic Safety Administration (NHTSA).