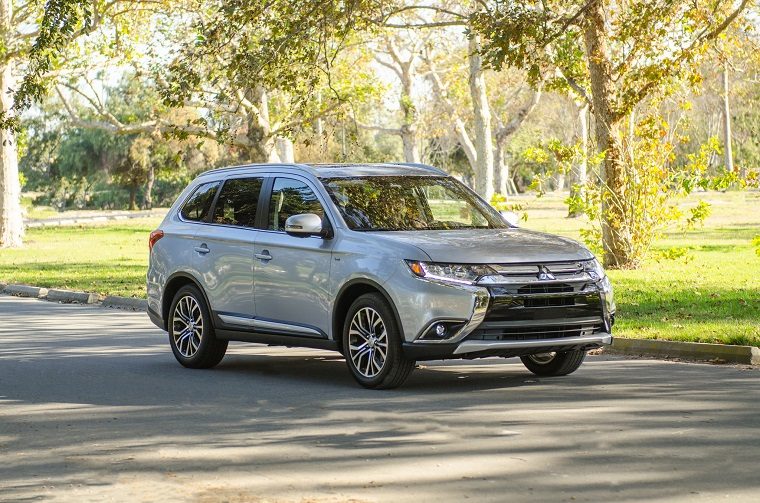 The 2017 Mitsubishi Outlander is a seven-passenger SUV with proven off-road credentials, a cabin full of useful features, and a peace-of-mind-inducing 10-year/100,000-mile powertrain warranty that matches Kia‘s for the best in the industry. Despite being one of the least known of the SUVs in its class compared to the Honda CR-V or the Nissan Rogue, it remains one of the most competent and, importantly, also one of the most affordable. So if you’re looking for an SUV that will comfortably accommodate seven people and all of their stuff and fit in your budget, it’s hard to go wrong with the Mitsubishi Outlander. 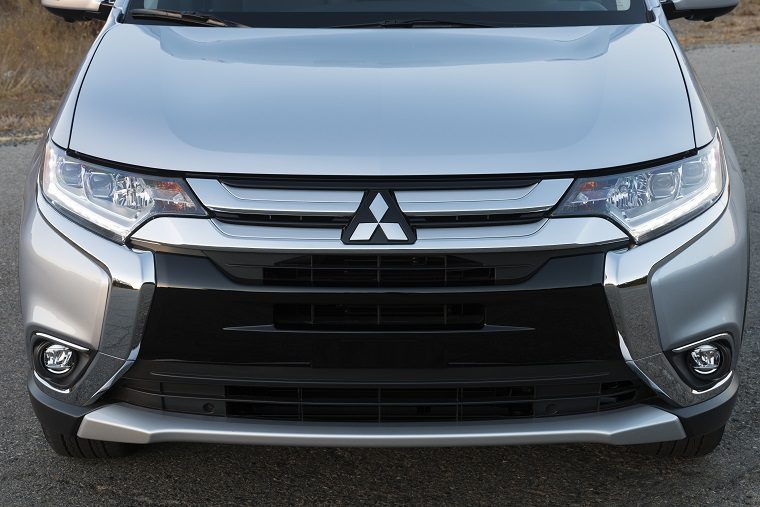 What’s New for the 2017 Mitsubishi Outlander?

For the 2017 model year, the Mitsubishi Outlander gets the previously-optional rearview camera and 6.1-inch touchscreen as standard equipment across the lineup as well as new optional features like a heated steering wheel, Apple CarPlay and Android Auto, automatic high beams, and a 360-degree camera system. Also new for 2017 is a simplified AWD system on the ES trim, which was previously only offered with FWD. 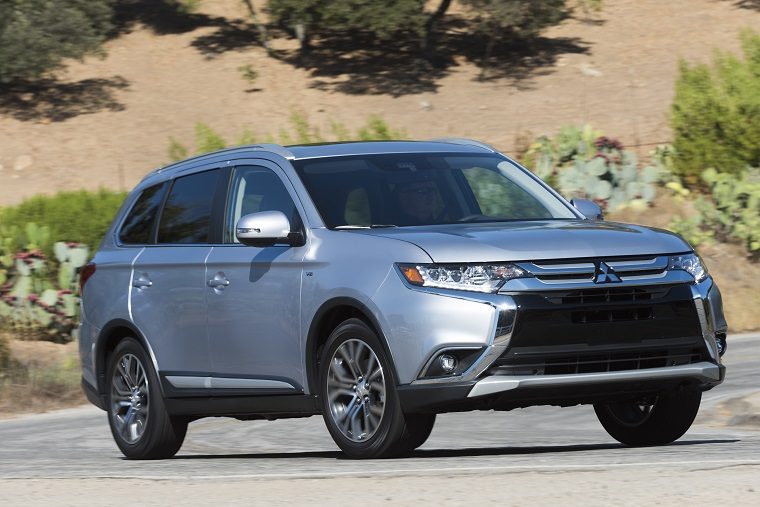 Not much about the Mitsubishi Outlander’s exterior has changed for 2017, as the 2016 model year’s makeover carries over with its aggressive nose and rear look, highlighted by Mitsubishi‘s new signature “Dynamic Shield” grille that definitely makes the SUV stand out among the competition, for better or worse depending on your tastes. On the other hand, there’s plenty to unanimously love about some of the exterior features, like the windshield-wiper de-icer that makes trudging through cold, snowy mornings that much easier, or the power-folding side mirrors that make the Mitsubishi Outlander feel more upscale than its price tag would suggest.

Exterior available on SE (adds to or replaces features on ES):

Exterior available on SEL (adds to or replaces features on SE):

Exterior available on GT 3.0 S-AWC (adds to or replaces features on SEL): 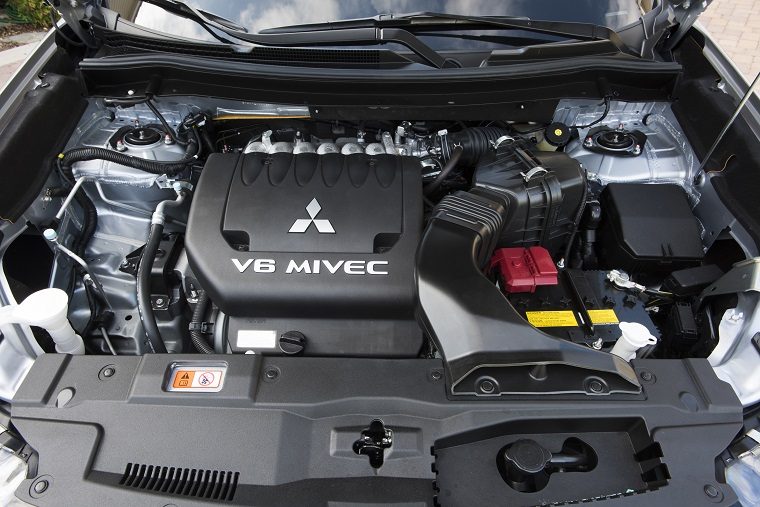 All 2017 Mitsubishi Outlander models but the GT are powered by a 2.4-liter inline four-cylinder engine that makes 166 horsepower and 162 lb-ft of torque. The four-cylinder is mated to a continuously variable automatic transmission (CVT), runs on regular unleaded gas, and has a towing capacity of 1,500 pounds. Power is sent to the front wheels by default and optionally to all four wheels via Mitsubishi’s All Wheel Control (AWC) technology. The base ES trim gets regular AWC while the SE and SEL get Super-All Wheel Control (S-AWC).

The 2017 Mitsubishi Outlander GT is offered only with S-AWC and is powered by a 3.0-liter V6 that makes 224 horsepower and 215 lb-ft of torque. It is mated to a six-speed automatic, uses premium gasoline, and has a towing capacity of up to 3,500 pounds. 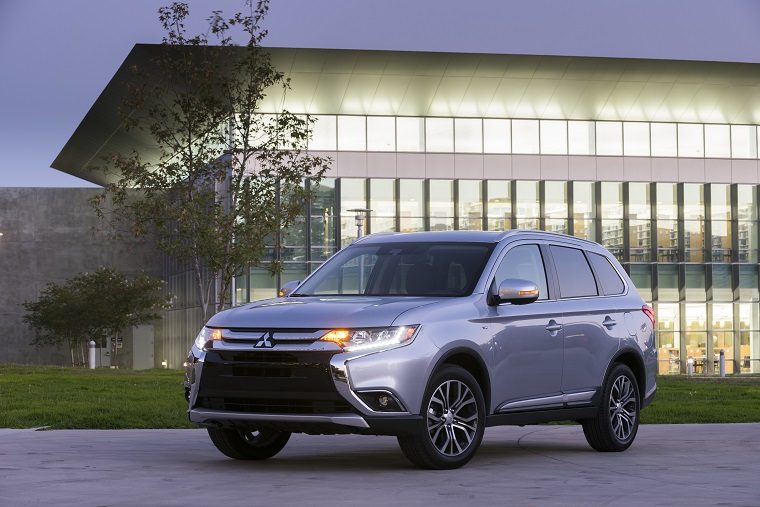 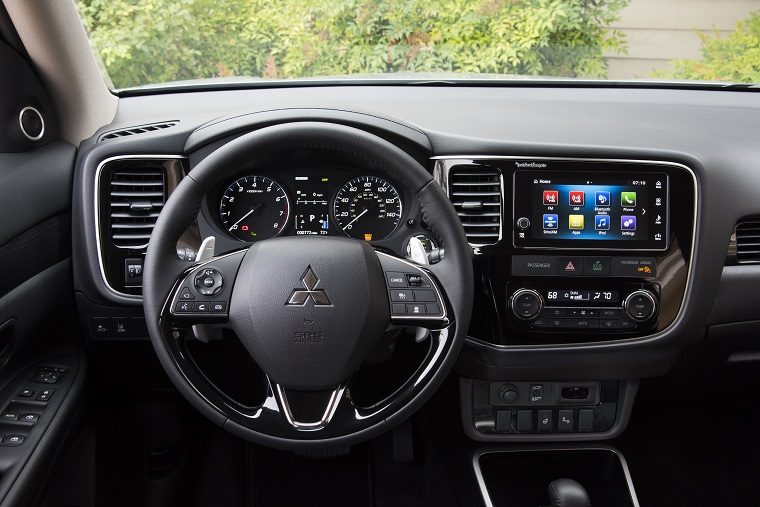 Comfort is clearly a major focus of the 2017 Mitsubishi Outlander, which features a nicely-designed and attractively-finished interior with easy-to-use controls, comfy seats, and tasteful accents and quality materials you would expect in more premium vehicles. There’s 63 cubic feet of cargo space in the rear if you fold down the second and third row, which is easy to do thanks to a convenient system of straps and levers. There are also lots of features even at the lowest trim level, including a 6.1-inch touchscreen display with an integrated rearview camera. Spending a little extra to unlock the higher trims gets you luxury features like a Rockford-Fosgate® premium sound system and heated leather seats at great value.

Interior available on SE (adds to or replaces features on ES):

Interior available on SEL (adds to or replaces features on SE):

Interior available on GT 3.0 S-AWC (adds to or replaces features on SEL): 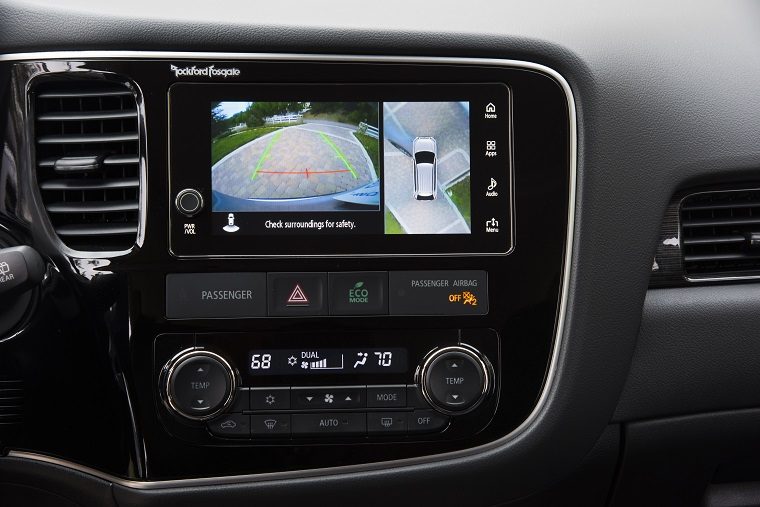