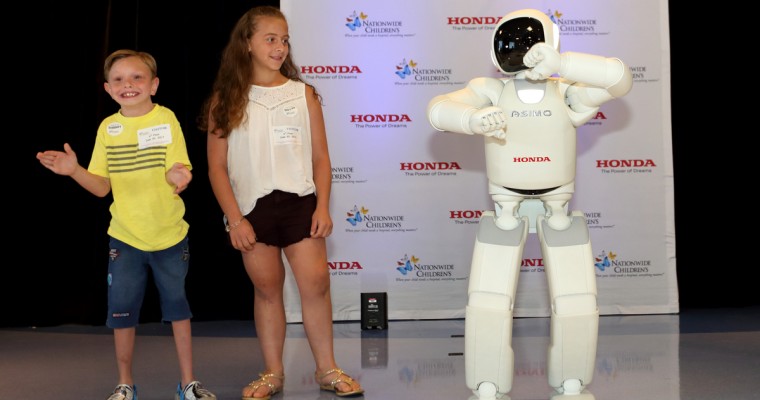 After recently announcing a generous $1 million dollar donation to the Nationwide Children’s Hospital in Columbus, Ohio, Honda said today that it will donate an additional $1 to the hospital for every “Like” or “Share” that social media users give to this new video of young hospital patients interacting with the Japanese automaker’s ASIMO robot. […] 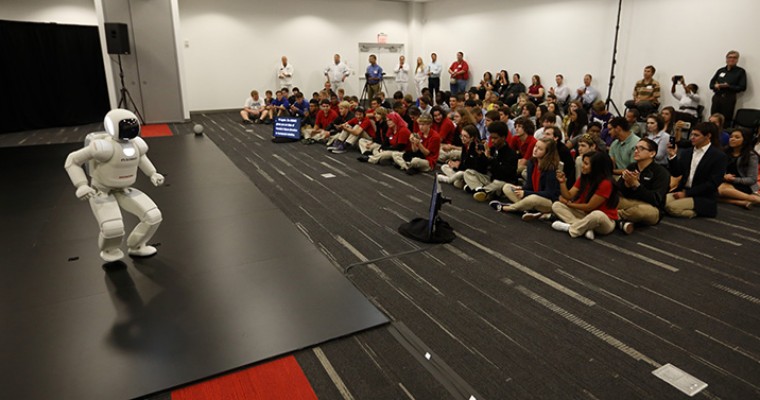 Many parents of elementary school students can take pride in their child’s academic or extracurricular successes, but how many can claim that their offspring wrote an essay so good that it merited a special visit from an advanced humanoid robot? As far as we’re aware, just the parents of Samantha Shestack, a fourth-grader whose essay […] 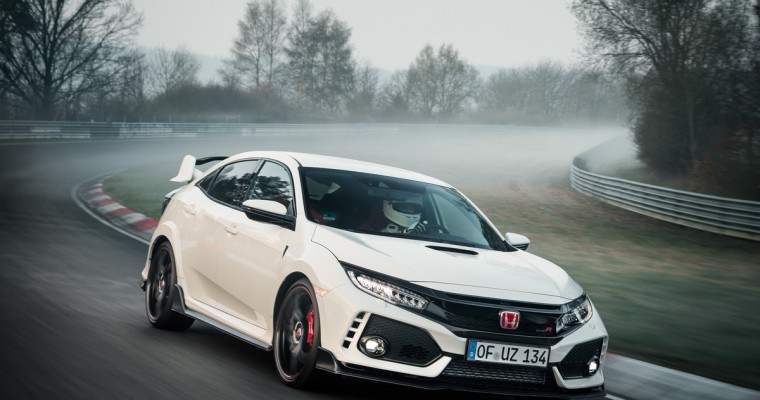 The Honda ASIMO humanoid robot was greeted as a rock star by a group of middle school students who had come to the Honda Silicon Valley Lab in California for a special demonstration. Though ASIMO is eventually meant to serve as a sort of butler for humans, at the moment he is best at wowing […]

Hey Teens, Enter to Win a Visit to Your School from the Honda ASIMO Robot

Hey, middle- and high-school students ages 13 to 18—have you ever wanted to meet Honda ASIMO, the world’s most advanced humanoid robot, and the inspiration for Cartman’s “AWESOM-O” robot? (Teenagers still watch South Park, right?) Well, here’s your chance. Honda is holding a contest for teenaged students, asking them to share their answer to the […] 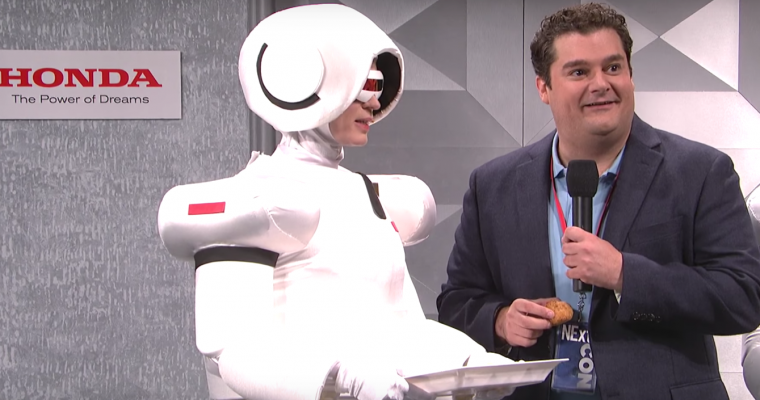 Emily Blunt hosted Saturday Night Live this past weekend, to middling results. Blunt, who was there promoting her new film The Girl on the Train, was a game and talented host, but the episode itself was largely forgettable. The most memorable moments came in the opening sketch, a parody of last weekend’s presidential debate between […]

The groundwork continues to be laid for the inevitable robotic uprising, in which humans will find themselves subjugated and ruled by machines with Artificial Intelligence. First the humanoid Honda ASIMO seized control of major cities, then he met with the world leaders he intends to overthrow, and now he has begun influencing the hearts and […] 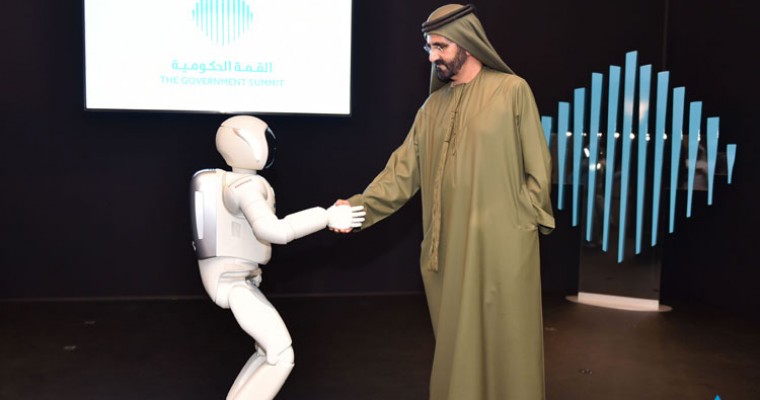 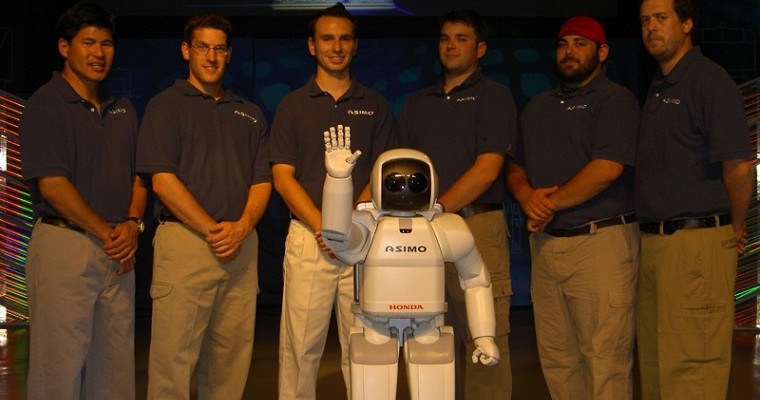 Honda’s ASIMO is likely the world’s most famous robot. Originally unveiled in 2000 after more than a decade of development, it was the first robot to walk on two legs. It can also interpret voice commands and human gestures, determine the distance and direction of multiple moving objects, and autonomously navigate using sensors. Unfortunately, if […] 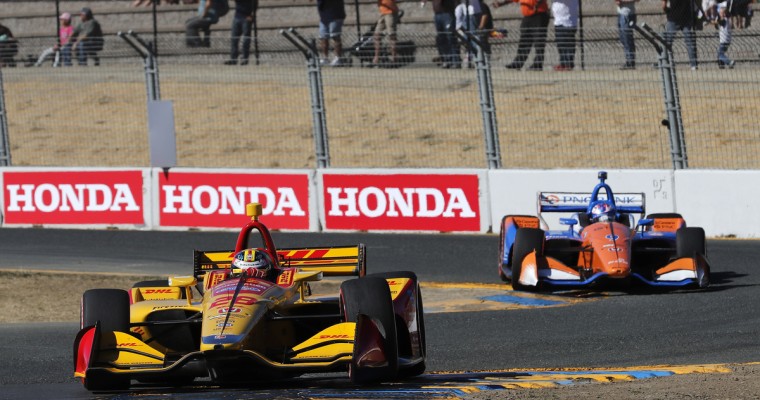 Honda claimed victory over both the 2018 Verizon IndyCar Series drivers and constructors championship at the IndyCar Grand Prix of Sonoma this weekend. Honda driver Ryan Hunter-Reay led 80 of the 85 laps and comfortably won the race, but it was Scott Dixon who went home with the big trophy. Having arrived at the final […] 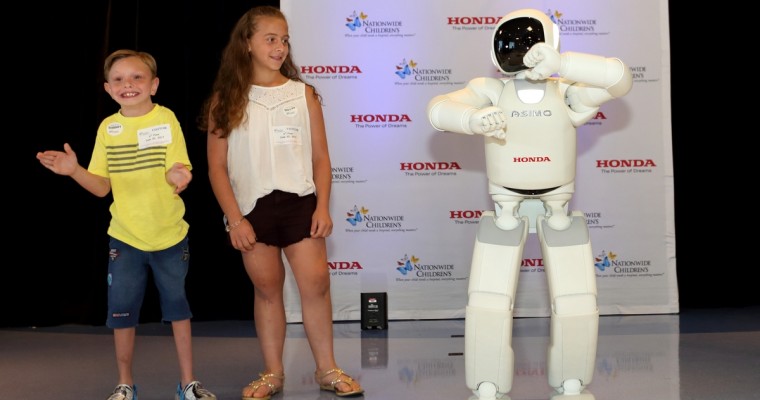 Today Honda announced the donation of a $1 million gift to the Nationwide Children’s Hospital in Columbus, Ohio, pledged with the purpose of establishing the Honda Center for Gait Analysis and Mobility Enhancement, which is meant to improve pediatric mobility. The announcement took place at Nationwide Children’s Hospital during a recognition event featuring representatives of […] 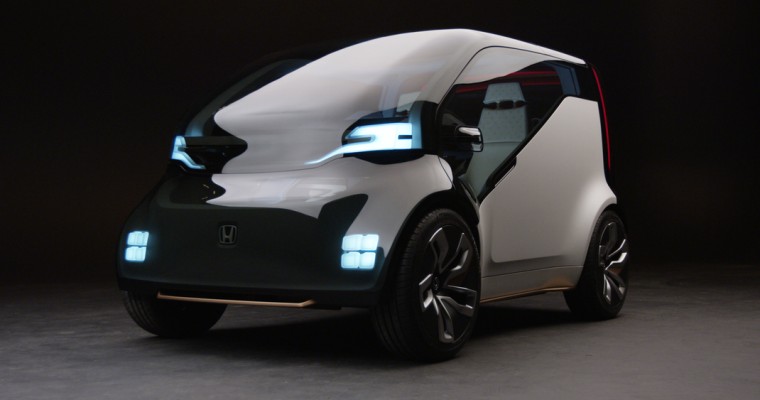 Today at the Consumer Electronics Show in Las Vegas, Honda introduced a very sci-fi looking mini-vehicle dubbed the NeuV (pronounced “new-v”), or “New Electric Urban Vehicle.” The autonomous concept car is based on the fact that most people’s cars sit idle 96% of the time. The NeuV would eliminate that inefficiency and provide customers with […] 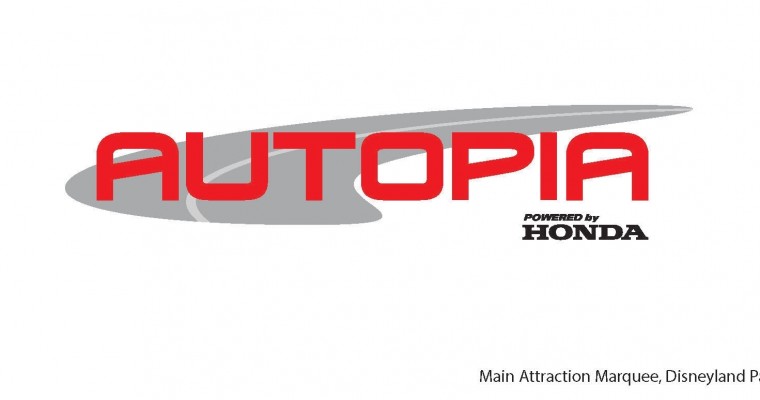 Added on January 28, 2016  The News Wheel  Honda , Honda ASIMO , Honda Robotics , Walking Assist Device , What Makes a Honda is Who Makes a Honda 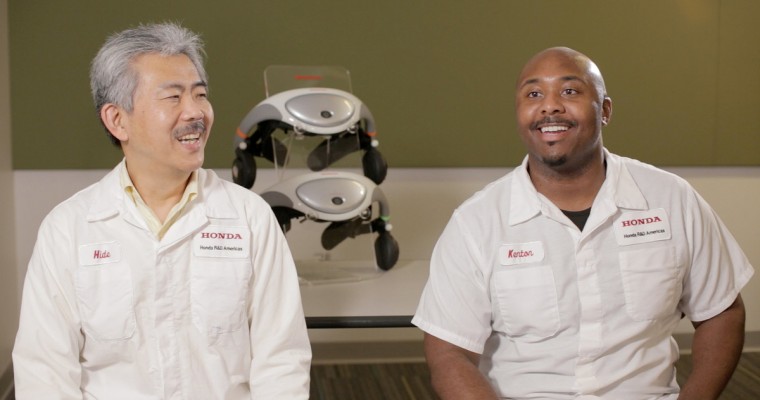 Honda has released another installment of its 12-part “What Makes a Honda is Who Makes a Honda” video series, which highlight the various personalities behind the company, from aerospace engineers to customer service managers. This time, instead of profiling just one person, Honda has chosen to highlight a pair of engineers, whose teamwork is helping […] 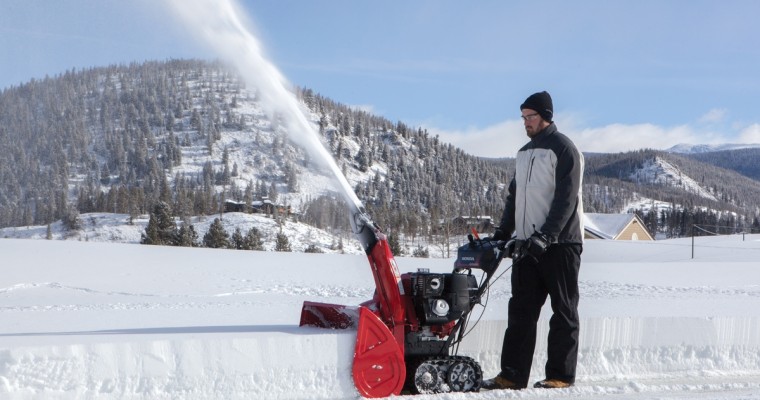 Honda recently celebrated the “Year of Honda” with an eye-popping commercial that showcases the many innovative new Honda products launching in 2015, from the Civic Type R to the HondaJet. The vehicles are arranged in the shape of a rocket ship, and led by the Japanese automaker’s ASIMO robot. Well, here’s one brand-new Honda product […] 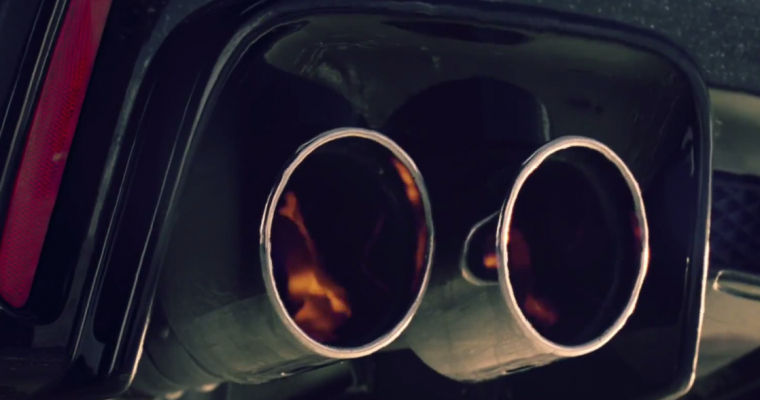 Honda wasn’t kidding around when it called 2015 the “Year of Honda” back in January at the North American International Auto Show in Detroit. The Japanese automaker just celebrated its biggest year of product launches with the release of a new video entitled “Honda Ignition,” which takes the brand’s latest vehicles (including the two-wheeled and […]

Last week, the federal government found that American Honda Financial Corporation had violated fair lending laws by routinely charging minority customers $150 to $250 more for loans than their white counterparts. As a result, the automaker will be sending $24 million in rebate checks to the thousands of black, Hispanic, Asian, and Pacific Islander borrowers who […] 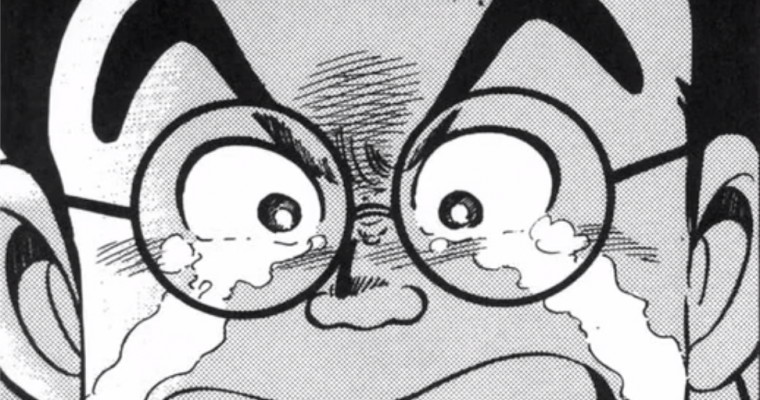 As a Japanese car manufacturer, Honda Motor Company has one distinct advantage over its American and European competitors: the automaker knows how to make a good manga. “Honda Origins – The Manga” is a new animated manga video series based on the comic “Honda Soichiro Hon-Den,” published by shogakukan Inc. Honda just posted Volume 1 […]

Here, We Translated these Papercraft ASIMO Instructions for You 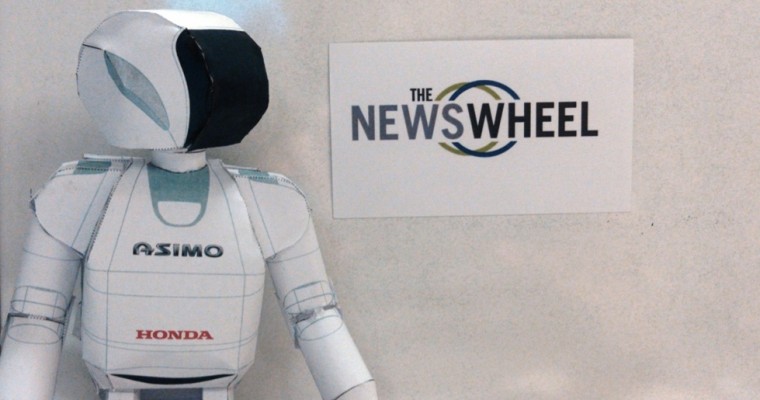 We turned the Japanese into English so you can construct an ASIMO with the best of 'em.

Have you ever wanted to build your own robot, but didn’t really want to bother with all that engineering degree nonsense? We can’t all be experts at advanced electronics, so Honda came up with a printable ASIMO toy to make us feel like real-live robotics specialists. Right now, there are full instructions on assembling your […]