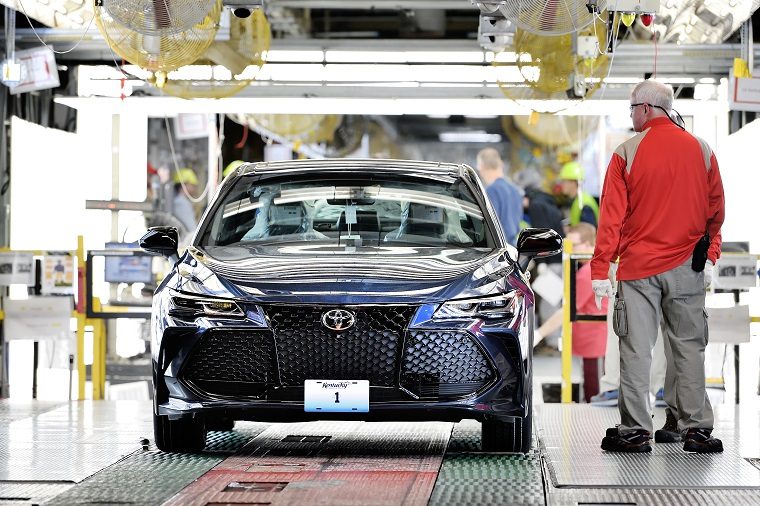 The all-new 2019 Toyota Avalon, which was unveiled earlier this year at the North American International Auto Show in Detroit, is finally rolling off the assembly line at the company’s Kentucky plant.

Even as Ford kills its entire car lineup, the Avalon represents Toyota’s commitment to the full-size sedan, regardless of whether the segment is currently doing well. Given the pressing need to reduce emissions and the income rise in gas prices, many will be glad that automakers like Toyota are continuing to produce vehicles like the Avalon.

With a starting MSRP of $35,500 for the base XLE V6 trim, the Avalon falls firmly into “mid-premium” territory. Though not quite as luxurious as a $70,000 Cadillac or Range Rover, the Avalon blends top-rate materials and advanced technologies one truly sophisticated package.

The car also features quite a few Toyota firsts, such as adaptive variable suspension and two new powertrains, including a V6 and a hybrid. What’s more, it comes with an “Engine Sound Enhancement” button that you can literally press to make your engine sound like a sports cars, and owners of iPhone devices will be glad to learn the Avalon finally comes with standard Apple CarPlay.

What Toyota is proudest of, in typical Toyota fashion, is the manufacturing process supporting the car. It’s the first Avalon to be built using the company’s new global architecture manufacturing platform, which has led to major improvements in production line flexibility, creativity, and quality control.

“It’s a badge of honor, working on this vehicle,” said Karen Cooper, the quality engineering manager and Avalon project lead at Toyota Motor Manufacturing Kentucky. “It’s a three-year process—our role was taking the design and ensuring it is manufacturable. We bridge between what the customer wants and how to produce that on the plant floor. The attention to detail, including the premium fit-and-finish of the new Avalon will make the customer proud to drive it.”