Bumping Along With the AC Blasting: A First-Timer’s Look at Driving in Mexico

It was incredibly hot at the Cancun, Mexico airport, as the mid-day sun turned every paved area into a skillet and tested the resolve of every air conditioning unit. Red-faced tourists stood in a long line up to a shoulder-high counter, behind which stood a team of blank-faced employees methodically working their ways through both car-rental options and time-share sales pitches with the steady determination usually seen in DMV employees in the US. One family’s child was very unhappy about the long delay—she rocked forward in the car seat she was sitting in until it sat upright on the floor, then cried until her mother came to rock the chair back to near-horizontal. This repeated a few times.

I was travelling with my fiancée’s family, and had been relegated to standing guard over the luggage. So, after a few hours of standing on my ergonomic-chair-weakened legs while only fitfully enjoying a slight movement of air from the failing AC unit high up on the wall beside me, I was ecstatic to hear that we had a car: a delightful little South-America-exclusive Volkswagen hatchback called a Gol. 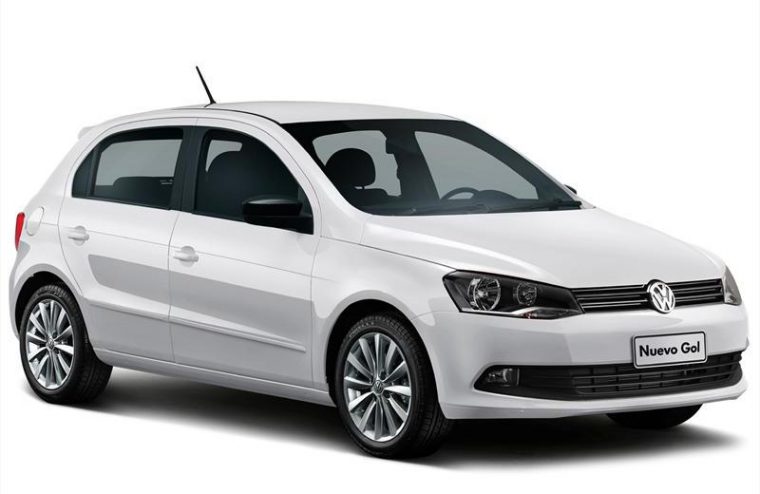 The Gol (not a typo) itself was about what you expect from a rental car—it had four doors, a rear hatch, and not much else. The interior was minimalist, to say the least—the upper parts of the door are not, as in most cars in the US, sheathed in plastic, but instead were the bare metal of the door itself, painted white. 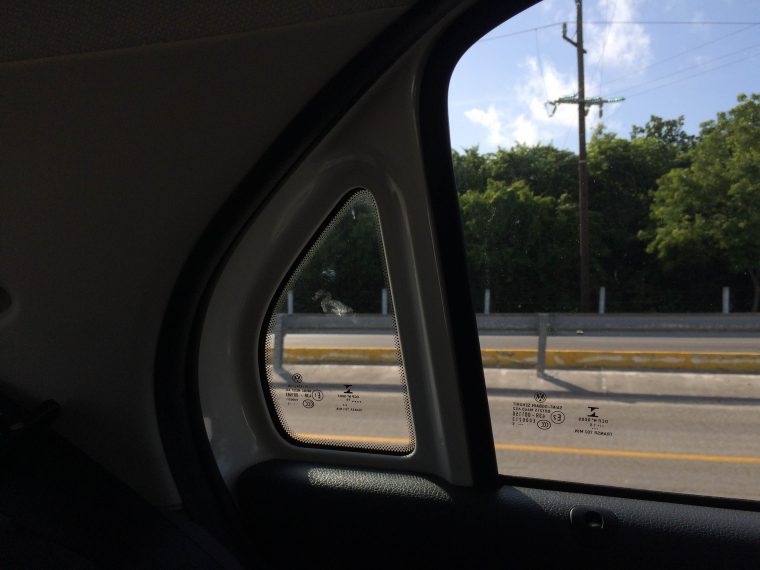 In addition, we were denied the luxury of power windows, so were treated to crank windows, which I had last encountered in by great aunt’s old Buick Skylark from the ‘80s. 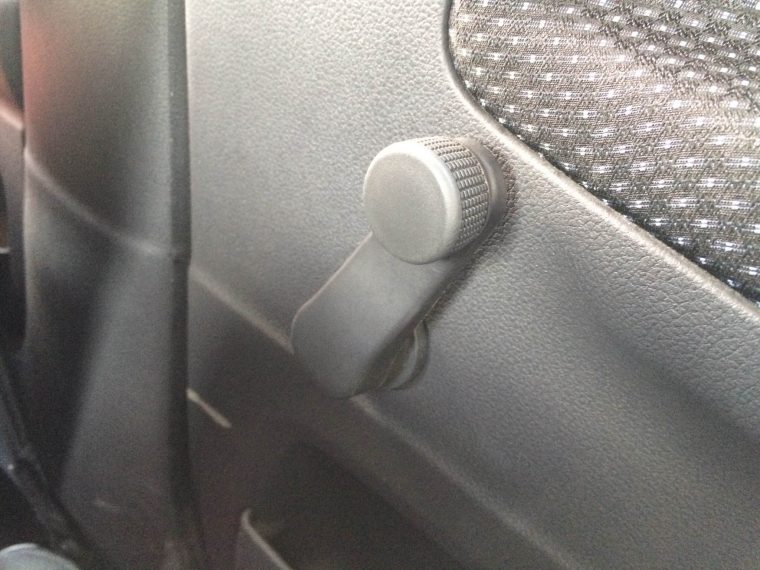 A feature and a memory all in one

Legroom was at a premium even before I got in, and once I folded myself into the back seat the window crank dug industriously into the side of my knee at every jostle. However, the Gol did have one feature absolutely crucial to driving in Mexico: air conditioning. 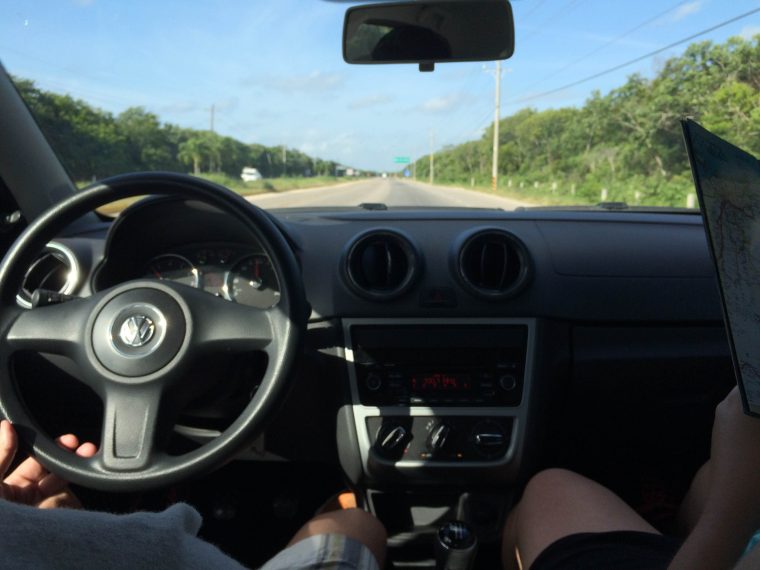 As I was not the one to rent the car, I was not allowed to drive it, but according to reports, the mighty engine felt as if it pulled with all the thunderous fury of, like, a couple horses tied to the front. To be fair, according to VW, the Gol comes with a 1.6-liter four-cylinder that makes 101 horsepower, and the poor little thing was tasked with dragging our heavy butts around.

As we got in, I briefly wondered why the rear shocks creaked like a clipper in a gale, but the explanation was soon to come.

Time for Good Idea, Bad Idea: Should I be driving right now?

Even while not in the driver’s seat, driving in Mexico was odd, to say the least. Speed limit signs went by every couple hundred meters displaying the maximum at anywhere between 70 and 100 kph, but as we endeavored to drive the speed limit, we were whipped past by approximately everything on the road that had attached a motor to four wheels. 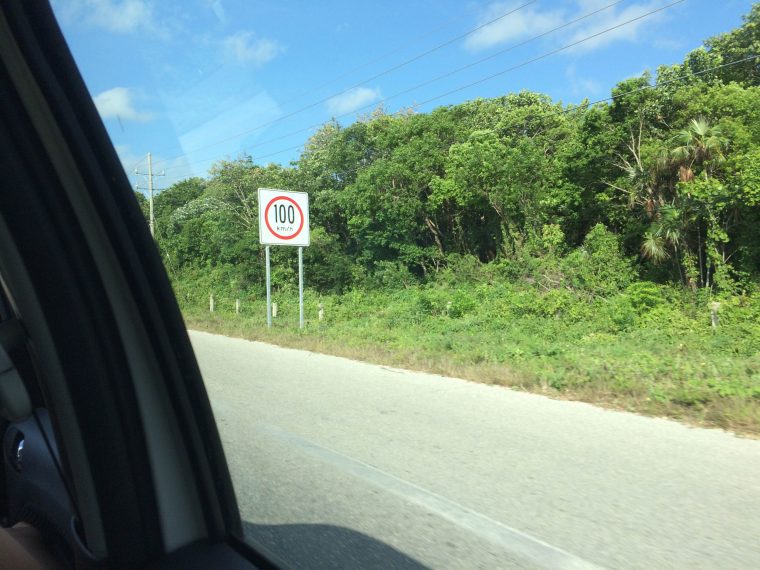 Turn signals were another thing that didn’t really seem to matter, at least on the main road, as drivers just drifted among the lanes without preamble, and often without what we often refer to as “adequate space.” Travel sites often talk at length about Mexican police and their stringent adherence to the speed limit, but almost all of the police that we saw were in checkpoints, out of which they watched the traffic go past.

Of course, there were things limiting your speed—specifically, enormous speed bumps. 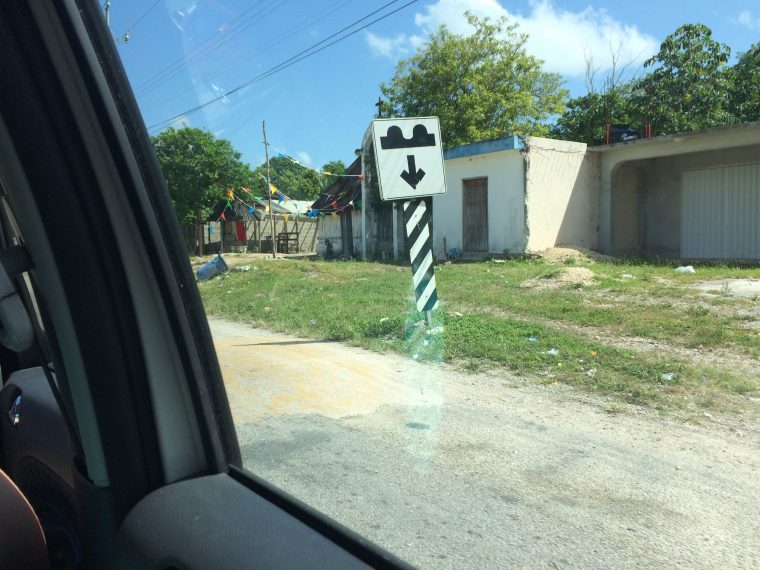 Warning: Foul languages in use

Mexican traffic authorities really weren’t messing around with these. There were two general types—the first type was approximately twice the size of a normal US speed bump, and caused the poor little Gol to fight its way up before dropping us down the other side. The other type seems to be large, metal domes sticking up from the pavement, seemingly meant less for tossing your car in the air if you are going too fast and more for attempting to batter you to death using your own vehicle as the weapon. We quickly devised a system of the person in the passenger seat calling out a warning of approaching bumps, but there were still a number of sudden bumps that filled the drive with ample opportunity to test out those shiny new Spanish swear words I was learning and to explain the poor condition of the car’s shocks.

There was an exception to these problems, which came up when we decided to check out the nearby Mayan ruins of Muyil, which were in a significantly less-developed area than Playa Del Carmen. After we passed through Tulum, the route changed from a four-lane divided road to a two-lane highway with wide shoulders, where speed disputes were solved by the simple method of the slower car pulling to the right to let the faster car past. We passed through a few smaller towns, where the more obvious businesses seemed poised to capitalize on vacation-goers, usually selling woven goods. 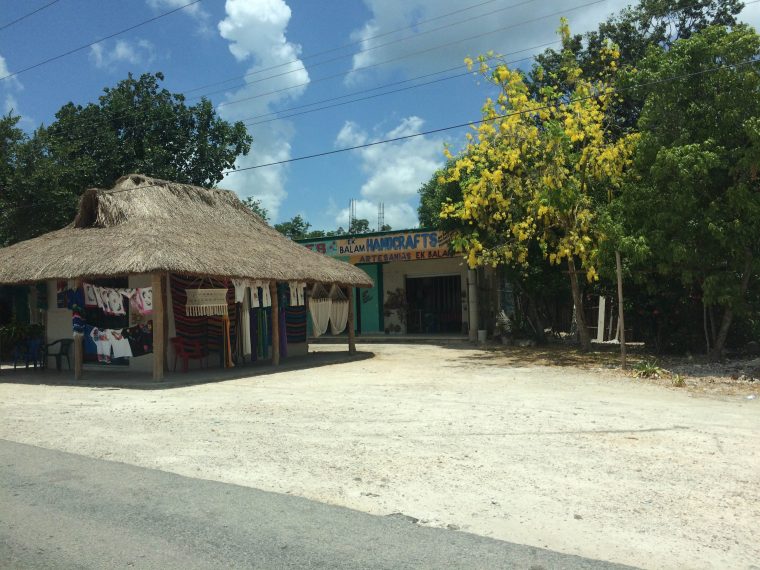 Plus, of course, there were many that appeared to be selling piles of gravel and dirt. 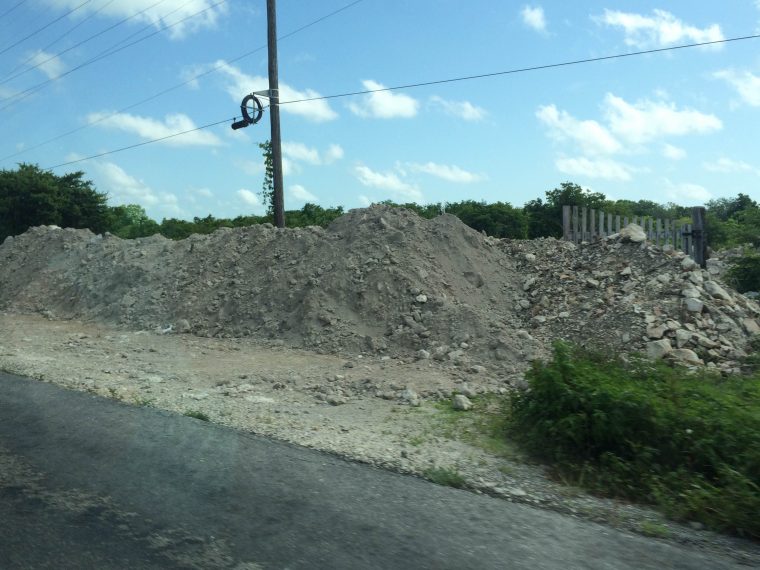 When it comes time to fill the tank, your first inclination will mostly likely be to check the signs at local gas stations to see where they sell the cheapest gas. However, then you pass a Pemex gas station, and there are no prices listed. “Huh,” you think as you continue driving, “I guess I just missed the sign. I will stop at the next one.” However, as you see the next gas station (another Pemex, by golly), you will notice that no, you hadn’t missed the sign–there just wasn’t one. The reason why is very simple: there aren’t other gas stations, and all of them will have the same price. 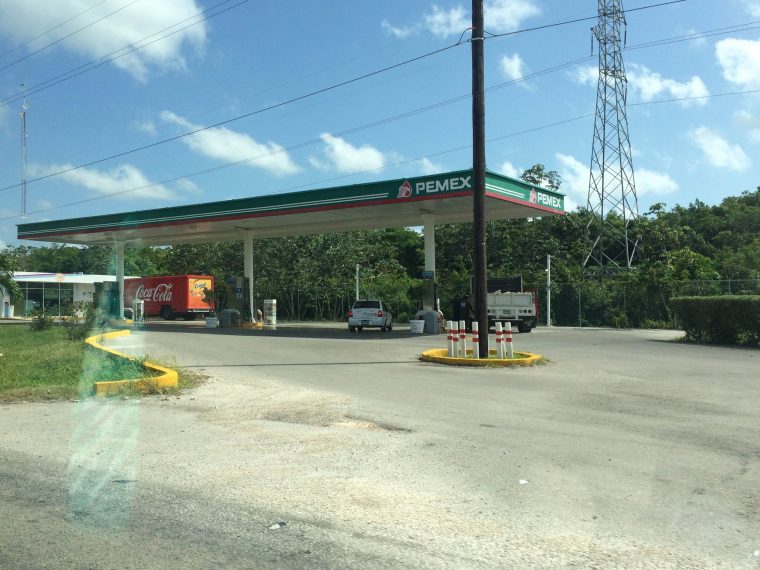 Each Pemex station is owned by the Mexican government, which consolidated all oil and gas companies into one monstrous company back in the 1930s. Some sites warn you to keep an eye out for scams such as not zeroing the pump, but we filled up at the airport, where a lot of commercial drivers go through, so it went fine.

There was one thing that you saw wherever you drove, though: Volkswagen Beetles. And these aren’t like your round little ladybug cars or that new style—the old style, first introduced all the way back in 1936. 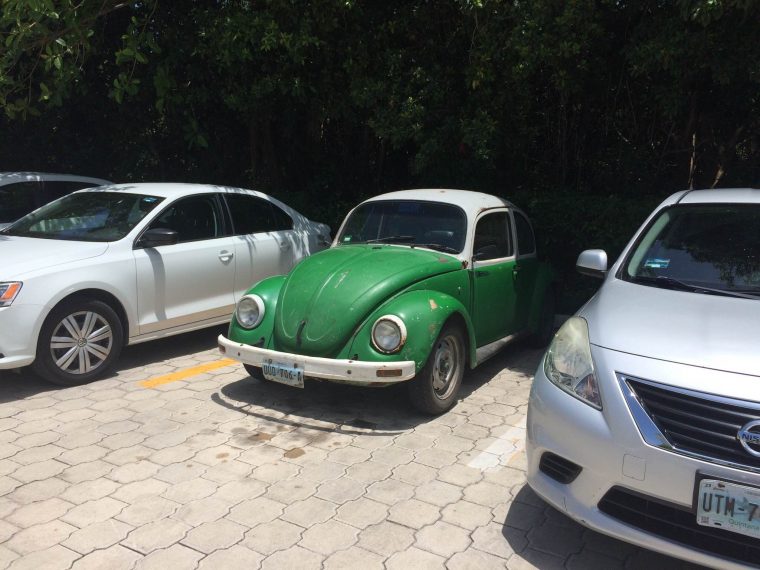 Seriously, they were everywhere—you glance into a bodega parking lot, there’s a Beetle; 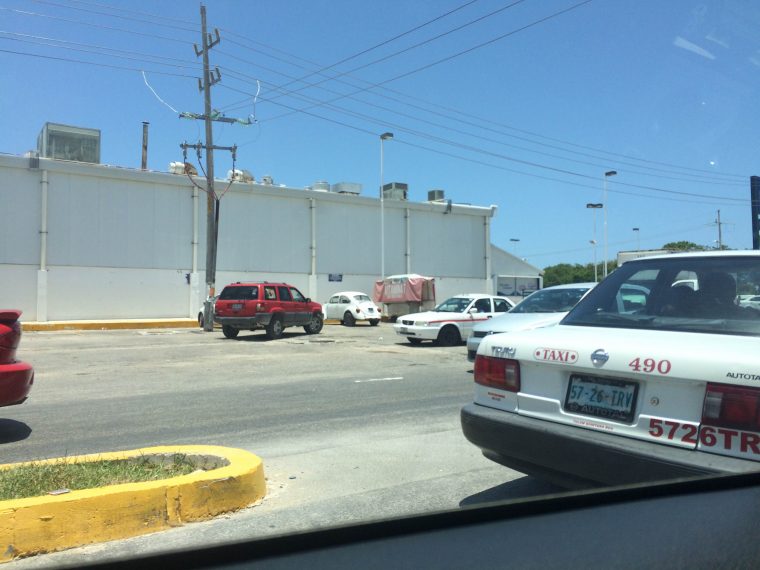 You drive through a rural town, there is a Beetle; 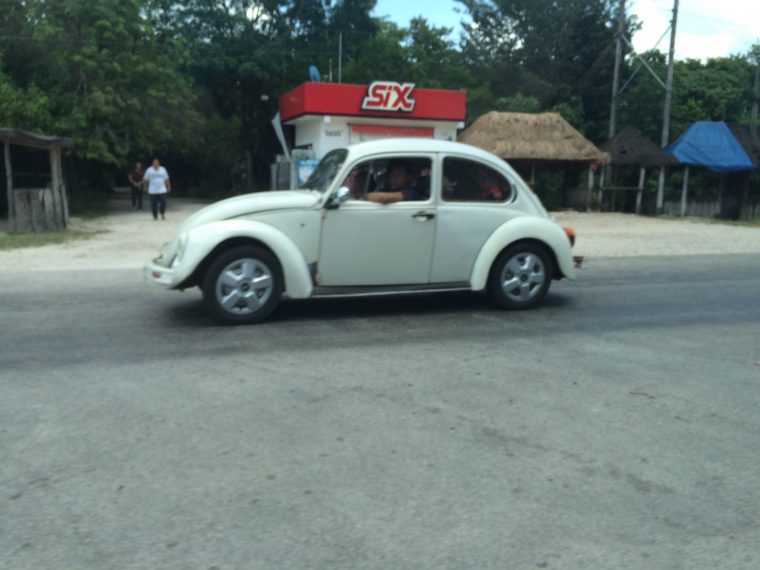 You happen to glance across the street, and there’s even a Beetle modified to be a truck. 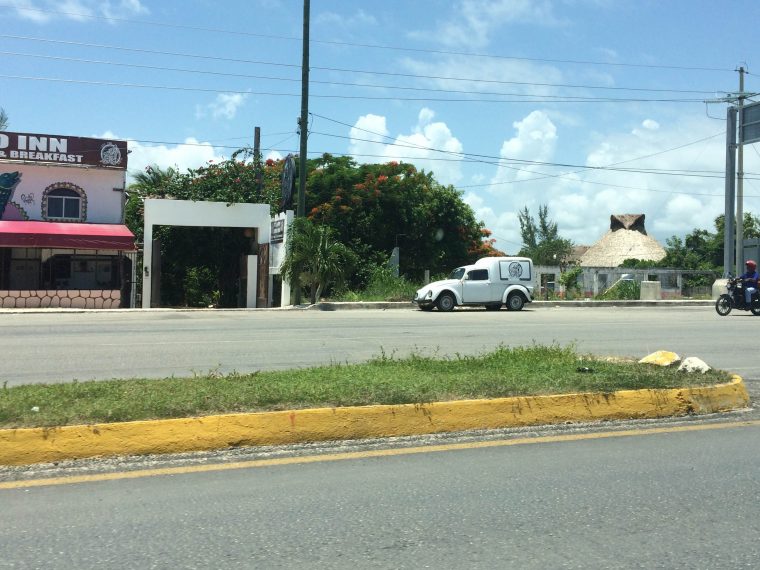 In short, I found out why after I came back—it turns out that Volkswagen had still been producing the Beetle in Mexico in its hump-backed configuration all the way up until 2003, with the Mexico City government declaring the car the official taxi of the capital city. Plus, since for years the Mexican auto industry has been depressed, the Beetle has just happened to be one of the most affordable car options, while having the added bonus of being inexpensive to maintain, repair, and modify while keeping up good fuel efficiency. 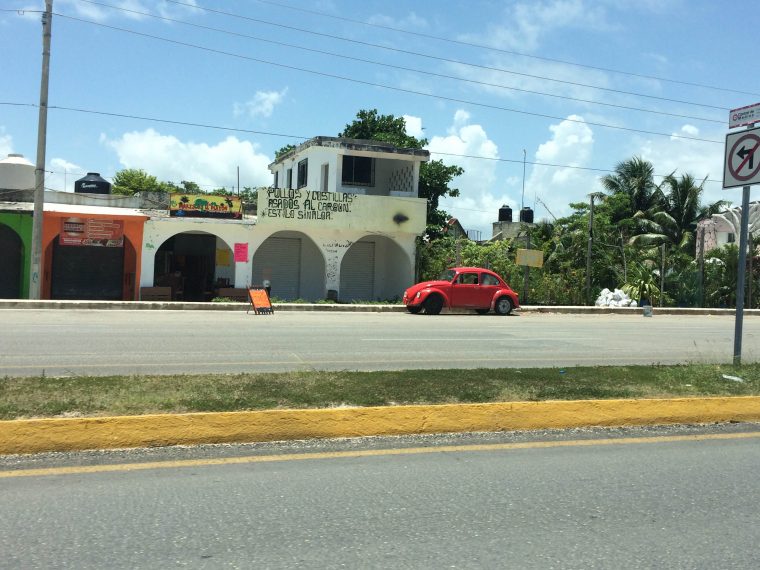 When we finally landed back in Columbus and made it back to our car, from a driving perspective it was a real relief (the vacation itself was awesome and I would definitely do it again). In our (comparatively) thickly-padded sedan, we cruised safely onto the bump-free highway with only one speed limit, where we were almost immediately cut off by some halfwit in a jacked-up pickup truck who refused to enter the highway behind us, despite the fact that it was about 11pm and the only other car on the highway was a fast-vanishing red blip in the distance. I guess some things are the same no matter where you go.

Why Must I Share the Road With Idiots? Allow me to tell you the tale of the drunk/high lady who blocked me in