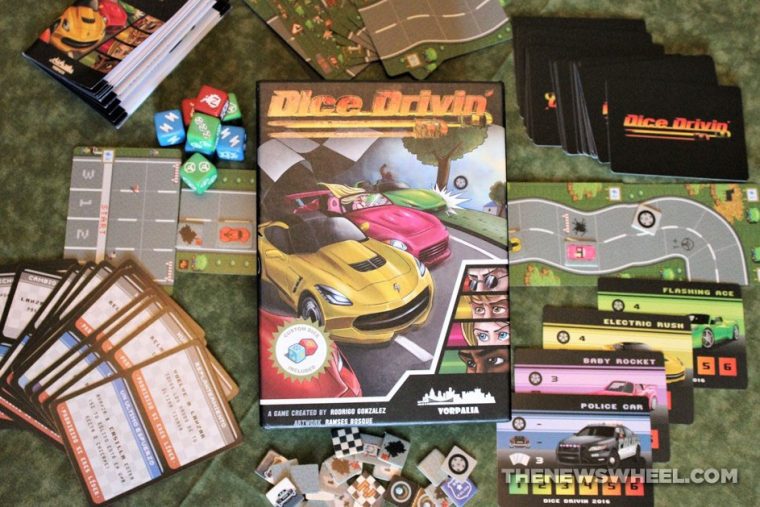 Good board games don’t just come from America and Germany; these days, they’re being made all over the world. Thanks to the popularity of tabletop gaming–and the possibilities of crowd-funding–all kinds of creative gaming titles are being released. Last year, Vorpalia Games in Spain created and released Dice Drivin’, a street racing card game inspired by classic 8-bit video games.

As a backer of the game who contributed funding to its creation, I was excited to try this bilingual, Spanish-produced car racing game.

Review of Dice Drivin’
The Retro Car Racing Board Game 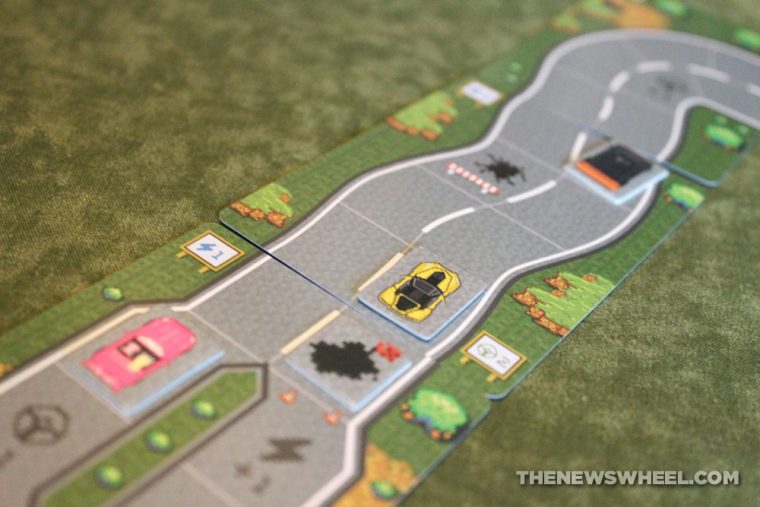 Like any good racing game, the goal of Dice Drivin’ is to move your vehicle across the finish line first.

To prepare for the competition, you must first select the car you’ll be operating, distribute the corresponding body damage/tire condition tokens, pass out some action cards, and place the cars at the start line. Choose how long of a game you want and shuffle together an appropriate amount of track cards and the finish line into a stack.

Players move their cars down the track–building it by drawing and laying path cards as they progress–by rolling a combination of dice in three colors: blue for speed, green for steering, and red for nitro boosts. Each section of the track requires different dice combinations to advance; successful rolls allow players to move ahead, while unsuccessful rolls–such as rolling multiple “crash” symbols–cause players to take body damage. Impaired vehicles use fewer dice but can stop for repairs if desired.

The game can be enhanced with different scenarios, such as a 1-vs-4 police pursuit, road hazard/power-up obstacles, or special-ability cars. Even famous Hollywood cars–including ECTO-1 and the DeLorean–can be driven! 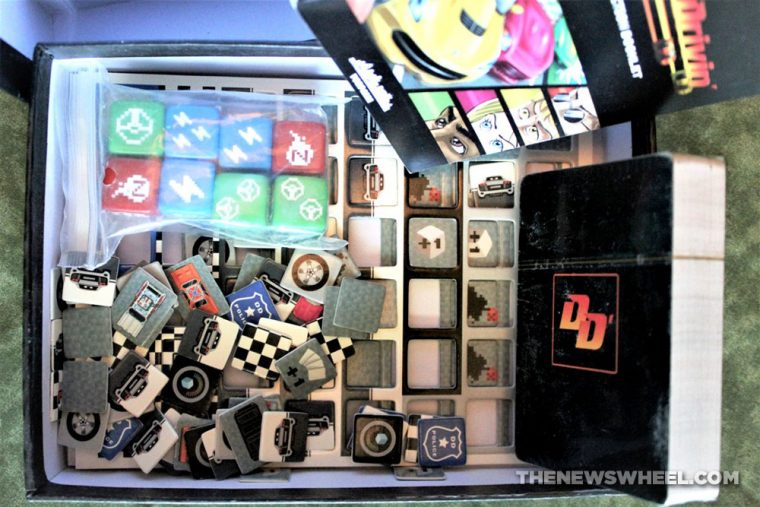 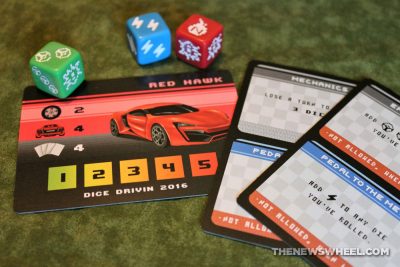 Upon initially opening the Dice Drivin’ box, I found that most of the small, square tokens were already shaken loose from their punch-out boards. They were all unharmed, but the perforation was certainly defined. We all wished the tokens were made of thicker cardboard–at least the ones showing the vehicles–so they’d be easier to pick up and move. There are also no baggies included to hold the numerous loose tokens, so you’ll need to procure one.

The custom-engraved diced are fantastic and definitely the star. It’s great that they’re in different, distinct colors to identify each dice type. The artwork on the cards is also a lot of fun–colorful and dynamic, reflecting the pixelated 8-bit video game style that was the game’s inspiration. The game overall could more fully embrace the 8-bit style that makes it unique, since only some of the components show it. I wouldn’t have gotten the impression that it was an 8-bit style game based off the box cover.

The deck of action cards is comprised of cards that are in Spanish and duplicate cards in English; that way, you can choose which cards to use based on your language. Some of the English cards have not been fully translated, though, and have some occasional words still in the original Spanish.

What Do You Get When You Combine Street Racing with Cthulhu? This crazy card game! 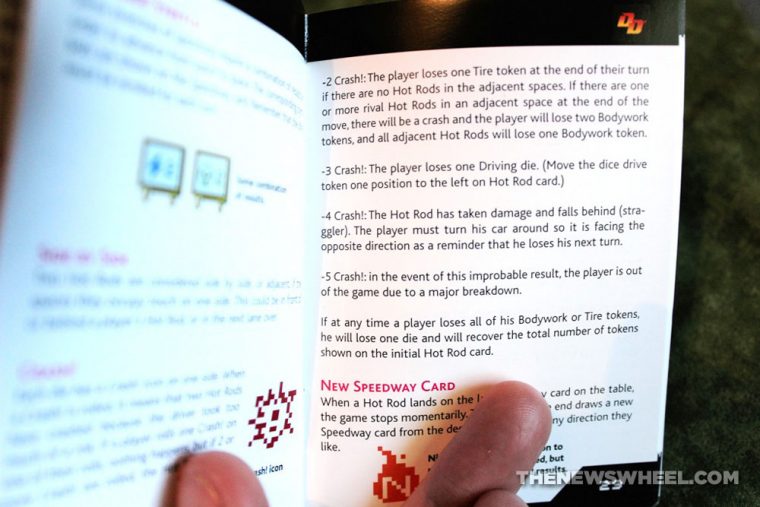 If you’re an English-speaker, it’s important to know that the original language of Dice Drivin’ is Spanish, so its instructions are bilingual. The translations to English are not perfect and contain some broken or confusing sentences, but overall is understandable enough to play the game. To remedy this, the directions could’ve contained more supplemental pictures and diagrams to illustrate what’s being described, whether component icons or gameplay scenarios.

The basic turn sequence and actions of Dice Drivin‘ move fluidly and won’t confuse most people. There are some aspects of the game (such as the way to treat certain track cards function or scenarios should be resolved) which aren’t stated explicitly but should–and can–be intuited through experience. 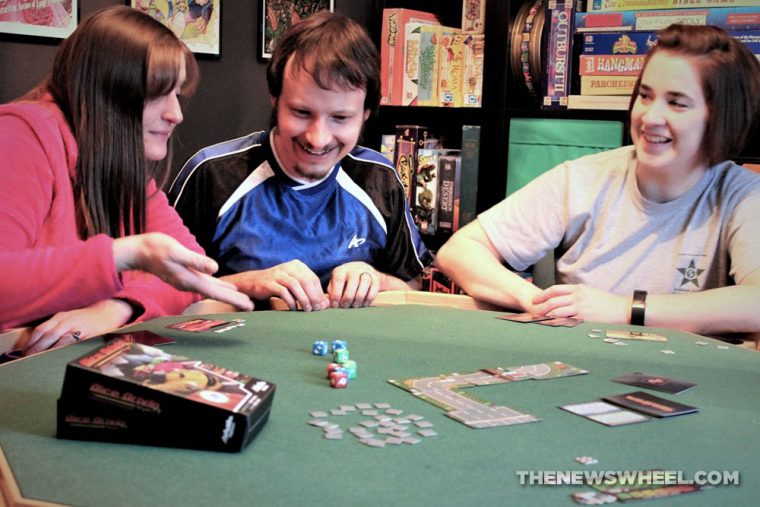 Dice Drivin’ was surprisingly fun for its balance of simplicity and momentum–with a lot of opportunities for customization too. Unlike many racing games that betray the high-thrills theme with tedious gameplay and slow-paced strategy, this clever game simply relies on a dice roll to determine movement, vehicle damage, and speed. 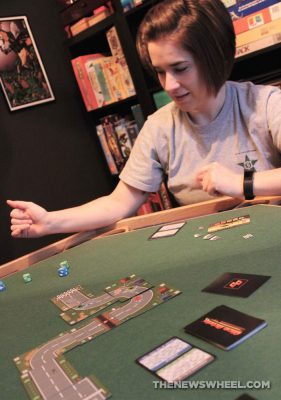 What’s most appealing about Dice Drivin’ is the role its customized dice plays in encouraging players to take risks even after enduring bad luck. It keeps the turns short, the game moving quickly, and the players engaged in the race.

Apart from token movement on the track and choosing the number of dice, strategy is minimal–which works, in this case. The track-building element works well to build suspense as the race progresses, and the ability to choose different scenarios keeps subsequent plays fresh. Players can tailor the length and complexity of the game based on the number of card tracks, vehicles, and power-ups they include.

Admittedly, Dice Drivin’ does have some hiccups with its translation and some of its components. It could use a wider-release second printing that keeps its price low, improves its tokens, and gives the rules a proofreading. There’s room for enhancement to refine the game, but it has a solid base as one of the most easy-to-learn and charmingly exciting motor racing games I’ve played.

Since the game’s license has recently been purchased from Vorpalia by a bigger company, keep an eye out for a wider second edition printing you should definitely get your hands on.

Dice Drivin’ is not available for public purchase currently, unless sold second-hand from backers of its Kickstarter release.