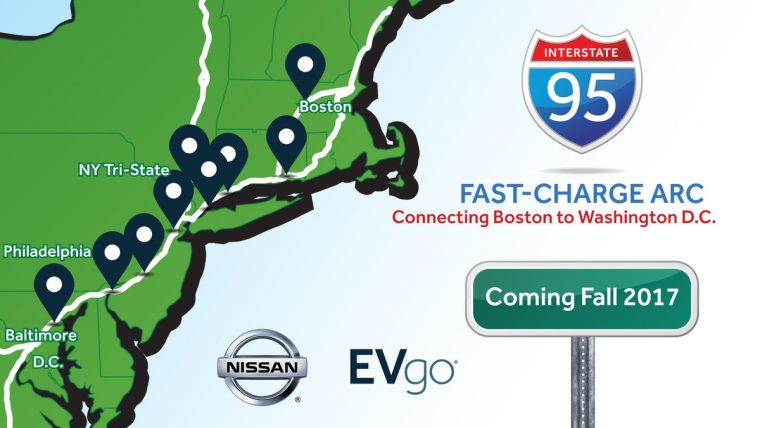 The 500-mile trek between Boston and Washington D.C. will be a little less stressful this fall for drivers of electric vehicles (EVs).

Nine electric-vehicle DC-fast-charge stations featuring 50 total chargers that have two fast-charge plugs each will be peppered along Interstate 95 (I-95) as a result of the “I-95 Fast-Charge ARC” plan devised by Nissan and EVgo. The plan was revealed at the opening ceremony of the 2017 New York International Auto Show, and construction has already begun.

According to Nissan, each of the nine charging stations along I-95 will have the capacity to charge four or more electric vehicles at the same time (it takes approximately a half hour for a Nissan LEAF to retain an 80 percent charge when plugged into a DC fast charger).

Future EV technologies have already been considered for the ARC; according to Nissan, the charging sites have been “pre-wired for a high-power charging power output of up to 150kW with simple upgrades once such technology is available to consumers.”

JeSean Hopkins, senior manager, EV infrastructure strategy & business development, Nissan North America, Inc. said, “Regardless of range capability, a convenient fast-charge infrastructure along high-traffic routes is imperative in the mass-adoption of electric vehicles. This element of the EV equation is seemingly overlooked by others, but we’re all-in. Following a similar project in California, this is our second ‘corridor’ project in the U.S. and completion is expected in time for the launch of the all-new Nissan LEAF.”

Rob Barrosa, vice president, OEM strategy & business development at EVgo added, “This charging corridor will provide the best public charging experience available in the U.S. to drivers in one of the most densely populated and highly trafficked routes in the country, affirming Nissan’s commitment to EV drivers.”