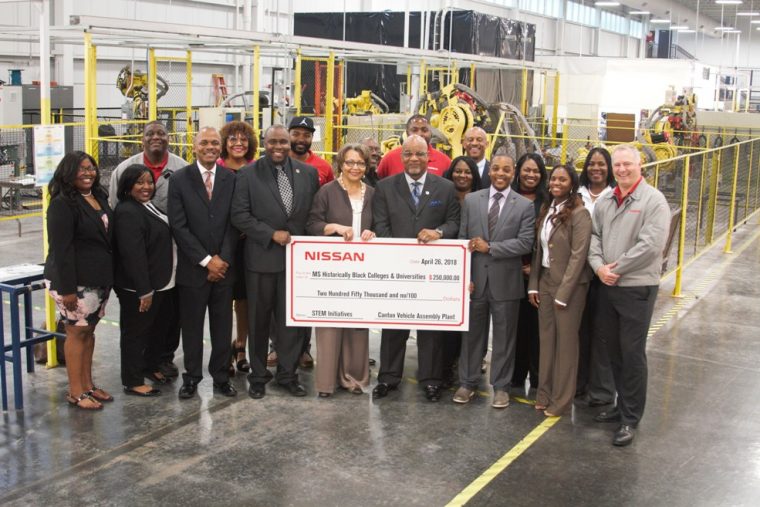 Designing and building cars has always been about engineering, but lately they are gaining features and safety systems that require knowledge of technology as well. To help keep the future of American manufacturing and other science, technology, engineering and math (STEM) fields strong, Nissan wrote checks for $250,000 to seven historically black colleges and universities (HBCUs) in Mississippi.

On A Student Budget? Learn the difference between buying a used or Certified Pre-Owned Nissan

Since its Canton, Mississippi, plant opened in 2003, Nissan has donated about $2 million in HBCUs with a lot of it directed towards STEM education. The automaker also hires HBCU students like Ayanna Lynn. She is a civil engineering master’s student Jackson State University while also fulfilling the role of process engineer at Nissan Canton. “I am grateful and proud to work for a company that supports HBCUs. The company is fully committed to their success.”

“Our continued commitment to HBCUs, specifically in the areas of science, technology, engineering and mathematics, is vital to fostering the minds of the next George Washington Carver or Mae Jemison,” said Jeffrey Webster, director, Diversity and Inclusion, Nissan North America, Inc. “These institutions have implemented proven practices to assist students in STEM fields, and we are proud to help make their students’ career dreams a reality.”

Pile On In: Check out the vehicles in the Nissan lineup best for families

Thanks to Nissan’s large locations in Mississippi and Tennessee, students in both states historically have received a lot of support from the automaker. In 2017, The Girl Scouts of Central Mississippi, Central Mississippi Chapter of the National Coalition of 100 Black Women, and Nissan all worked together during Black History Month to take more than 200 girls in Greater Jackson to see the film Hidden Figures. Nissan is also a dedicated partner to Imagination Library, which promotes literacy around the country.

As always, Nissan remains committed to the communities it operates in. We’re sure this is not the last time we’ll write about its contributions to education.