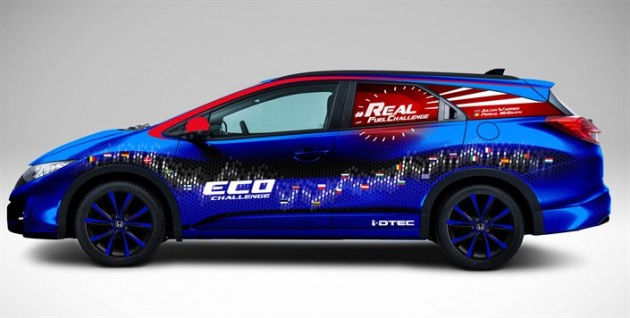 Honda plans to prove the hyper-efficiency of its 1.6-liter i-DTEC engine with the ultimate test: a 13,000 kilometer (8,000 mile) drive across all 24 contiguous European Union countries, with the goal of setting a new Guinness World Record title for fuel efficiency.

Today the Japanese automaker announced that on Monday, June 1st, two members of the automaker’s European Research & Development team will begin the journey in a Honda Civic Tourer. Starting out from Aalst, Belgium, the pair will head towards the Netherlands and Germany, as they spend the next 25 days circling the continent in a clockwise direction, returning from their 13,614 km (8,459 mile) adventure to Aalst on June 25th.

The official Guinness World Record title will be “Lowest Fuel Consumption—all 24 contiguous EU countries,” and will be measured in litres per km and miles per gallon calculated over the whole trip. If successful, Honda says the record will apply to all cars, including hybrids and electric models (meaning it’s only a matter of time until two dudes in a Tesla decide to take an epic road trip for a run at the title).

Official Guinness World Record rules stipulate that the same two drivers must be in the car for every mile of the journey. Swindon, UK-based Honda R&D colleagues Fergal McGrath and Julian Warren have volunteered for the challenge/paid vacation, and will be tasked with driving an average of 592 km (367 miles) for seven and a half hours each day, for 25 straight days. 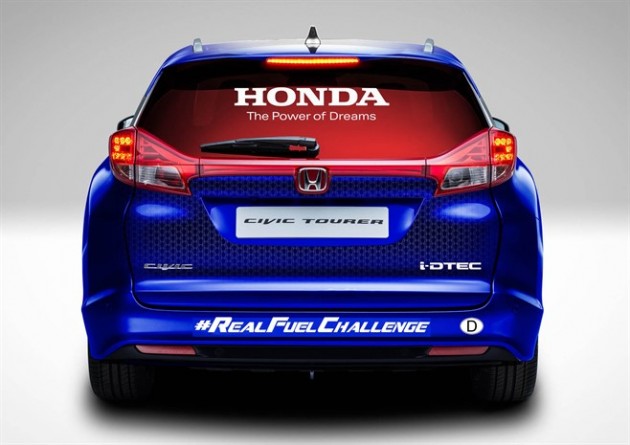 “We are very much looking forward to the record attempt, and while we’re excited, we’re both a little nervous about the scale of the task that awaits us,” said McGrath. “A huge amount of planning has gone into taking on this challenge and we look forward to what we hope will be a successful result when we return to Brussels on June 25th. But we’ve got more than 170 hours behind the wheel to contend with first!”

The whole thing is basically a promotional stunt to illustrate the fact that the 1.6 i-DTEC engine can “consistently out-perform” its fuel efficiency estimates in real-world driving. As such, the two will be driving a standard Civic Tourer, with no special modifications to increase efficiency. They’ll also fill the tank to the brim at each stop, so that they don’t get any special advantages from reducing weight.

“Since its launch in 2013 we have seen the 1.6 i-DTEC engine consistently over-perform on real-world fuel efficiency in our Civic, Civic Tourer and CR-V models, and this is our opportunity to put it to the ultimate test on a huge scale,” said Kate Saxton of Honda Motor Europe. “We are very confident of a great result and we wish the team all the very best of luck as they take on the challenge.”