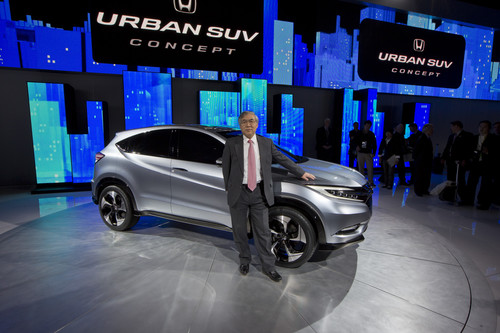 Last year at the Detroit Auto Show, Honda unveiled the Urban SUV concept, a Fit-based crossover that sits below the CR-V in both size and price. More recently, the Japanese production version was uncovered at the 2014 Tokyo Motor Show and bore the name Vezel.

That’s all well and good, but what American drivers want to know is what badge it will wear here in the States, as it begins production in North America very soon. While Honda has been mum on the name of the new Fit-based crossover slated for the U.S., Temple of VTEC reports that the new name for the new model is the Honda HR-V, which follows the CR-V structure.

After catching wind of the Honda HR-V name, AutoBlog reached out to Honda for comment, but Honda would only state that Honda will “announce the name in the near future.”

If the Honda HR-V name sounds familiar to you, you’ve got a good memory. While it’s never been used in the States, it was used for a crossover across the pond between 1999 and 2006 and was conveniently based on the Fit’s predecessor, which was called the Honda Logo.

So do we know for sure that it’ll be called the HR-V? No. Are we pretty sure? Absolutely.