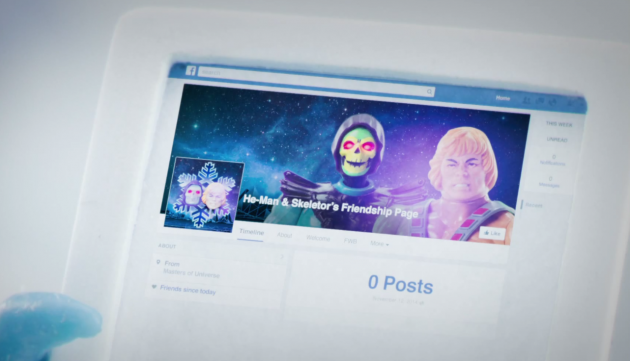 It’s Facebook official, so you know it’s true: Skeletor and He-Man are friends now, according to Honda Toy Tunes

With the exception of those lame Fred Savage-narrated home movies, Honda has been on a real roll lately when it comes to its promotional videos. From the OK Go music video featuring Honda UNI-CUBs, to the awesome (and awesomely fake) Honda Civic Type R “The Other Side” film, to the recent Happy Honda Days commercials starring classic toys.

Now, Honda is keeping the party going with some new “Honda Toy Tunes,” which feature some of those aforementioned action figures singing seasonal melodies. The first (and best) involves the villainous Skeletor, fresh off of his stint taking over Honda’s Twitter account, proclaiming his unexpected love for arch-rival He-Man:

In another video, Honda goes with the romantic rather than bromantic angle by having G.I. Joe woo 80s rocker Jem, outraging G.I. Joe-Barbie shippers the world over:

And finally, here’s Gumby and Pokey involved in some very cute antics:

Believe it or not, there’s a point to all this: whichever of these three videos gets the most views, Honda will donate money to the charity of that toy’s, er… choice. If Jem and G.I. Joe win, a donation of $50,000 will be made to the Children’s Hospital of Orange County. If Gumby and Pokey are the most popular, that money will go to the Pediatric Brain Tumor Foundation, and if Skeletor reigns victorious, the 50 grand to the Little League Urban Initiative (although since Skeletor is evil, he’ll probably dupe the hapless little leaguers at the last second and give all the money to the Yankees instead).

It’s sort of strange to see Skeletor taking on such a prominent and comedic role for Honda all of a sudden. He always struck us as a pretty deadly serious guy. Then again, maybe he’s been joking around all of these years, and most of us just never really “got” his unique sense of humor.