No other superhero exemplifies the innovation, engineering prowess, and confidence striven for by today’s automakers as much as Iron Man does. A figure as smart as he is cool, Marvel’s rich tech wiz has become an idol the world over due to his on-screen portrayal by Robert Downey Jr. Considering the many mechanical wonders that Tony Stark has produced, it’s no wonder that the character has become an inspiration for the latest vehicle technology and designs being released.

Paying homage to the man in metal, Hyundai is releasing a limited edition Iron Man variant of its brand-new Kona crossover. Who better to promote the vehicle, therefore, than Marvel’s own suited hero?

More Information: Other changes to the 2018 Hyundai lineup

Check Out the Stylish Kona in New Hyundai Commercial

Hyundai has released a 90-second promotional video for the upcoming Kona Iron Man edition portraying a unique way that the crossover could’ve been created. In a workshop indicative of Stark’s old base—complete with a Jarvis-like robotic arm—a mechanic goes through the work of tweaking and painting the vehicle, inspired by the blueprints of War Machine’s metal suit. 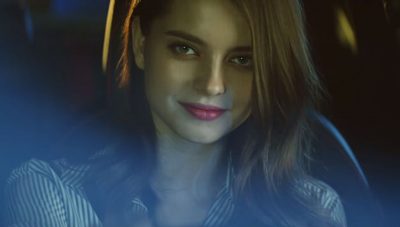 While the video doesn’t show Tony Stark himself, the Kona receives a close-up comparison to the intricate facets of the Iron Man suit, emphasizing the design similarities between the two—particularly in the front fascia.

The Kona x Iron Man special edition isn’t just a weak movie tie-in; it features a number of fitting appearance enhancements that accentuate the vehicle’s already-futuristic design. It’s slightly wider, has 19-inch off-roading wheels, and features a grey body with red/gold accents and Iron Man/Marvel logos. The LED headlamps and side mirrors have even been slimmed to resemble the superhero’s mask.

Hyundai Awards: Learn what the accolades the Sonata and Santa Fe Sport earned