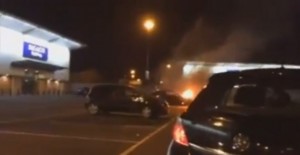 The untimely death of Fast and Furious star/import tuning enthusiast Paul Walker inspired a number of touching tributes: fans and fellow actors took to Twitter to voice their sorrow for Walker’s passing and celebrate a life well-lived; friends and family gathered for his funeral, and fans left candles and flowers at the crash site; and Universal announced that proceeds from the newly-released Fast & Furious 6 DVD/Blu-Ray would be donated to Walker’s Reach Out WorldWide charity.

Then there is the slightly less-touching and considerably more-idiotic gesture of revving the engine of a Ford Focus for 20 straight minutes until the vehicle catches on fire, and then letting it burn to the ground.

A group of car enthusiasts gathered at the Links Road Retail Park in Aberdeen, Scotland, on December 14 to pay tribute to the late actor with a quickly-organized cruise-in of sorts.  Things were relatively calm until around 10 p.m., when a 19-year-old driver got the idea to rev his engine for 20 straight minutes in a kind of tribute, which led to the fire.

According to STV News, a police spokesman said that the fire was quickly extinguished by a unit from the Scottish Fire and Rescue Service and that nobody was harmed.  The driver of the Focus is being charged with reckless conduct for his senseless decision.

Quotes from The Daily Mail were quick to tongue lash the youth responsible for the idiotic Paul Walker tribute: councilor Andrew May said, “I cannot understand the mentality of a person who would do a thing like that,” and fellow councilor Nathan Morrison called the stunt ridiculous.  Track and Street Grampain, who organized the event, called the driver “stupid” and said the organization was “embarrassed” by what transpired.

Brought to you by Brown Daub Used Cars in Easton, PA.