Jaguar’s Crossover is Called the F-Pace 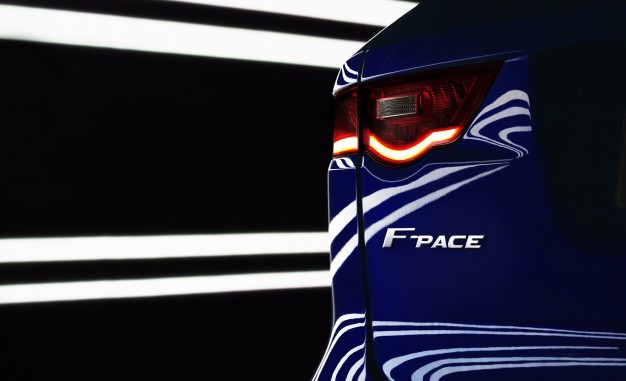 Behold part of the butt of the 2017 Jaguar F-Pace

We hadn’t heard much about Jaguar’s plans for the 2015 North American International Auto Show, but today has yielded some interesting developments. Jaguar has confirmed that it will be doing about the most inevitable thing in the world and adding a crossover to its lineup, and it will be called the F-Pace.

The F-Pace will be based upon the 2013 C-X17 Concept from Frankfurt (and potentially the five-seat version that premiered that same year at Guangzhou), and it will share the same aluminum platform as the Jaguar XE. This means that it would likely also be produced at Solihull with release slated for some time in 2016.

“The Jaguar F-PACE, inspired by the F-TYPE, represents a perfectly judged balance of style, performance and practicality,” says Ian Callum, Director of Jaguar Design. “It offers a unique combination of Jaguar sports car inspired exterior design, fused beautifully with a thoroughly practical and spacious luxury interior. The F-PACE is our family sports car.”

The C-X17 Concept is built on a RWD platform and uses Torque Vectoring by Braking and “a range of engines with differing capacities, including a new family of high-output and efficient four-cylinder petrol and diesel engines.” Whether this all translates over into the production model remains to be seen, but it’s a safe bet that the F-Pace won’t carry over the X-C17 Concept’s incredibly zany interior. If for some reason it does, all of the money. All of it.

*throws money at the screen*

Jaguar will likely release more information about the F-Pace at or in coincidence with the North American International Auto Show, so stay tuned for more details.