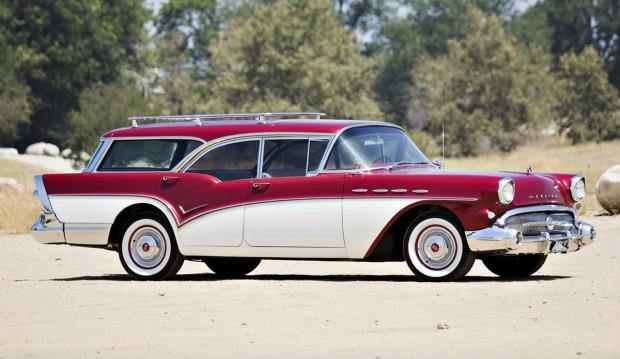 Last Friday we told you about a 1962 Ferrari 250 GTO that was purchased for a jaw-dropping $38 million, setting a record for the most expensive car ever sold at auction. Now, Road & Track is reporting on another vehicle that was overpaid for this weekend at Pebble Beach, but this story might fill you with less envious resentment for the kind of privilege than enables someone to spend millions of dollars on a sports car – even though it involves Jay Leno and George W. Bush.

On Saturday night, Gooding & Company auctioned off a 1957 Buick Caballero Estate Wagon. The vintage hardtop station wagon was expected to sell for somewhere in the range of $100,000 to $125,000.

Your Vacation Buddy: Buicks are Built for Road Trips

When the time came for the crying of lot 47, David Gooding introduced Jay Leno to the audience. Leno told the crowd that his Big Dog Garage had restored the car at no cost to benefit The George W. Bush Military Service Initiative, a charity for post-9/11 veterans. The Buick, which was autographed by the former president, then sold for a remarkable $300,000.

More shocking than the price, though, is what happened next: the buyer walked onstage and donated the car back to David Gooding, prompting a two-minute standing ovation from the audience. The car was then auctioned again, this time to the original runner-up bidder, who paid $280,000 for the Buick.

In total, $580,000 was spent on a car that is worth one-fifth of that price, all in the name of supporting veterans. This may be the only time you will have your heart warmed by the thought of rich people spending obscene amounts of money on cars, so enjoy it while it lasts.