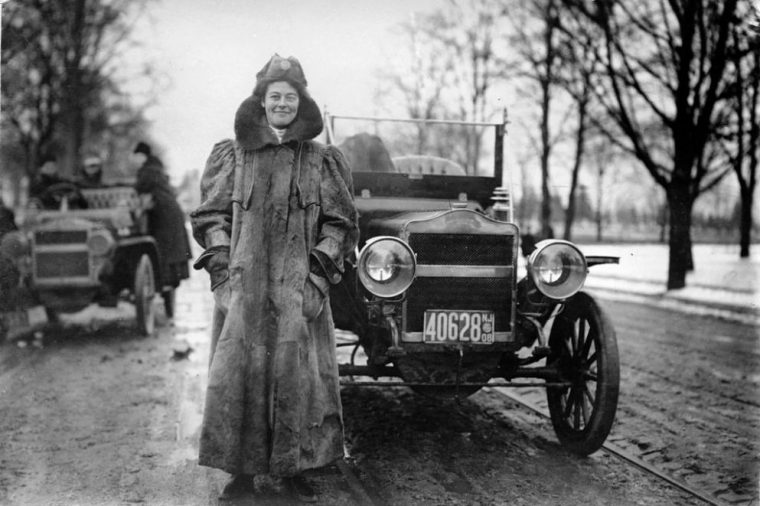 Alice Ramsey and her trusty ride

When we think of the early history of the automobile, we often think of the men behind the invention, like Henry Ford, Louis Chevrolet, and Walter Chrysler. However, there were many women that helped turn the car from passing fad to the staple of American life it is today. One of these women was named Alice Ramsey, and she holds the title of the first woman to drive across the United States.

Before she drove cross-country, Alice Ramsay was making waves in the automotive world as an endurance driver. Her husband had bought her first car with safety in mind, as cars on the road had scared his horse and he did not want her to get thrown. She loved to drive, and the Maxwell-Briscoe Company (later made part of Chrysler) was impressed. The company proposed that she drive cross-country in one of their vehicles as a way to advertise how durable it was, and, according to the Smithsonian, show the world “that a Maxwell could take anyone—even a woman driver—all the way across America.”

On a rainy day in June 1909, Alice kissed her husband goodbye and started on a journey that would take her 59 days and about 3,800 miles. If you think road trips are bad now, you clearly have never had to use guidebooks for directions. Not the modern helpful guidebooks with foldout maps, but books that would give directions by telling you to “turn left at the yellow barn”. According to Ramsay, she was foiled by one such direction, because the farmer was pro-horse and painted the barn green after the guide was published. Ramsay also had to make several mechanical and tire repairs to the car herself, and at times actually had to be towed by horses to get it out of a muddy rut in a dirt road. When the transmission overheated and needed more water, Ramsay and her female co-pilots took water ounce by ounce to the car using their toothbrush holders so that they could continue.

After her heroic drive, Alice continued to cross the country as she raised her children, losing count after 30 trips. She was the first woman ever inducted into the Automotive Hall of Fame, and wrote about her first trip in a book called Veil, Duster, and Tire Iron. The next time you get behind the wheel for a long road trip, just remember: If Alice Ramsay can do it without a map or reliable road network, you can make your drive.