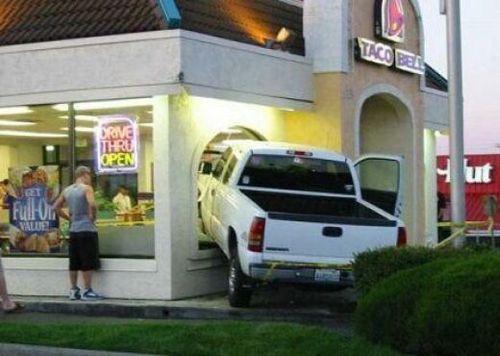 This one is a big no-no.

In the 1940s, America’s fastest food option was the drive-in. Like you see in various nostalgic movies, these restaurants had customers drive up and park, and then brought the food to them on a platter that clipped onto car windows.

However, by the late ’40s, this system had been in use since the first drive-in opened at a Texas restaurant chain called the Pig Stand in 1921. Restaurants had already been working furiously to outdo each other in speed, introducing roller-skate carhops and call-to-order systems that let the customer call the chefs directly, no order-taking needed.

The first actual drive-thru has a few claimants. Money magazine points to Red’s Giant Hamburg on Route 66 in 1947. Culinary Lore points to the Pig Stand No. 21 in 1931, which let customers order through a window, with the chef bringing the food outside. However, arguably the most successful of these first drive-thru restaurants was California’s In-N-Out Burger, which opened in the Los Angeles area in 1948.

The first In-N-Out features a novel design. It had a 100-square-foot building housing five cooks behind glass walls making take-out meals. It featured absolutely no seating or outside parking, and let customers order through a then-state-of-the-art two-way intercom.

In-N-Out’s drive-thru was a great success, but didn’t catch on quite as quickly as you might think. The first McDonald’s, for instance, opened the same year, but just served burgers from walk-up windows — the chain didn’t set up a drive-thru until the mid-’70s.

In-Car Food: Here’s how you can transport food in the car without making a mess

The drive-thru changed both quick-service restaurant food and car design. Fast-food places quickly developed easily-eaten foods, with the hamburger ruling over drip-free tacos and boneless fried chicken. Then, cup holders rapidly became more and more common until, as the History channel put it, “it was common for cars to feature more cup holders than passengers.”