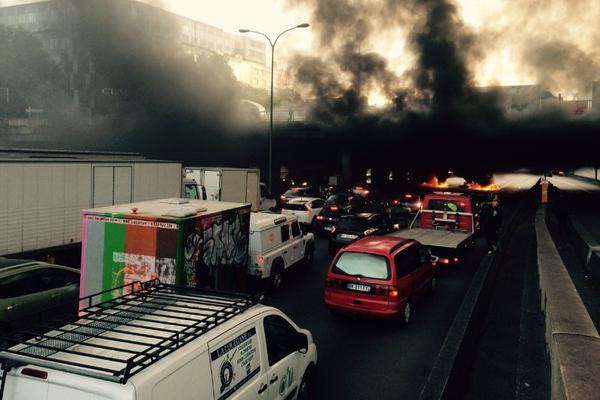 Traffic is at a standstill as smoke rises in the distance during the Parisian taxi protests
Photo: RTL France

Ah, Paris. The City of Lights, land of romance, home of the Eiffel Tower—and site of one of the biggest anti-Uber protests ever seen.

The city of Paris is currently gridlocked thanks to thousands of French taxi drivers protesting the use of the popular private chauffer service. Drivers around the city have created road blocks in the French capital and other major cities throughout the country as tensions between taxi unions and private car services continue to run high. Many protestors have burned tires, turned over cars throughout France’s major highways, and started fights.

The French taxi unions’ grudge against Uber and the company’s UberPop service, which uses non-professional drivers, has been a long one. Many French taxi drivers believe that the company has an unfair competitive advantage because it employs amateur chauffeurs who don’t pay steep licensing fees. In France, the average one-time taxi license fee can cost up to the equivalent of $270,000.

As a result of the Paris Uber riots, the French interior minister, Bernard Cazeneuve, has ordered the city’s police to implement a ban on UberPop in the capital. “I have given instructions, considering the grave problems with public order and the development of this illegal activity, to the police prefecture in Paris to ban UberPop activities,” he told reporters.

It looks like the French taxi unions are getting exactly what they want. Vive la résistance!