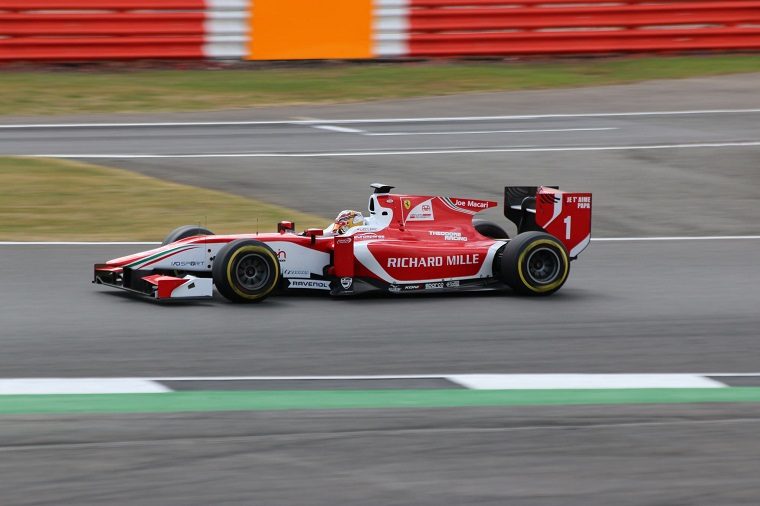 The FIA Formula 2 Championship, formerly known as the GP2 Series before it was renamed in early 2017, is the highest-level racing competition that feeds into Formula One, and the one that awards the most points toward a driver’s Super License. Drivers competing in this championship have usually spent several years in junior formulas and are actively seeking a seat in Formula One.

Though winning a Formula 2 title is no guarantee to secure that seat, as 2012 winner Davide Valsecchi and 2013 winner Fabio Leimer can attest to, the vast majority of drivers who have earned very strong results in Formula 2 have gone on to at least get a taste of Formula One.

Also unlike Formula One, drivers can earn additional points by securing pole position and the fastest lap of the race.

Formula 2 is a spec series, meaning that all teams and drivers use the same Dallara GP2/11 chassis, naturally-aspirated Mecachrome 4.0-liter V8 engine, and a range of Pirelli tires. They use a Hewland sequential six-speed sequential transmission and, like in Formula One, a Drag Reduction System on the rear wing.

It is believed Formula 2 regulations will soon be changed to be better aligned with F1. F2 is supposed to be a stepping stone toward F1, but ever since the latter switched to turbocharged hybrid V6 engines in 2014, the correlation between the two series has been weakened, making it less likely that successful F2 drivers can immediately do well in F1 without extensive testing.

The following table shows the top three results of every FIA Formula 2 Championship and GP2 Series since 2005. Drivers in bold are currently in Formula One, while drivers in italics were formerly. Names in bold and italics are currently test and/or reserve drivers. 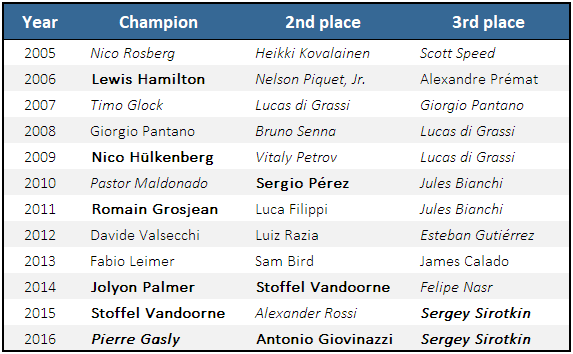 The leader of the current Formula 2 championship is Charles Leclerc, a Ferrari Academy Driver who some believe will drive for the Ferrari-powered Sauber F1 team next year.