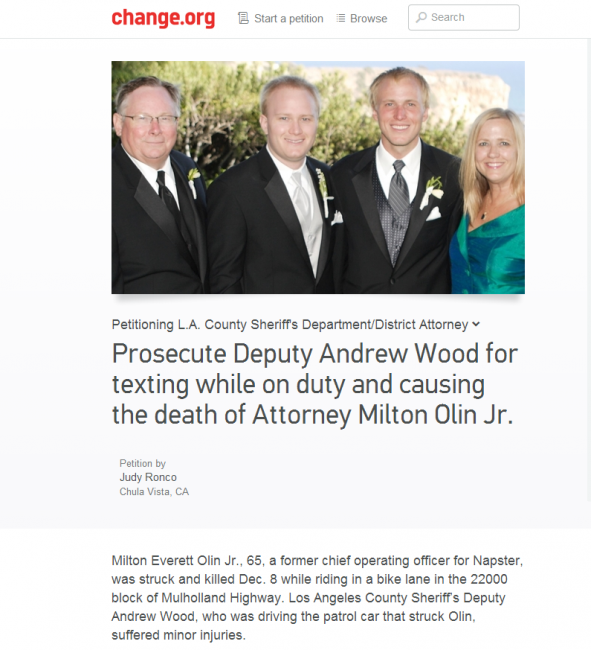 The Change.org petition to prosecute Deputy Andrew Wood for the death of Milton Oltin, Jr. has crossed 55,000 signatures

Update: The Los Angeles District Attorney has ruled that Deputy Wood acted “lawfully” in the events leading to Olin’s death.

The capacity for genuine good that can be brought about by Change.org petitions may seem somewhat diluted by people using the platform for everything from getting the internet to stop saying mean things about their books and imploring In-N-Out Burger to start carrying a vegetarian option to telling Jay-Z and Beyonce to comb their child’s hair and pushing for Weird Al to play at the Super Bowl. In spite of this, Change.org can be an incredibly useful tool when plied in worthwhile circumstances. Take for example the Change.org petition to prosecute Deputy Andrew Wood for texting while on duty and causing the death of Milton Olin, Jr., which recently crossed the 50,000-signature threshold and is less than 20,000 signatures away from its goal.

According to the story, Olin was riding in a bike lane in the 22000 block of Mulholland Highway on December 8 when he was struck and killed by a police cruiser driven by L.A. County Sheriff’s Deputy Andrew Wood. According to a search warrant affidavit obtained by the Daily News, Wood’s phone record indicate that he sent six text messages from 1 and 1:04 pm on that day, indicating that he was likely texting when he killed Olin.

“Witnesses who were in a vehicle directly behind Deputy Wood’s radio car at the time of the collision told investigators that the radio car failed to negotiate the left curve in the roadway and proceeded straight into the bicycle lane,” Sheriff’s Detective Russell A. Townsley wrote in the affidavit, according to the Daily News. “The witness also stated that they did not see any brake lights on the radio car until after they saw Mr. Olin’s body in the air.”

Despite indications of Wood’s negligence, no charges were filed against him and no disciplinary action was taken. After eight months, Olin family attorney Bruce Broillet says that the family has yet to receive so much as a collision report.

“This accident never should have happened,” Broillet said. “The negligence of a sheriff’s deputy caused this terrible tragedy.”

Olin’s family filed a claim against the L.A. County Sheriff Department on April 29 and followed it up with a wrongful death lawsuit, filed July 16. The family is seeking general damages in excess of $50,000, unspecified economic damages, and reimbursement for legal fees and costs related to Olin’s death.

The call for the L.A. County Sheriff’s Department/DA to prosecute Wood for texting is garnering a lot of attention as it sits at an intersection of public concern. Distracted driving laws have never been harsher; yet, in 2012, at least 3,328 people were killed and 421,000 were injured in crashes involving a distracted driver. California State law bans handheld phone use and texting for all drivers; this does not preclude police officers.

The story of Deputy Andrew Wood also happens to coincide with the public outcry following the deaths of Eric Garner and Michael Brown. Garner, an asthmatic, was choked to death by NYCPD officer Daniel Pantaleo in front of a crowd in Staten Island. Brown, an 18-year-old from Ferguson, Missouri, was shot to death by officers on Saturday. Despite Ferguson police officials alleging that there was a struggle, witnesses say that Brown was shot by a police officer while his hands were visibly in the air. As with the case of Andrew Wood, none of the officers involved in the deaths of Garner or Brown have faced prosecution for their actions.

Sign the petition and lend your voice to a worthwhile cause: making it known that distracted driving is negligence regardless of what uniform the driver is wearing.