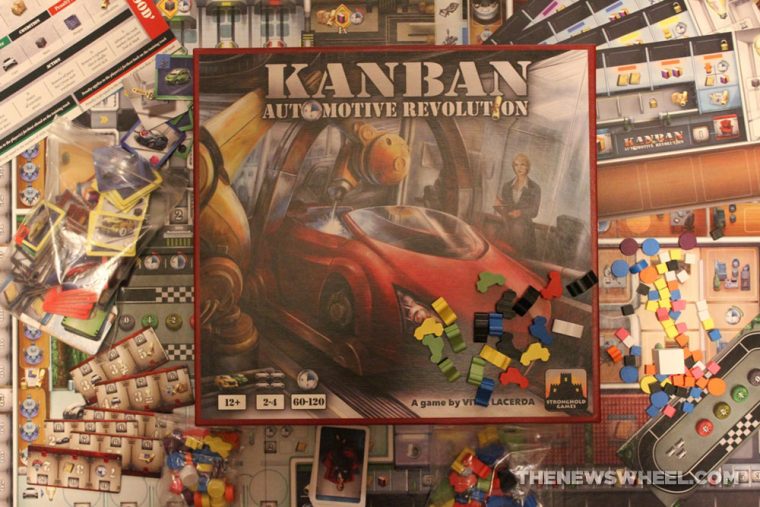 For the majority of today’s “non-digital” gamers, tabletop gameplay is a casual, entertaining diversion, which is why many of today’s titles are easy or mid-level strategy with a single, streamlined design anybody can learn on their first try. Few titles actually strive to replicate the realistic complexity of true-to-life industries and experiences. But there is a small niche of economic, political, and military simulation games that strive to do just that.

One designer, Vital Lacerda, has made a name for himself in the gaming community for creating highly-complex, multi-hour simulations about a variety of industries, such as Vinhos (winemaking), CO2 (factory carbon emissions), and The Gallerist (art curation). His most popular title is arguably Kanban: Automotive Revolution, an award-nominated game famous for its staggering amount of intricacy. Purely from its reputation, I had listed it as one of the top 12 car-themed board games.

Not for the faint of heart, Kanban: Automotive Revolution is an intimidating, intriguing, and ultimately challenging game about the operations of a vehicle factory.

More Game Reviews: You won’t find another stock car racing game as good as this one 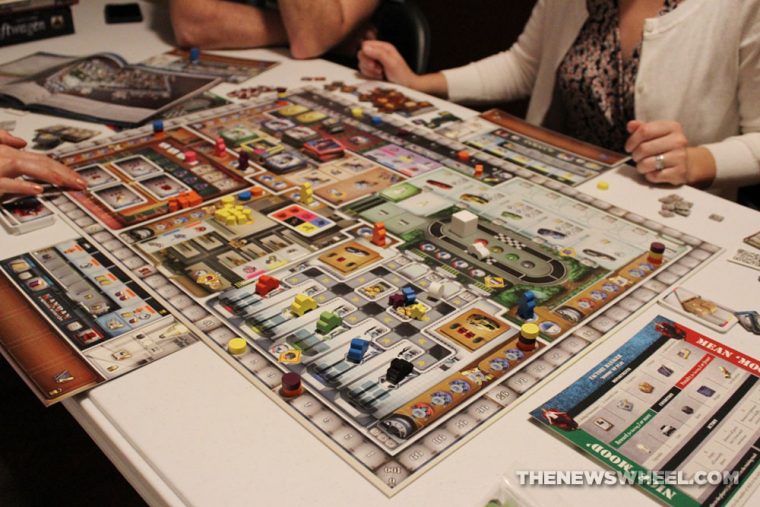 It’s hard to briefly summarize the entire scope of Kanban: Automotive Revolution, but here are the main concepts you need to know to follow along.

Every player is a manager in an automobile factory; each person is ultimately trying to acquire the most notoriety and influence in the company. This is done by completing tasks and impressing the boss, Sandra, who can either be a supportive or demanding leader (your choice).

Throughout the game, players spend their turns in different departments in the factory doing things like gaining certifications to unlock more opportunities later in the game, acquiring blueprints and supplies to build and test cars, and optimizing the operations of departments. Players must budget their time in the work week and account for the factory production cycle to ensure their projects are successful.

At the end of the game, the most successful player (judged by total points) wins. 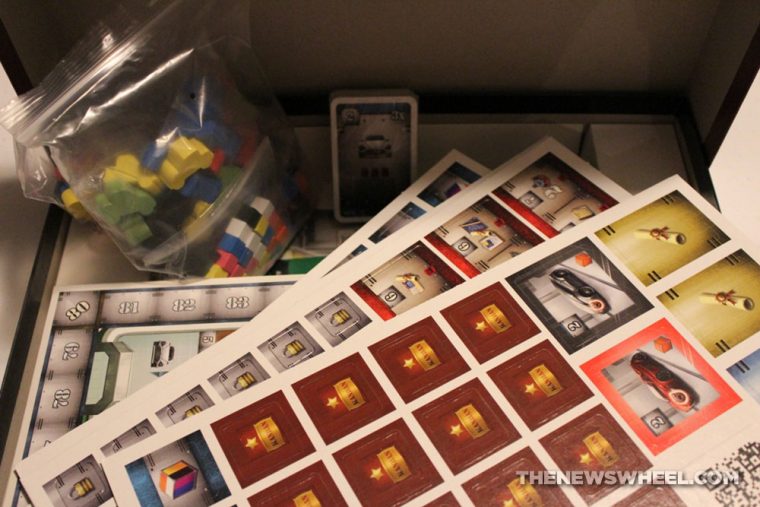 Kanban: Automotive Revolution is packed with over two hundred components, including:

Upon opening the box, you’ll notice that there are a lot of pieces; luckily, everything is carefully packaged and shrink-wrapped, and some baggies are included for the many tokens, cubes, and tiles. Yet for all it contains, it’s not a very big box, and it fits on the shelf nicely without being bulky. It looks attractive too, with a cover and side panels filled with detail and grungy, mechanical style.

For what Kanban is priced at, you definitely get your money’s worth out of it; I’m surprised at its low price considering how many pieces are in it. And all the components–from the wood tokens to the cardboard tiles–are colorful and durable. I don’t expect the pieces to fray, chip, or peel any time soon.

I especially like the organization and design of the main playing board, in which there was clearly a place dedicated for each piece in play; plus, the bold divisions between departments made making sense of the layout of the board much easier. 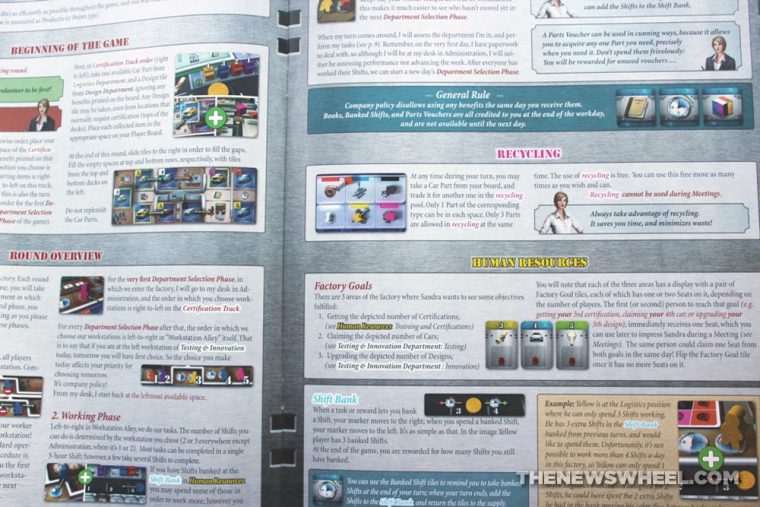 The gamemakers suggest sitting down and reading the 16-page rulebook multiple times thoroughly with the board set up in front of you before actually playing Kanban–and I highly agree. The most challenging aspect of Kanban isn’t playing it but learning and teaching it; with as many interlocking layers as there are to it, this isn’t a game you learn as you play. 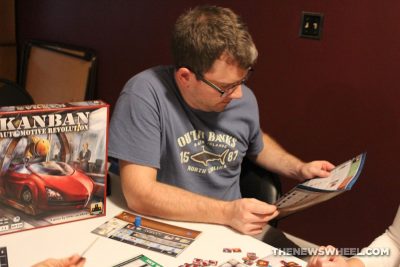 Plus, the rulebook did present some challenges in comprehending it. Despite being organized, detailed, illustrated, and full of clarification tables/examples–which in itself is a lot to digest–certain critical portions are written from the perspective of the boss Sandra rather than directly telling the player what to do. While this is a creative approach to extend the theme of the game into the rulebook itself, it led to some confusion. I checked online and found that I wasn’t the only one having to re-read and re-re-read portions to understand what was being said.

Despite my qualms about the rulebook, there are plenty of aids online out there to make up for it, including from the gamemaker himself. Your best move is to check out forums and watch videos while following along with the rulebook. If you can be taught by someone who knows the game, that’s even better.

Because once you master how Kanban works, you can actually start playing it.

Looking for a Game to Play on Your Next Family Road Trip? We have a recommendation… 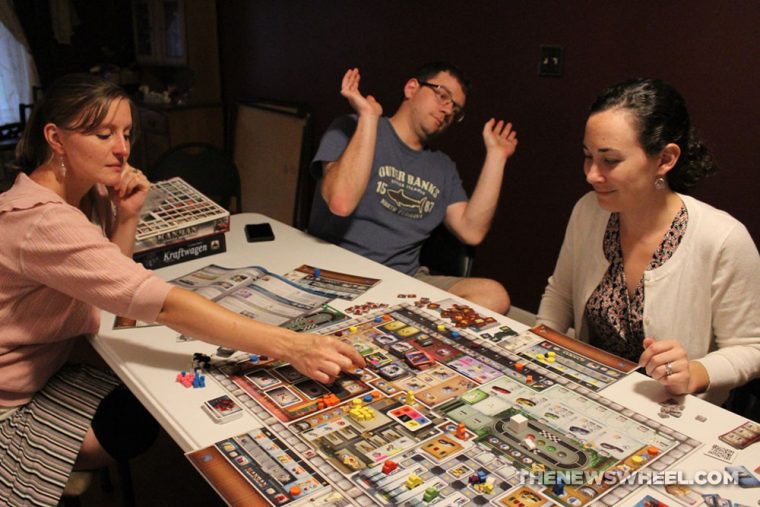 Kanban: Automotive Revolution is more of a simulation experience than what most consider a “game,” and that’s its intent. It took us closer to 3.5 hours with teaching, attempting, consulting the manual, and deciphering scoring; only veterans of the game will be able to conquer it under the two-hour mark. So you have to be committed to mastering Kanban to truly enjoy it.

It’s not a game for those easily frustrated, and that doesn’t just apply to learning the game. Many times, Sandra will come around and foil your plans if you’re not paying attention, or another player will block the department where you need to go. Things don’t reset after rounds or allow you to “catch up” like other games do; you have to possess a clear plan of attack going in and understand the game well enough to alter that plan if things go awry. 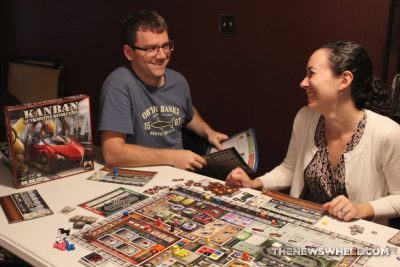 That doesn’t mean that Kanban is meant to be confusing; only complex. Although you may not feel it at first, Kanban gets easier to grasp as the game progresses and as you start seeing the big picture. And that’s the sign of a well-made game.

Rather than being completely abstract in theme and execution, all the steps, processes, and scoring of Kanban make logical sense and build on each other. Chances are, you won’t fully grasp all of the interlocking consequences of each of your actions until much later. Every single choice–and turn–matters. And you won’t figure out the “best way” to do things your first time through.

Yet, as immersed in this automotive factory as you are, it doesn’t always feel like you’re specifically building cars; the product could be substituted with anything that’s similarly produced in an industrial assembly fashion. So to clarify, Kanban isn’t aimed at car-lovers as much as gamers who enjoy highly strategic manufacturing simulation games.

I’ll be honest; Kanban was one of the heaviest games I’ve played, and this is coming from someone who’s spent many weekends growing up around a table of dice and miniatures. While I typically favor more digestible, forgiving, and easily teachable manufacturing games–like the stellar Kraftwagen—I greatly appreciated the challenge of Kanban and will probably return to it when I grow bored of the many imitative, simplistic, recycled game designs out there.

Kanban: Automotive Revolution is available for purchase through the publisher’s website, Amazon, Cool Stuff Inc., Miniature Market, and other retailers.