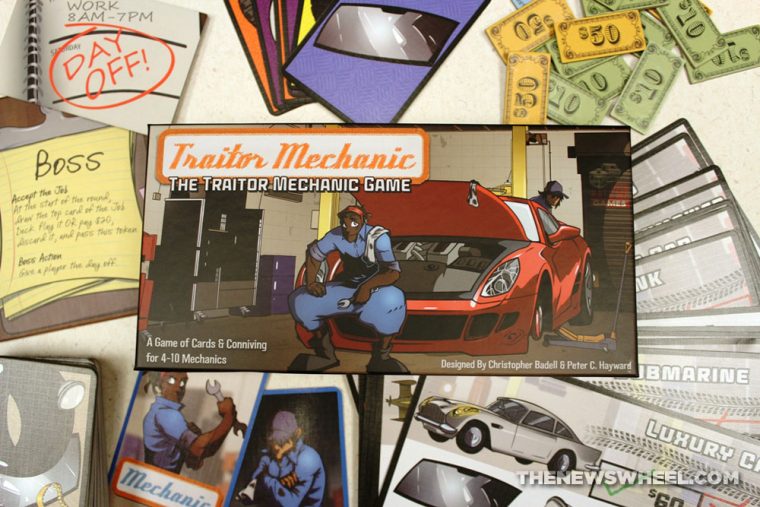 For the past couple years, Dice Hate Me Games has released a handful of “joke games” funded by fans on Kickstarter on April Fool’s Day. These self-referential “Meta Games” humorously poke fun at common traits of today’s card and board games. Among 2016’s releases was Traitor Mechanic: The Traitor Mechanic Game. Named after the game design feature in which some players secretly work to sabotage the work of the group. Except this game actually involves car mechanics.

As a fan of social deduction games like The Resistance and Saboteur, I gladly backed Traitor Mechanic on Kickstarter. When I finally received the game this month, I was pleased to discover that what could’ve been a jokey novelty game was actually quite fun.

Another Winner from Dice Hate Me Games: The resource-moving challenge The Great Heartland Hauling Co. 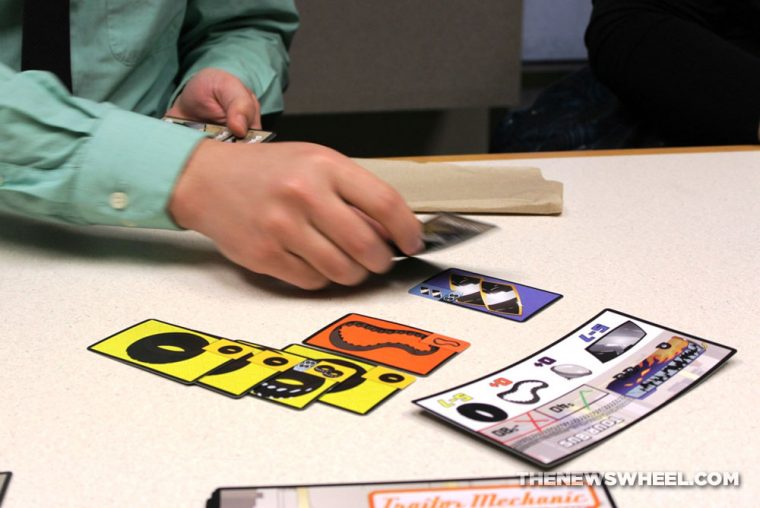 Before the game begins, each player is given a card at-random that secretly determines their role: either a mechanic or a traitor. For 4-6 player games, there is 1 traitor; for 7-10 player games, there are 2 traitors. All are workers at Slim’s Auto Shop.

The game begins with $150 on the table in the shop’s budget and each player holding a handful of parts cards. These parts cards (belts, tires, windows, headlights) will be used to complete repair jobs throughout the game. Successfully-completed jobs will earn the group money toward their total, while failed jobs cost the group money.

Each turn, one player becomes the boss and decides to take the available job or not. If taken, the players each must contribute two face-down parts cards to fulfill the job’s requirements. If the required items are provided as specified, the job is successful. If it is not (due to the traitor secretly playing the wrong cards), the job fails. If a player is suspicious of a fellow player’s loyalty, they may use their turn to blindly discard another player’s cards instead of contributing two more to the job. 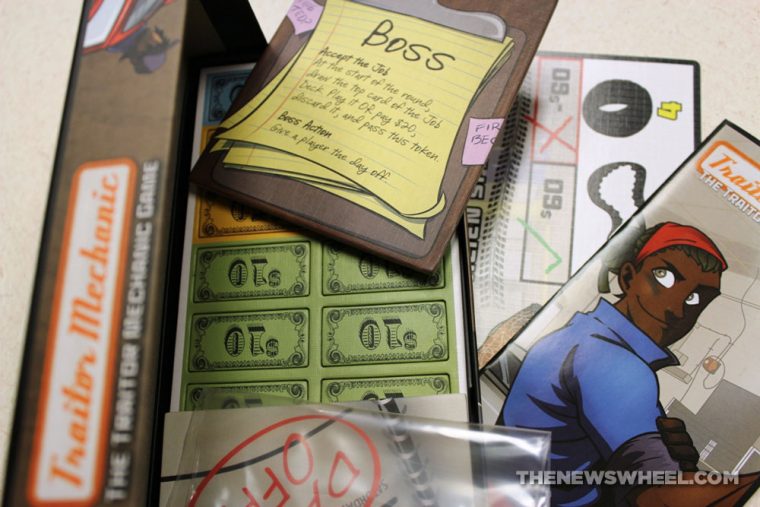 Like most of Dice Hate Me Games’ releases, there area lot of components crammed into a tiny box. Everything does fit in there, but you’ll have to do some shuffling to close the lid. Everything is printed in high-quality gloss finishes on the cards and cardboard tokens. The colors are vivid and the details are sharp.

There’s a lot of creativity in the design details, particularly the title font that looks like a stitched name tag, the Rosie the Riveter reference, and the variety of vehicle jobs (like tour bus, golf cart, lawnmower, and limousine). It would be nice to have a method included to keep track of part card submissions for each player, which some players may find difficult to do purely from memory in large groups. 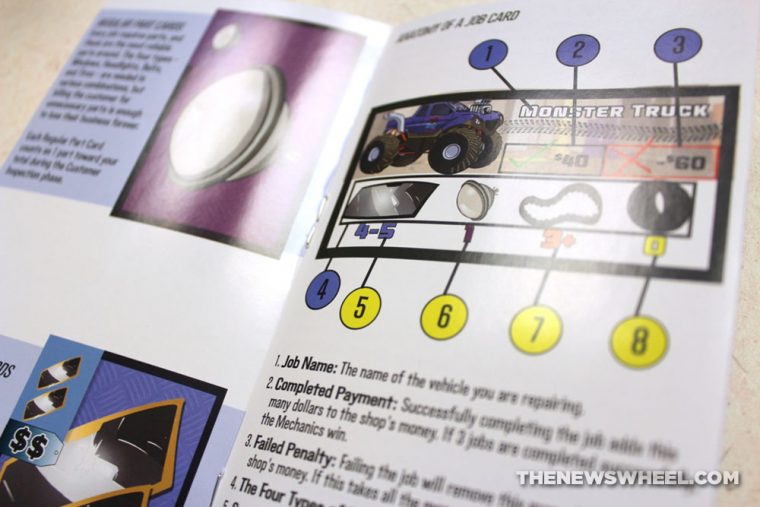 Thanks to streamlined gameplay and well-written instructions, Traitor Mechanic is simple to understand and takes mere minutes to learn. You won’t encounter any grey areas or complicated steps, so you won’t be consulting the pamphlet later. The step-by-step processes and labeled diagrams were especially useful. It’s a cinch to teach large groups, allowing you to wrangle in 10 players with ease. 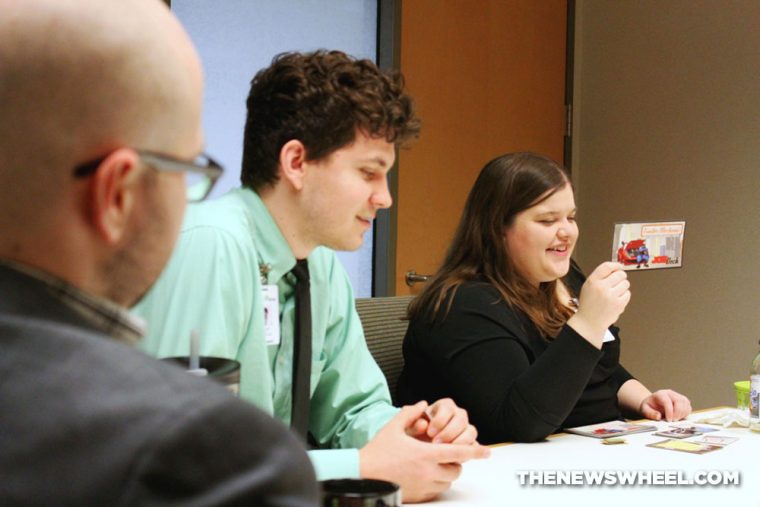 It’s a rarity to find a car-themed game that isn’t motorsports racing or factory production. That’s what first caught my eye about Traitor Mechanic, and it’s follow-through didn’t disappoint. 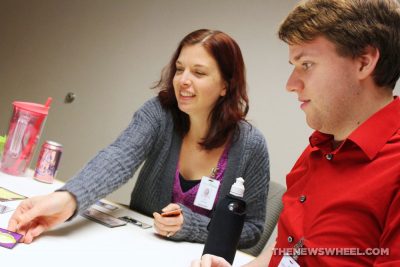 Traitor Mechanic shows evidence that its creators played a lot of social deduction games and whittled them down to their basic qualities that work best. It doesn’t have player elimination (so everyone stays involved), it has an amount of risk in each action, and it encourages conversation and involvement. It didn’t need to be more complex than what it is; it has enough creativity to it to keep it unique each time (like rotating the boss role to give everyone the chance to participate). Even small aspects like drawing more cards and discarding unwanted excess are nice touches.

In the times I played, the mechanics won every time, but I would assert that the game isn’t designed to favor the mechanics but rather requires a traitor who is willing to play hard and fast instead of passively. The challenge of the game is up to the traitor; everyone participates in the conversation, but the outcome heavily depends on what cards the traitor plays when. The game works better when there are two traitors, offering more suspicion and card variance (otherwise traitor identification comes down to quick deduction). I’d recommend distributing the cards so that you don’t know if there are one or two traitors.

If you’re looking for a clever social deduction game that depends on card-laying more than bluffing, Traitor Mechanic is a surprisingly solid option. Its gameplay is fun enough to involve even those who aren’t “gear heads,” and its implementation of an actual “traitor mechanic” theme is quite impressive.

Traitor Mechanic can be purchased through the publisher’s website, Amazon, and other online retailers.