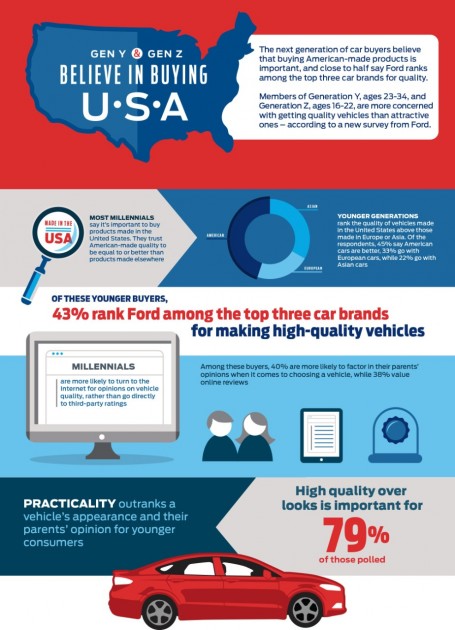 If there’s one thing you can say for Ford, it’s that they really love studies that try to strike at the heart of what makes Gen Y and Gen Z shoppers tick. In March, a MartizCX study found that Gen Z shoppers really like Fords, and another Maritz study from last August confirmed that the same came be said for Millennials.

Now, another study finds that both Gen Y and Gen Z shoppers have something in common: they both prefer American cars.

According to a poll, 72% of Millennial car buyers have no loyalty to the brands that their parents drove. In contrast, 91% said that they trust American-made products are of tantamount or superior quality to products built overseas.

“Globalization and evolving approaches to parenting are triggering significant shifts in both the attitudes and behaviors of young consumers,” said Sheryl Connelly, Ford global consumer trend and futuring manager. “Not only are Millennials more aware of how and where products are made, but parents are empowering them to take greater ownership over purchasing decisions. Both trends are yielding a generation of consumers that thinks much more critically about the source, quality and performance of the cars they drive.”

Another similarity between the different generations: 43% consider Ford to be a top-three brand. Ford is considered the number two in overall quality among those polled who named multiple brands as providers of high-quality vehicles.