The Handmaid’s Tale: June Chases Her Freedom Behind the Wheel of a Classic Chevrolet Camaro 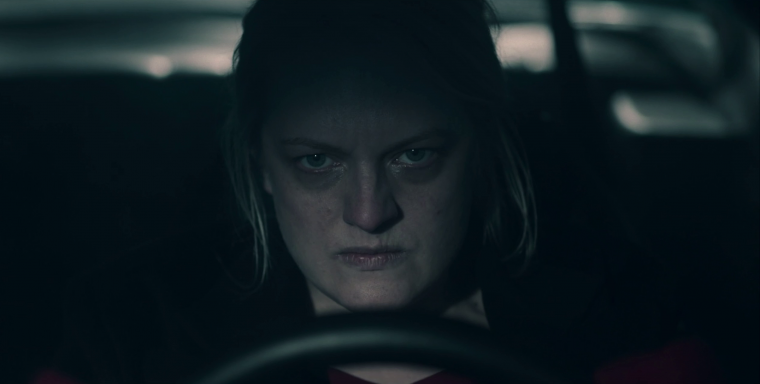 Warning: Spoilers for Season 2, Episode 11 of ‘The Handmaid’s Tale’ below.

For those of you following along with this season of The Handmaid’s Tale, you’ve probably been anxiously waiting for June to make her escape. She made a determined promise to her unborn child earlier in the season that she would not give birth in Gilead.

After being surprised with a visit with her daughter, June was left stranded at an abandoned home while Nick was captured by the Guardians. In a last-ditch search around the property, June happened upon a hopeful miracle: a circa 1975 Chevrolet Camaro with racing stripes abandoned in the detached garage. She went back into the house and, after digging through drawers and cupboards, found the keys.

June let herself into the garage, unlocked the car, and put the key in the ignition. The stereo popped on, with a familiar voice on the radio: Oprah Winfrey.

“The American government in Anchorage today received promises of economic aid from India and China,” she said on the air. “In the United Kingdom, additional sanctions on Gilead were announced as well as plans to raise the cap on American refugees relocating from Canada.”

June’s eyes filled with tears and a smile spread across her face as she heard news from the outside world — the free world. “Now,” the voice continued, “a tune to remind everyone who’s listening — American patriot or Gilead traitor — we are still here. Stars and stripes forever, baby.”

Determined to rediscover her freedom, June went back into the house to pack a bag. After gathering some necessities — and a near-capture by Mr. and Mrs. Waterford — she returned to the car to make her escape. There was only one problem: the garage door wouldn’t open. June decided to channel the power under the Camaro’s hood to ram the door down.

Tips & Tricks: How to store your car in the winter

An unsuccessful charge with the Camaro led June to try a new approach. She grabbed a shovel and made her way outside, trying to dig out the ice and snow to release the door. In a quick moment, June fell to the ground and realized something ironically tragic: her water broke.

Despite having a vehicle, June couldn’t find a way out. This theme has been prevalent throughout the series. While she’s had modes of transportation — planes, trains, cars, and her own two feet— other obstacles have wedged themselves between June and her freedom.