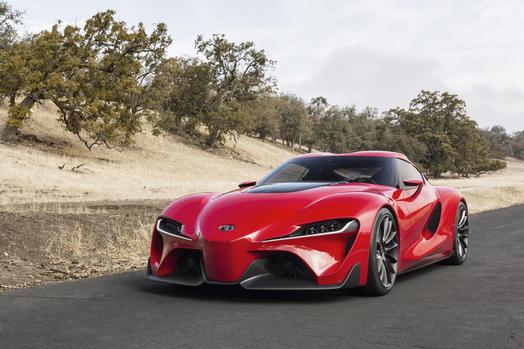 So what is the FT-1? It’s all in the name: FT-1 stands for Future Toyota—and the fact that the brand is number one, of course. (You didn’t expect a brand to call itself number two, now did you?) Hunter was sure to remind us of other Calty sports cars that have been legendary—the 1978 Celica, the Lexus SC400, the Supra, the FT-HS, and the Lexus LF-LC concept—so that we know that the Toyota FT-1 Concept is in good company.

But it was Alex Shen, Calty Design Research Studio Chief Designer, who gave us the real deets on the concept. He explained that the exterior’s key term in the design process was “Function-Sculpting.” By this, he meant that they wanted the outward design to appear as if sculpted by the breeze. At the same time, they designed it to have functional cooling, improving aerodynamic performance. Shen also pointed to the glass window which revealed “the heart and soul of the sports car,” which is the high-output internal combustion engine.

Designers did not overlook the interior design either. Every aspect of the interior design has a purpose, according to Shen. He explained that the slingshot cockpit is meant to immerse the driver in the experience, making him or her one with both the car and the road. With minimalism in mind, Calty placed the “right amount of padding” just in the parts of the car that would come into contact with the driver or passenger. The interior also features a heads-up display (described as “fighter jet inspired”) and steering-wheel controls in a four-quadrant layout.

For more information on the Toyota FT-1 Concept, read the entire press conference transcript at Toyota’s press site, and stay tuned for more NAIAS coverage here at The News Wheel!