Toyota is the Most Googled Car Brand in the World 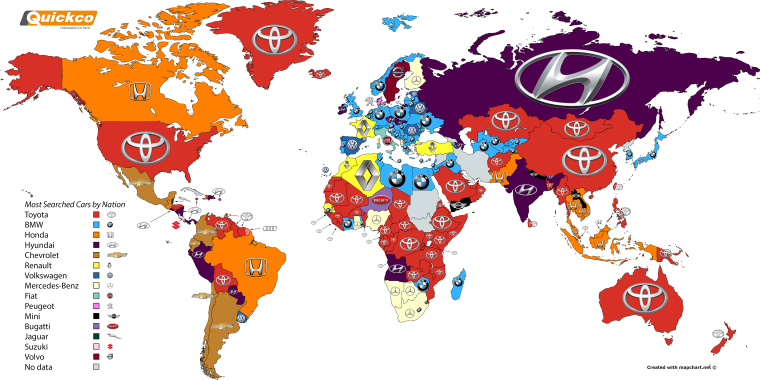 Toyota is locked in a titanic battle with Volkswagen for the title of “world’s best-selling brand” (secured by a narrow margin by the latter for the first time in 2016), but when it comes to the most Googled car brand in the world, the battle wasn’t even close.

Of the 193 countries analyzed by Quickco, Toyota was the most-searched in 74 of them. In second was BMW with 51 countries and in third was Hyundai with 17. Volkswagen lagged behind in seventh, behind Renault and Chevrolet.

Toyota was the most-Googled auto brand in the United States, China, Australia, and many other Asian, African, and South American countries, while BMW led the charge in Europe and Hyundai dominated Russia.

The study should be taken with a grain of salt, as it only looked into Google searches to gather data, and not all countries count Google as their most popular search engine (including China and Russia).

Still, some interesting information can be gleaned from the study. For instance, Quicko’s data showed that automaker popularity wasn’t necessarily associated with country of origin. You’d expect Toyota, Honda, or Nissan to come out on top in Japan, but it was BMW that took the crown there instead. Similarly, you’d expect the patriotic Americans at home to be looking up Ford or Chevrolet, yet it was Toyota that reigned supreme here.

Of the 193 countries, only four had a homegrown brand at the top of their respective search tables: France, with Renault; Germany, with BMW; Sweden, with Volvo; and Italy, with Fiat.