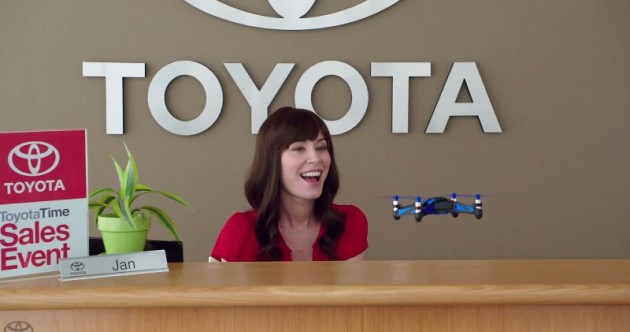 Our favorite automotive celebrity has been busy!

This week, Toyota released five new Toyota Jan commercials. Three of them are advertisements for Toyota Service Centers (which you can watch here) and the other two are for the 2015 Toyota Time Sales Event. In one video, we learn that Jan (played by Laurel Coppock, who you can learn about here) can talk with drones and in the other advertisement…well…she reveals her talent for blowing balloons. Lots of them.

Check out both of the new Toyota Jan commercials below!

Update: Although the following ads have expired on YouTube, you can see more Toyota Jan commercials here and here at any time.

If you’ve ever wondered where Toyota Jan’s allegiance will lie once the robot apocalypse comes, you now have your answer. Not only is she obsessed with automobiles, she also can converse with robots.

In this commercial, entitled “Drone,” Jan is sitting at her desk when she’s visited by a flying blue robot. She proceeds to sell the little machine on the idea of buying a 2015 Prius–assuming drones like the hi-tech features of Toyota’s hybrid.

After laughing at her own pun (one so cheesy you’ll have to see it for yourself), a mother inspecting a Prius on display chastises her son (who’s holding a remote controller) for “messing with Jan.” Shame on that boy for taking advantage of Jan’s tendency to talk to inanimate objects!

To resolve the misunderstanding, apparently the family “trades in” the drone for the Camry, as Jan winds up taking control of the helicopter.

Did you know that Toyota Jan’s really good at blowing balloons? That’s what we learn in Toyota’s 30-second video spot, “Balloon Animal.”

A family of three–who just came from a birthday party–wants to look at the 2015 Camry. As they’re talking with Jan at her desk, the young boy loses grip on his party balloon. In a flash, Jan whips out a long, flaccid balloon and proceeds to blow it up. Before you know it, she reveals a highly-detailed balloon sculpture: the 2015 Camry. After impressing the customers, she reveals she blew up all of the balloons on display!

Jan advertised the Camry back in December for Toyotathon, but this is a much more entertaining commercial. In fact, both commercials are relatively clean, considering the pun “cussing” she did previously, which didn’t go over well with viewers.

Want to relive the days when Toyota Jan was pregnant and eating like crazy? Check out her past commercials! 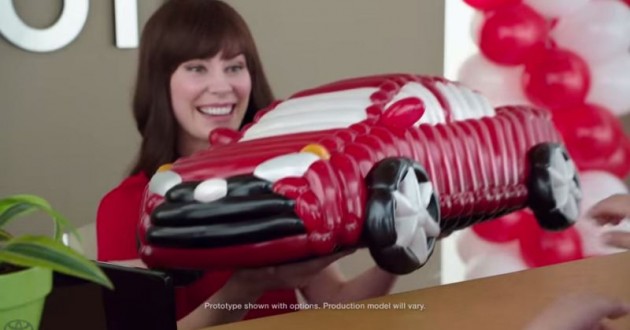