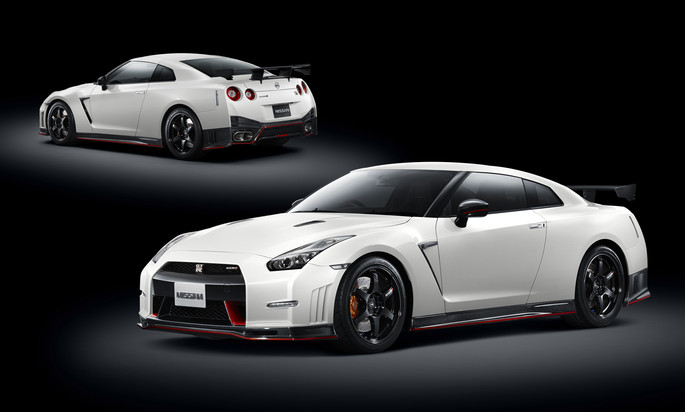 The 2013 Los Angeles Auto Show got a whole lot faster with the official debut of the 2015 Nissan GT-R NISMO—and only half of that had to do with the performance car’s absurd capabilities.  Much of that speed came from the man responsible for its unveiling.

Fred Diaz, Divisional Vice President, Nissan Sales and Marketing, Parts and Service for Nissan North America, took the stage at the LA Convention Center with a distinctive swagger in his step, touting the 2015 Nissan GT-R NISMO’s impressive attributes—600 horsepower, 0-to-60 in 2 seconds, and a positively unruly 7:08.67 Nurburgring lap time.

However, it would not be Diaz alone taking the cover off of the 2015 Nissan GT-R NISMO—he threw co-revealing responsibilities to Nissan’s newly-appointed “Director of Excitement” Usain Bolt.

“I should have waited two seconds,” Bolt was heard saying.  We assume that he was lamenting his choice to purchase the current GT-R model available, which itself is no slouch, over simply waiting to see what Nissan had in store for 2014.  Of course, when you are the fastest human being on the planet, waiting two seconds is just kind of not part of your M.O.

While we can only wonder just what kind of pay a Director of Excitement would net, the perks were pretty clear: Bolt, who already owns a golden GT-R to match his six Olympic gold medals, sounded flabbergasted at the 2015 Nissan GT-R NISMO’s beauty.  He stroked the supercar’s hood lovingly and said, “We will be united soon.”  Diaz reassured him that they would try to put “The World’s Fastest Man” behind the wheel of their Nurburgring-killer as soon as possible.

Not fast enough for the 100m world record-holder: “Right now.”

Before leaving the stage, Bolt was sure to strike a pose in front of his future ride.

“Nissan has always been the brand that did things differently. Our designs have stretched the envelope over the years,” said Diaz in Nissan’s press release.  “All Nissan products, just like the new GT-R NISMO, stand out among the competition because they are about the driver first and foremost and about using innovation to transform the driving experience.”

The 2015 Nissan GT-R NISMO will arrive in mid-2014 and feature a number of advanced features that led Diaz to call it “Godzilla on steroids.”  And how!

For more updates from the LA Auto Show, and for more details on the forthcoming 2015 Nissan GT-R NISMO, keep your eyes on The News Wheel!