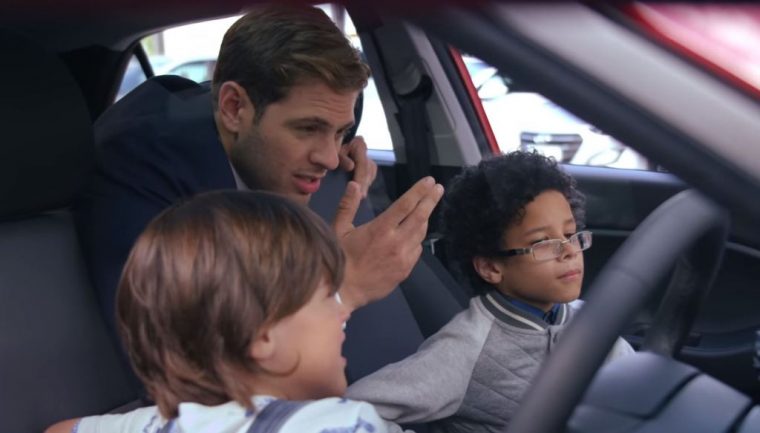 “Cars are for adults.”

That’s not a phrase you’ll hear in Hyundai UK‘s new series of advertisements. In four commercials for the Santa Fe, i20, i40, and Tucson, sales representative Steve gives a Hyundai showroom tour to four special VIPs: Isla, James, Rafferty and Noah.

The surprise is that none of these customers are old enough to have a driver’s license, or are tall enough to see above the steering wheel. These young children are receiving their own, personalized “Kids Car Tours”– and the results are undeniably cute.

WATCH: Get a Kid’s-Eye View of the Latest Hyundai Vehicles

In Hyundai’s “Kids Car Tours” commercials, the features of current European models are spotlighted, such as adjustable heated seats, a sunroof, the stereo system, and remote key (mostly Premium trim add-ons). In the process, there’s a culture clash between the no-nonsense children and the business-minded salesman.

The set-up is staged but the results are entertaining, especially since the kids’ charm is quite genuine. Their reactions and comments are immediately made twice as funny because of their British accents.

While the pitch is silly and chuckle-inducing, the message of the commercials is clear: when it comes down to it, mumbo jumbo about a car’s specs mean nothing to customers compared to actually experiencing the vehicle. That blank stare the kids get when they’re inundated with industry jargon is the same look most of us adults get when we’re approached by a car salesman. Today’s buyers–and the next generation–care about actually using the vehicle and its features. So if the car’s cool enough, it will practically sell itself.

You can watch all the videos on Hyundai UK’s YouTube channel.