Warning: this video is not for the particularly squeamish, but is actually quite incredible. In it, a 1955 Chevy takes on a second-generation Camaro on the drag strip. At the end of the drag race, however, the driver of the ’55 Chevrolet somehow loses control of his vehicle and sends it spiraling down the raceway. 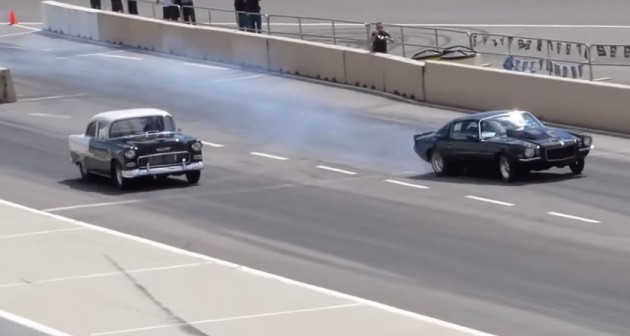 A 1955 Chevy faces off against a second-gen Camaro in a drag race with a not-so-happy ending.

Reportedly, the driver was only wearing a lap belt, which didn’t survive the crash. The lack of any safety belt caused the driver to be thrown through the windshield, legs first. After the car’s momentum stops, fans in the crowd realize that the driver’s legs are dangling out of the now shattered windshield.

Miraculously, however, the driver pulls himself back into the cabin and exits through the driver’s side door with nothing more than a limp (and probably a whole lot of embarrassment).

Check out the intense 1955 Chevy drag racing crash below (the action starts at 1:04)—and thank your lucky stars no one was seriously injured.