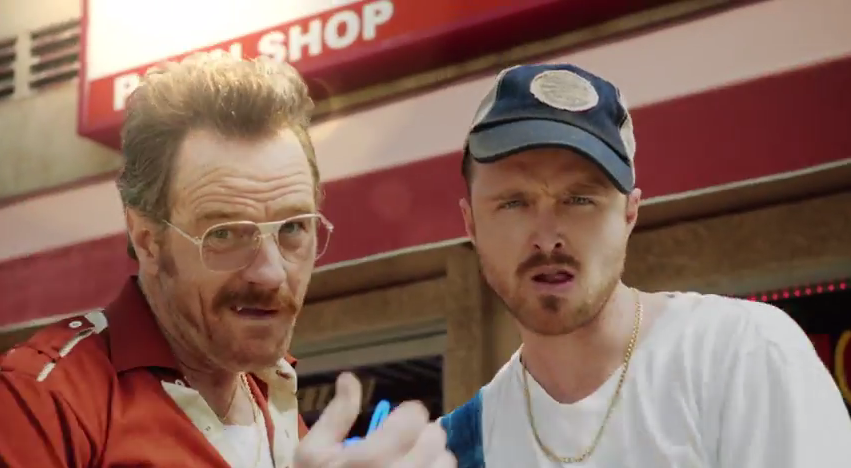 Jesse and Mr. White are together again for the Barely Legal Pawn short

Audi returns this year to the leading role of Official Automotive Sponsor for the 66th Emmy Awards, which will air Monday, August 25 at 8pm EDT on NBC. Part of the walkup to the biggest night in television began on Monday with the launch of three promotional spots in the #OffScript campaign, which stars Fred Armisen and features cameos by Krysten Ritter, JB Smoove, and Norm McDonald. It’s Fred Armisen, so you know you’re getting a good deal of funny.

But we aren’t here to talk about those particular videos, for as funny as they are of their own merits. We are here to talk about Barely Legal Pawn (below), a short featuring the Audi S3 and starring Breaking Bad buddies Bryan Cranston and Aaron Paul and Veep’s Julia Louis-Dreyfus.

Julia Louis-Dreyfus (herself) and her Emmy

Here’s the long and short: Cranston and Paul play Buzz and Randy Jackson, owners and proprietors of the Barely Legal Pawn Shop, which seems to be the focus of some kind of reality show (wonder where that idea came from). Julia Louis-Dreyfus, who happens to also be the proud owner of the Audi S3, comes in to sell her Emmy for Best Supporting Actress from her stint on Seinfeld in order to buy herself a private island (because Celine has one, of course).

Hijinks ensue from there. Randy confuses Julia with Mary-Louise Parker from Weeds, there’s some playful banter about whether drama or comedy are harder to pull off, and the whole thing resolves with a reference to a particular show in which Cranston and Paul both starred. And no, we’re not talking about some weird combination of Mighty Morphin’ Power Rangers and The Price is Right.

So, yeah. If you didn’t watch it and you are still reading this, then stop what you’re doing and watch it already.