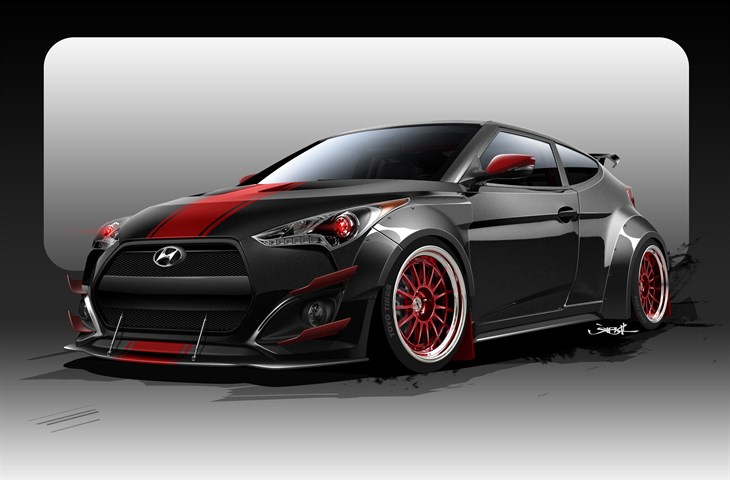 Hyundai has been busy building its roster for the 2015 SEMA Show, the famed convention bringing automobile tuners from across the globe to Las Vegas. Already it’s announced a special Tucson from Bisimoto Engineering and a Genesis Coupe from ARK Performance. Blood Type Racing, Inc wanted in on that action and has something sinister up its sleeve.

Last year, BTR offered a devilish red 1,000-horsepower Genesis Coupe for spectators to the 2014 SEMA Show to witness. This year, BTR set its sights on another sporty Hyundai model: the Veloster Turbo.

Modifications to the Veloster Turbo at SEMA 2015

“The focus of this build was to boost the performance capabilities of the Veloster R-Spec while creating one of the angriest-looking Hyundai vehicles to chew up the pavement,” stated Sam Lee, Director of Marketing of BTR. “This Veloster is guaranteed to turn heads on the SEMA show floor.”

Those are just a fraction of the impressive amount, range, and quality of upgrades received by the black-and-red Veloster appearing at SEMA 2015.