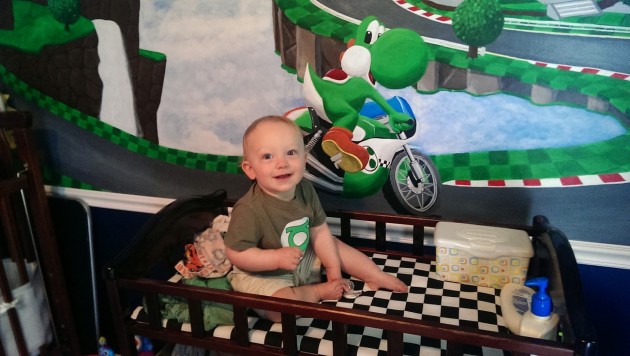 Baby Grant enjoys the awesome fruits of his father’s labor

The title of “World’s Greatest Dad” is a hotly contested honor. There are a lot of fathers out there with coffee mugs or t-shirts that declare a right to the crown, yet many are mere pretenders to the throne.

But reddit user troymcklure (real name Wes) may just be the genuine thing. Why? Because Wes spent a year and a half building his infant son Grant an incredibly elaborate Mario Kart-themed nursery, and it’s amazing. 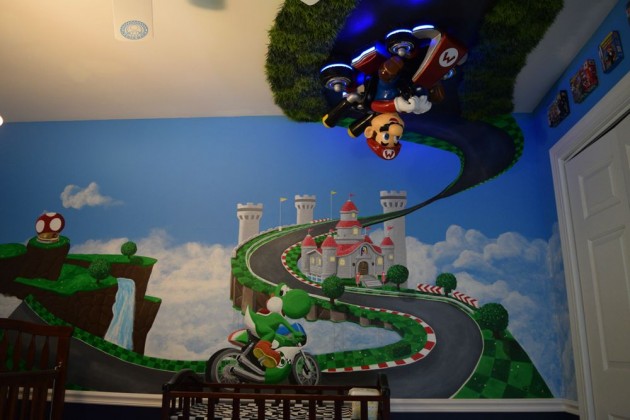 Wes, who refers to his nerdy DIY projects as “geeksmithing,” had previously built a Yoshi’s Island nursery for his daughter and a Legend of Zelda nursery for a friend’s baby boy. In October of 2013, when Wes found out that he and his wife were going to have a second child, he knew he needed to “up the ante” for his next gamer nursery.

“A Paper Mario room was out, as another guy just made a fantastic one a few months prior,” Wes said. “After searching online a while, there didn’t seem to be any big attempts at a Mario Kart nursery out there, and with the newest version coming out, Mario Kart 8, it sparked my interest.”

Despite having no formal training in the field of visual effects, Wes pulled off a remarkably ambitious foam-and-silicone sculpture of Mario riding a Kart with glowing LED-light tires—which he then hung from the ceiling! Wes also painted the gorgeous mural of a racetrack running through Princess Peach’s castle, and put together a crib mobile of Mario Kart racing characters, being held by a cloud-surfing Lakitu. 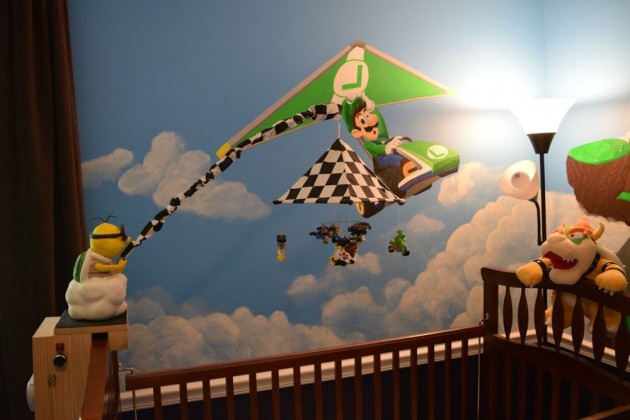 You can read Wes’ full description of the lengthy build process on his website, and check out more pictures on Imgur.

So, what if Wes’ son Grant grows up to be more of a SEGA kid than a Nintendo kid? Well, we suppose Wes can always kick him out and convert the nursery into his own gaming room.