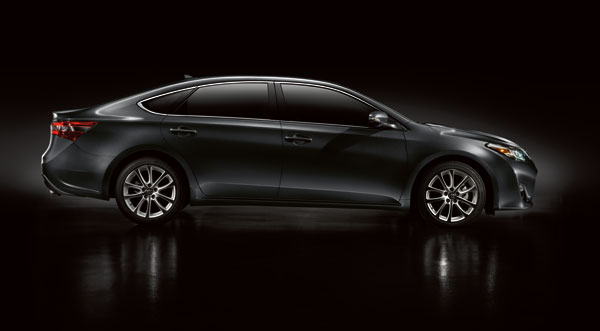 What’s New for the 2013 Toyota Avalon

Toyota has completely redesigned the Avalon for the 2013 model year. A revamped exterior and interior make the 2013 Avalon more eye-catching than ever before, while an increase in trunk size make trips away a breeze. The 2013 Avalon also adds increased efficiency, and the option of a hybrid model that will check many drivers’ boxes and then some.

From the moment you see the 2013 Toyota Avalon, you’ll feel like you’re staring at a luxurious (read, expensive) vehicle. The Avalon might be a looker, but it’s affordable one that makes your typical luxury German sedan shy into the background.  The first thing you’ll notice is the Avalon’s new grille, which is lower and wider, making the car’s front end stand out. The new design is more streamlined, leading the eyes from the strong roof to the sizeable trunk in one sleek motion. To finish it off, the Avalon’s rear LED taillights push their way onto the trunk lid, and a chrome strip ties them together for a look that’s polished and refined.

The 2013 Toyota Avalon is offered with one traditional engine choice—a 3.5-liter V6 whopper that delivers an impressive 268 horsepower and 248 lb-ft of torque. This powerful engine is mated to a six-speed automatic transmission that helps the sedan glide smoothly down the road, shifting so that you barely notice. The front-wheel drive sedan packs enough power to ensure you’ll have an exciting ride, which is something you don’t normally expect from a larger sedan.

The Avalon’s 3.5-liter gasoline engine offers 21 mpg city and 31 mpg highway, according to EPA estimates. That’s slightly better than last year, and definitely impressive for a family sedan. If you need something a tad more efficient, the 2013 Toyota Avalon Hybrid gets an incredible 40/39 mpg city/highway—a plus for busy families who want a larger, more luxurious car but don’t want to spend every other day filling up.

Inside the 2013 Toyota Avalon, you’ll find a completely new design built using quality materials that create an elegant finish. Chrome glints on the dashboard and throughout the interior, while the Avalon’s front seats provide a plethora of comfort and maneuverability so both driver and passenger can get comfy with relative ease. Unlike many cars that come with cramped back seats, the 2013 Avalon’s back seats have so much legroom, a basketball player could quite comfortably fit back there with no complaints. The trunk offers a humungous 16 cubic feet of space—more than enough for anything you care to store back there.

As with all Toyota models, safety is of the utmost importance in the 2013 Toyota Avalon. A comprehensive suite of airbags includes front and rear side airbags, side curtain airbags, and front knee airbags. The Avalon also comes with antilock disc brakes, traction control, and stability control—and drivers who whose the Touring and Limited trim levels can take advantage of blind-spot monitoring and rear cross-traffic alert. It’s these features among others that earned the 2013 Toyota Avalon an overall 5-star safety rating from the NHTSA, and a Top Safety Pick rating from the IIHS.