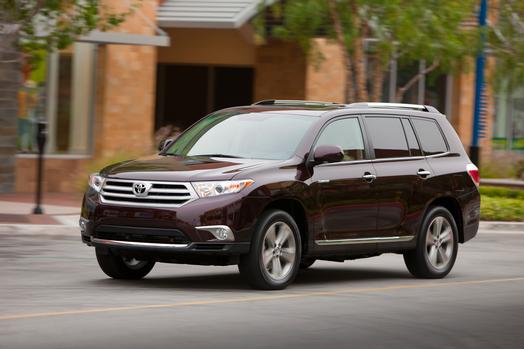 What’s New for the 2013 Toyota Highlander?

Although the 2013 Toyota Highlander carries over from the 2012 model year with relatively few changes, it does see the debut of a new trim level (“Plus”), as well as a few minor changes to standard equipment.

The 2013 Toyota Highlander looks like an SUV, but offers much more versatility than your typical large vehicle. Outside, clean lines and details give the Highlander a classically handsome feel. Unlike other crossovers in its class, the Highlander doesn’t go all-out with ruggedness, but that makes it more appealing to drivers who want to use it for everyday needs or who prefer their vehicles with a more luxurious feel.

When picking out your 2013 Toyota Highlander, you’ll have a choice between two engines. The 2.7-liter four-cylinder motor is available on the base model, and produces 187 horsepower and 186 pound-feet of torque. Nothing to write home about, but more than enough for everyday commuting needs. A second engine—a 3.5-liter V6 with 270 hp and 248 lb-ft of torque—is available on all trim levels, and also allows you the choice between front-wheel and all-wheel drive. When properly equipped, a Highlander with the V6 engine can tow up to 5,000 pounds.

Compared to your typical family vehicle, the 2013 Toyota Highlander’s fuel economy ratings are fairly standard. The 4-cylinder engine returns an EPA-estimated 20 mpg city/25 mpg highway, and 22 mpg combined. Choosing the V6 with front-wheel drive will get you 18/24/20 mpg city/highway/combined, while opting for the all-wheel drive version will lower those ratings slightly to 17/22/19.

The inside of the 2013 Toyota Highlander is comfortable and user-friendly, with plenty of storage and passenger room. The Highlander has three rows of seats and can fit a total of seven passengers. The second-row seat can move fore and aft, making passage to the third row a cinch, as well as maximizing passenger space. A standard 6-speaker audio system makes for entertaining journeys, and Toyota offers a rear-seat DVD entertainment system to keep your family occupied while on the road.

Each 2013 Toyota Highlander comes with a vast array of airbags, including front-seat side-impact airbags, full-length side-curtain airbags, and a driver-side knee airbag. When tested by the National Highway Transport Safety Administration, the 2013 Toyota Highlander received four out of a possible five stars for its performance in crash testing, while the crossover earned the highest possible rating of “Good” from the Insurance Institute for Highway Safety in roof-strength, frontal-offset, and side-impact testing.