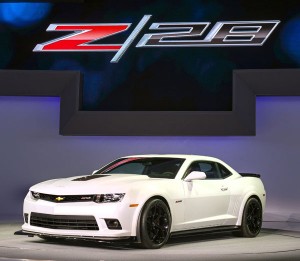 Chevrolet took the 2014 Camaro Z/28 to Nurburgring—in the rain!—and came out a conqueror. The Camaro finishes the 12.9 mile lap in a zippy 7:37:47, which puts it ahead of several other major marquee sports cars. The Z/28 also beat out its sister vehicle, the Camaro ZL1, which clocked in at 7:41.

Chevrolet is rather stoked about the Z/28—the press release announcing it ran under the title “A Legend Returns.” This legend adds to its legacy with its impressive showing at Nurburgring. The 2014 Z/28 pumps out 505 horsepower from a 7.0L V6 engine. However, the engine is only part of the equation.

A Fox News article highlighted that the real reasons for the Z/28’s success and speed are  “a reengineering and weight saving program that stiffens its chassis, strips it of heavy sound deadening material, uses thinner glass on the rear window, puts air conditioning on the options list and eliminates all but one speaker for the audio system.”

Impressed by the 2014 Camaro Z/28 at Nurburgring? Even though prices have not been released yet, we do know that the Z/28 will go on sale in early 2014. You don’t have that long to wait!