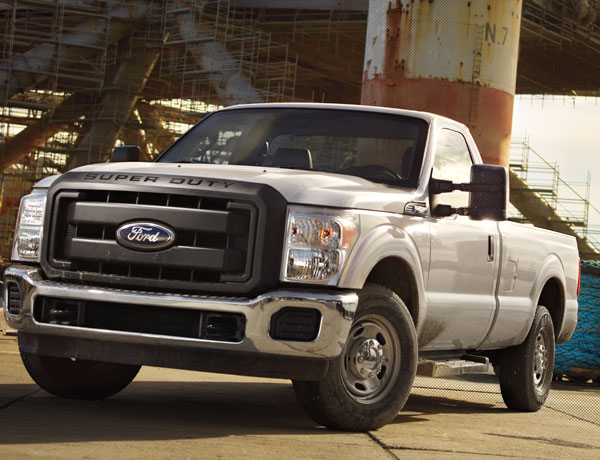 The Ford Super Duty is considered to be the most durable and powerful truck in the country.

If the car industry were a gym, the 2014 Ford F-Series Super Duty pickups would be the body builders putting everyone to shame. Sometimes, you just need a truck with a ton of power and, with its muscular lines and dominant front grille that practically shouts, “I am man, hear me roar!” there’s no denying the Ford Super Duty pickup is just the truck for the job. Available in three different cab styles—two-door regular cab, the four-door extended SuperCab, or the four-door crew cab—there’s an option for everyone, regardless of the work that the Super Duty is needed for.

There are two engine options for the 2014 Ford F-Series Super Duty—a 6.2-liter gasoline V8 engine that churns out 385 horsepower and 405 lb-ft of torque or the optional 6.7-liter diesel-powered V8 that gets a bit more power with 400 hp and 800 lb-ft of torque. Each engine comes with a standard six-speed automatic transmission with the option of either rear- or four-wheel-drive systems. The diesel engine can tow up to 14,000 when properly equipped.

Both engines were built for optimal performance and fuel economy with the 6.2-liter gasoline V8 coming in at around 15 mpg combined while producing enough power to tow whatever you might need.

Durability dominates in the Super Duty series’ interior with hard plastics featured in the lower trim levels and a plethora of storage and utility options in the F-250, providing plenty of places to put whatever you might need. Under both the front bench seat and the rear seat are lockable bins, while the available 40/console/40 front bench configuration includes enough room to put a laptop, hangingfiles, and other office-style items.