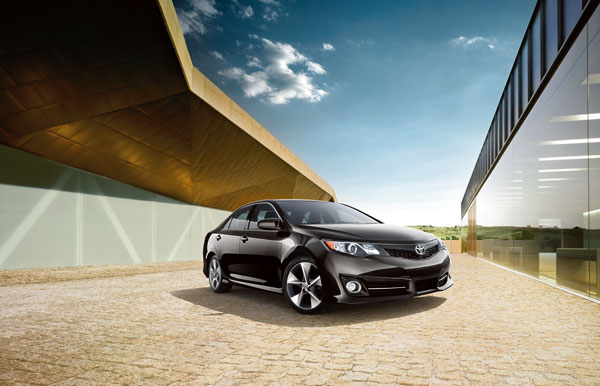 The 2014 Toyota Camry Hybrid returns unchanged, though Toyota is expected to introduce a midyear update, which they call “2014.5 Camry Hybrid”. This update will include a standard rearview camera and a change in the car’s infotainment system’s name.

For the 2014 model year, Toyota took the sedan we all know (and love) and made it even sexier. With the hybrid powertrain comes sleek lines and subtle curves throughout the 2014 Camry Hybrid’s body that creates an aerodynamic silhouette, allowing the car to receive optimal fuel economy. The elegantly designed front fascia adds a touch of elegance to the sedan, while the sharply styled rear end makes sure you don’t forget the hybrid.

For its hybrid power, the 2014 Camry Hybrid combines a 2.5-liter four-cylinder engine, which is capable of laying down 156 hp, with an electric motor and battery pack. The car is capable of being propelled by the electric motor alone at low speeds, making it extremely fuel-efficient. When the engine and motor work together though, it can crank out up to 200 hp, while a continuously variable transmission (CVT) brings power to the front wheels. 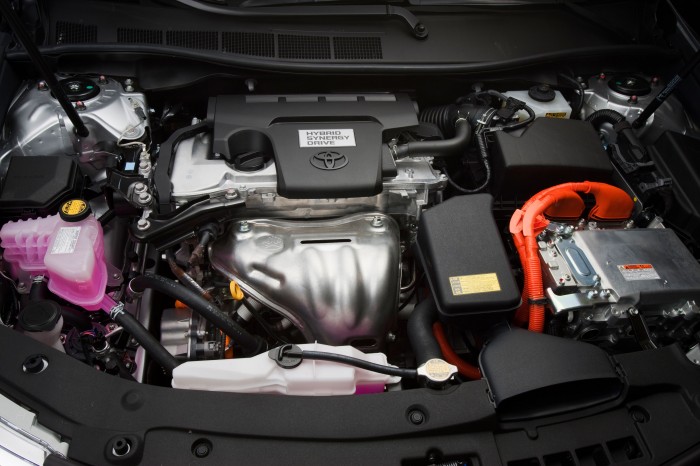 According to the EPA, the Camry Hybrid is rated at 41 mpg combined for fuel economy.

A spacious interior, both in the front and back seat, creates a comfortable atmosphere within the Camry Hybrid’s cabin, which is added to by the sleek dash design. An upgraded audio system includes Entune, which is a collection of smartphone-connected services, including features such as the Bing search engine, Pandora streaming radio, and much more.

While the Camry Hybrid hasn’t undergone the crash test gauntlet, the non-hybrid Camry has, receiving a five out of five possible stars rating in government crash testing for overall crashworthiness. The Insurance Institute for Highway Safety also named the non-hybrid Camry a Top Safety Pick. Antilock brakes, stability and traction control, a rearview camera, front- and rear-seat side airbags, side curtain airbags, and knee airbags are all standard features, while the XLE trim level comes with a blind-spot monitoring system.