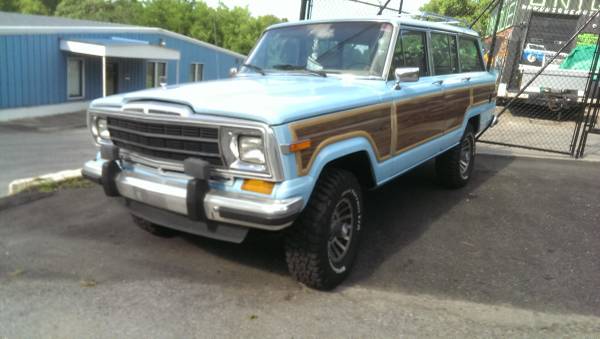 The future Grand Wagoneer is going to be Jeep’s most luxurious model yet
Photo: Sistiana via Craigslist

When we first heard that Jeep is bringing back the iconic Grand Wagoneer, we couldn’t help but get excited. After all, this wood-paneled wagon is one of the most well-known vehicles in Jeep’s history. But when Jeep started talking about the Jeep Grand Wagoneer becoming its top luxury SUV, we got a bit confused. How can a vehicle known for its wood paneling go from redneck-chic to opulent?

By giving it a price tag that could potentially reach $140,000, of course.

Jeep is planning on using the Jeep Grand Wagoneer to break into the premium SUV segment, which is currently occupied by vehicles like the Range Rover, Porsche Cayenne, and BMW X5 in Europe. Because it wants to compete with such classy models, it only makes sense that its price tag will reflect that.

During the 2016 Paris Motor Show, Jeep head Mike Manley outlined the brand’s plan to bring back to the Grand Wagoneer as a range-topping model. Speaking to Auto Express, he stated, “I don’t think there’s a maximum price ceiling per se for Jeep. If you look at the upper end of the segment in the US, for me, the Grand Wagoneer done well can compete all the way through this segment.

Currently, Jeep’s most expensive vehicle is the Jeep Grand Cherokee SRT, which starts at a bit over $65,000. If the American carmaker wants to justify having such a large price tag, it’s likely it will offer a host of new, exciting technologies and some pretty awesome standard features.

Rumor has it that the Grand Wagoneer will actually be sharing some parts with the Maserati Levante. If that’s the case, then we can definitely see how this icon’s price tag could reach six figures so quickly. It’s still set to arrive in the 2018 model year, so keep an eye out for a pricing announcement closer to that time.