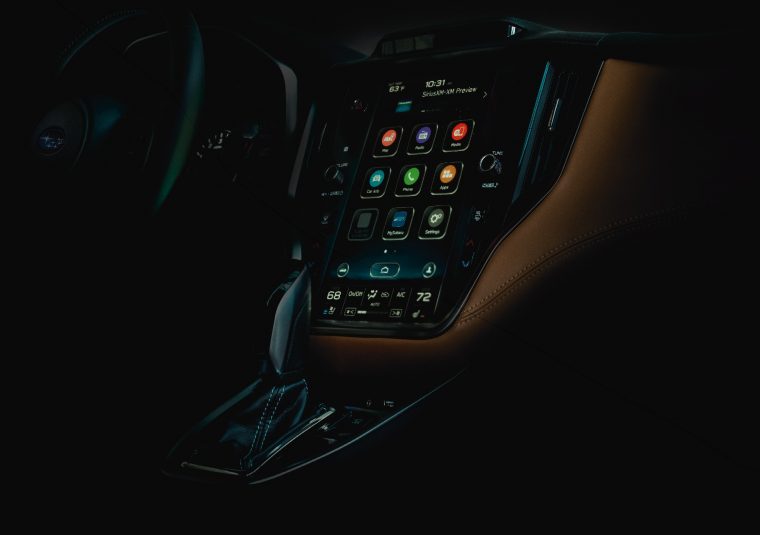 We already know that the 2020 Subaru Legacy is going to get a complete redesign and will be revealed at the 2019 Chicago Auto Show.

Subaru gave us a little teaser of what’s to come with a shadowy photo of the Legacy’s exterior, which doesn’t reveal much beyond the LED daytime running lights that border the entire outside of the headlights.

The pictures of the 2020 Legacy interior gave us a lot more to work with. The Starlink infotainment system is making a comeback with a huge screen, but Subaru isn’t going with a bigger horizontal display like many other manufacturers.

This giant screen is vertical; a portrait of buttons that takes up the entire center console. Most of these buttons are digital, but the remnants of some physical buttons,  like the volume control knobs, remain. You can clearly spot a USB port along with an auxiliary port, which isn’t surprising.

Once again, since the picture is covered in shadow we can’t get a better glimpse of the inside. There is just enough light on the dapper brown leather trim covering the dashboard, which you could easily mistake for the inside of a luxury model.

There’s some sort of additional display/device that sticks out above the dash and right over the giant infotainment display. The slight sheen of light on the glossy black material indicates that it’s some piece of technology and probably not a fashion statement, though what it could be is anyone’s guess.

Tire Smarts: Learn the basics of tires, how to save, and some tips to take care of them so they last longer

We’ll have to wait to see more during the Chicago Auto Show coming up. Alongside the S209 announcement, Subaru is revving up the beginning of 2019 with some fun announcements.