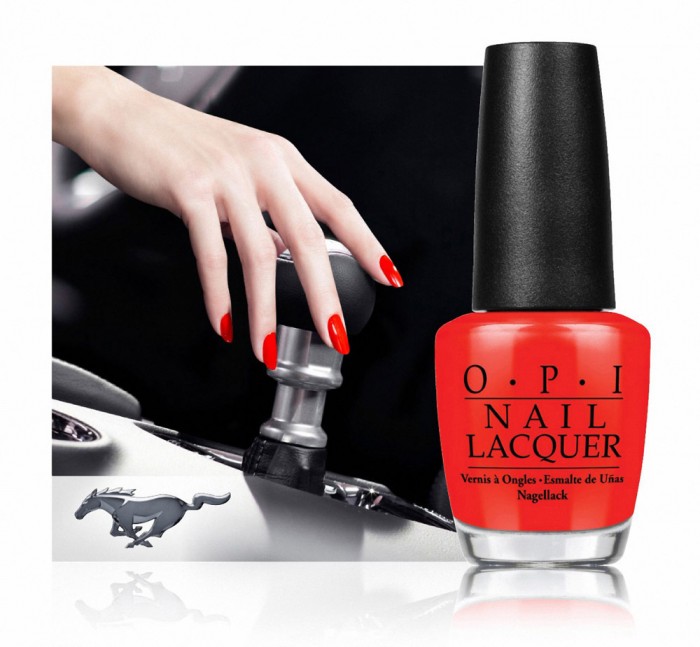 Ford has a big celebration to look forward to this year as the Mustang is about to become a member of an incredibly exclusive club – vehicles that have been in production for over 50 years.  As part of the anniversary celebration, Ford has partnered with OPI to create a line of limited edition nail lacquers that will launch across the world in July.

Related: The 2015 Ford Mustang Convertible Takes to the Big Apple

“OPI is thrilled to partner with one of the world’s top automotive companies in celebrating 50 years of Ford Mustang,” said Suzi Weiss-Fischmann, OPI co-founder and executive vice president. “For women, cars and nail lacquer offer a way to express personality. This new collection will deliver elements of sophistication, luxury, power and style fitting for both OPI and Mustang consumers.”

The Ford Mustang nail polish line will be an expression of the Mustang’s bold personality and iconic spirit. According to a Ford news release, the collection’s hero shade will be Race Red, and will be a tribute to one of Mustang’s most iconic colors.

The Mustang’s combination of style, performance, and affordability have helped it gain popularity worldwide, selling more than 9.2 million in its 50 years and appearing in film and television 3,000 times. We think that’s reason enough to celebrate – and we can’t wait to get our hands on the line of Ford Mustang nail polish… or rather, the nail polish on our hands.