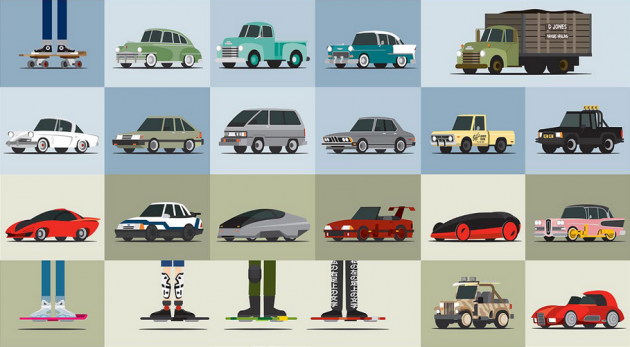 From the manure truck to the hoverboard, every vehicle from the Back to the Future franchise is on display

We’re just eight months away from October 21, 2015—the date that Doc Brown, Marty McFly, and Elisabeth Shue (God, can never remember her character’s name…) flew their time-traveling DeLorean to in 1989’s Back to the Future Part II. Although the year 2015 hasn’t yet produced the flying cars or hoverboards we were promised, it has cranked out some pretty awesome BttF merchandise, from that Japanese DeLorean iPhone case to this awesome poster from Scott Park, entitled “88 Miles Per Hour.” 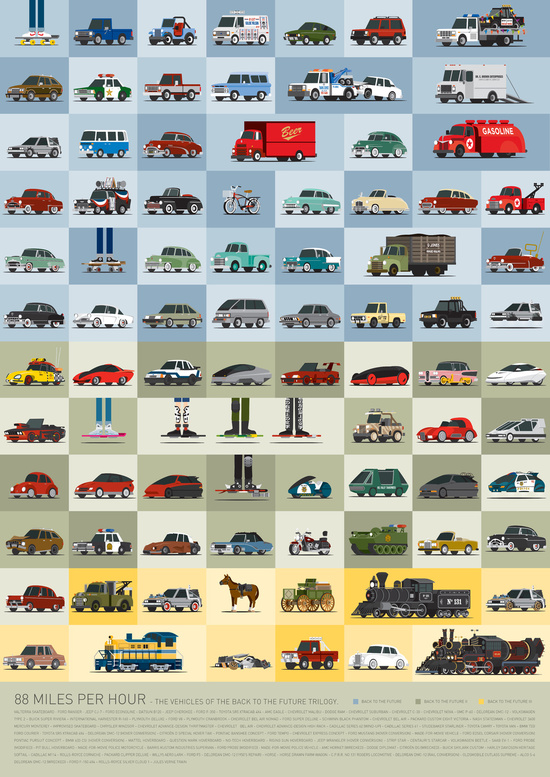 88 mph, of course, is the speed at which you’re gonna see some serious shit Doc’s heavily modified DeLorean can travel through time. A 13”x18” canvas print of this work of art can be yours for the price of $85. (Come on, Scott, you couldn’t bump the price up three bucks for the sake of thematic consistency?)

Scott Park—who has made similar posters of famous movie and television vehicles—explained his artistic inspiration:

Since this year is the 30th anniversary of Back to the Future (and the “future” from the second movie), I decided on a BTTF theme.

I was showing the movies to kids over the summer and of course I was paying attention to all of the cars. And I realized “Wow, there’s a lot of cars in these movies. I bet I could do a poster with all of these cars”

So a few months, and multiple viewings of the movies later, I present 88 Miles per Hour – The vehicles of the Back to the Future Trilogy.

88 vehicles, across all three movies. From Marty’s skateboard to Doc’s Time Train. All in order of their appearance in the movies.

I’m that level of crazy apparently.

Yes, yes you are… and the world is a better place for it.