Oftentimes, people cite National Lampoon’s Vacation as the quintessential road trip film, and while it has its merits, it has entirely too much Chevy Chase for my liking. Thelma & Louise, however, is an absolutely phenomenal road trip film with the perfect amount of Chevy Chase. While it may not be quintessential, it’s still one of the most thrilling road trip movies I’ve ever seen, and it features Brad Pitt and Brad Pitt’s butt at their most endearing. 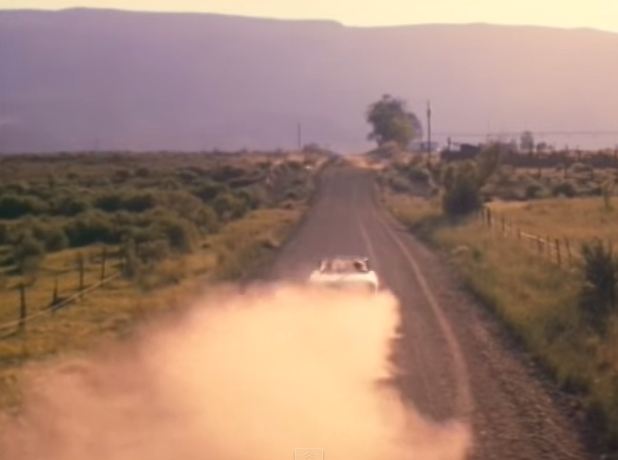 The story takes us on a road trip with Louise Sawyer (Susan Sarandon), a tough and very Type A waitress; and her best friend, Thelma Dickinson (Geena Davis), who is married to an incredibly controlling and dominant husband, Darryl (Christopher McDonald). The two are planning to stay at a friend’s cabin in the mountains and head out in Louise’s 1966 Ford Thunderbird convertible, without telling Darryl. They’ve packed the car with all they’ll need, including a gun, which Thelma brings on a whim. 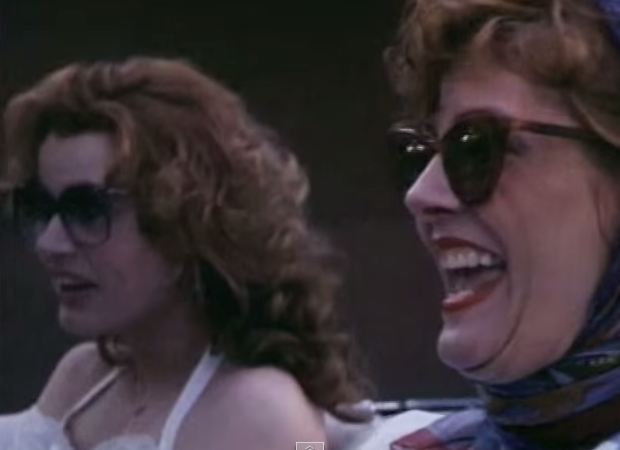 Thelma and Louise laugh about leaving their lives behind on their vacation.Pathé Entertainment/YouTube

Tragedy strikes, however, when Thelma, who is not used to being let out of her cage by her asshat husband, gets drunk at a country bar and becomes too friendly with a man named Harlan (Timothy Carhart), who takes her out into the parking lot and attempts to rape her. He is stopped, however, when Louise shows up with the gun. Just as they are walking away, Harlan says something offensive, so Louise turns and shoots him dead on the spot.

The girls realize their mistake (as Thelma was too drunk for anyone to believe that Harlan had tried to rape her) and flee the scene, ultimately deciding to abandon their lives and head for Mexico from Oklahoma. The only catch? Louise refuses to drive through Texas because of something that happened there years before.

Along the way, Thelma convinces Louise to pick up a hitchhiker named J.D. (Brad Pitt), who is charming but incredibly short because, well, Brad Pitt. While Louise’s boyfriend, Jimmy (Michael Madsen), surprises Louise at a hotel with money for her (she had asked him to wire it to her), Thelma sleeps with J.D., who reveals he is a con artist who frequently conducts hold-ups. He even shows her his secrets.

Of course, in the morning, J.D. is missing, with all the money that Jimmy has just given to Louise. Before Louise can figure out their next move, Thelma uses the skills J.D. taught her and robs a convenience store. This incident helps the FBI come closer to finding them; already the FBI has launched an investigation, led by Detective Slocumb (Harvey Keitel) that has involved tapping Darryl’s phone. At one point, Slocumb is on the phone with Louise and tells her that he has learned what happened in Texas—that she was raped there—and that he wants to help her and Thelma out, but Louise doesn’t trust him and continues to run.

Eventually, the women are stopped by a state trooper, but they have become such good cons themselves that they manage to lock him in his own trunk and take his gun. Next, Thelma and Louise encounter a vulgar truck driver, so they tell him to pull over. The truck driver, thinking he’s going to get lucky (yes, he for some reason was interested in getting lucky with Susan Sarandon), gets out of his truck and approaches them, but instead, Thelma and Louise shoot at the truck’s tanker, causing it to explode.

He makes an obscene gesture. Thelma and Louise blow up his truck. Tit for tat.Pathé Entertainment/YouTube

The women’s luck runs out, however, as they are cornered by a fleet of police officers at the Grand Canyon. Slocumb arrives and tries to stop Thelma and Louise. Rather than face prison, however, Thelma and Louise decide to “keep going” and drive over the edge of the canyon. The film freeze frames the car over the canyon and fades to white.

Thelma and Louise attempt to flee to Mexico in a 1966 Ford Thunderbird Convertible, and, aside from being a particularly bad ass car, it is integral to the plot. While in most road trip movies, the car serves as a way to get the characters from one place to the next, the Thunderbird is the women’s only hope for survival, and, ultimately, their coffin.

But the car symbolizes so much more for both of them, especially Thelma. It is their escape from the imprisonment of their former lives—from Louise’s dead-end job waitressing and from Thelma’s unhappy marriage. When they drive off the canyon’s edge in the Thunderbird, it is important to note that Thelma says that she wants to “keep going” rather than end it. For them, as long as they continue in the Ford Thunderbird, they haven’t lost. To climb out of the car and surrender would be to return to a life of imprisonment, but to “keep going” is to remain free.

Thelma & Louise is so much more than a “chick flick” or “feminist propaganda.” Sure, it is a film about two strong women who escape oppression and seal their own fates, but it is also a film that explores difficult choices and what it means to be free. It examines the strength of friendship and the value in independence. And, to be frank, it is just an absolutely wonderful cinematic endeavor.

The acting is brilliant all around. Sarandon and Davis have incredible chemistry and are completely believable as two women who made a mistake and are now desperate to evade the ramifications. McDonald is hilarious as the dimwitted and controlling husband, and Keitel, as usual, is good in his role. Brad Pitt perhaps owes the most to this film, as it was his first major motion picture role. His beautifully delivered performance helped ensure he’d stick around on the big screen.

If you’re looking for a happy-go-lucky film, this is not your cup of tea. For a feel-good flick, check out Little Miss Sunshine or Away We Go, or if you’re looking to laugh your butt off, try Rat Race or Dumb and Dumber. But if you want a challenging film with great characters, a great story, and some honest reflection, then give this one a shot.